Moses And The Misfits
Clown Shoes 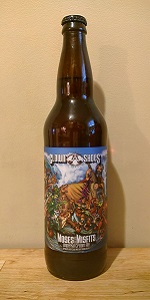 Notes: Soulful tunes and great beer touch the best part of us here at Clown Shoes. Moses and the Misfits is an Imperial Cream Ale with cacao nibs and vanilla beans added for a unique contrast in flavor, and it was brewed in celebration of our 6th anniversary. We encourage those who drink this beer to tune into the music they love most and join the misfits of the Clown Shoes brigade.
View: More Beers | Place Reviews
Recent ratings and reviews. | Log in to view more ratings + sorting options.
Rated: 3.63 by emptyglassagain from Massachusetts

3.65/5  rDev -0.5%
look: 4.5 | smell: 3.75 | taste: 3.5 | feel: 3.75 | overall: 3.5
"Soulful tunes and great beer touch the best part of us here at Clown Shoes. Moses and the Misfits is an Imperial Cream Ale with cacao nibs and vanilla beans added for a unique contrast in flavor, and it was brewed in celebration of our 6th anniversary. We encourage those who drink this beer to tune into the music they love most and join the misfits of the Clown Shoes brigade." Brewed in the style of a Cream Ale, available in 22 oz. bottles and on limited draft. 6th Anniversary limited release.

Poured from a 22 oz. bottle to a tulip glass.

(Appearance) Pours a smooth, frothy foam head of a pastel white color over a densely hazy amber body with relaxed, abundant carbonation. Retention is very good and lacing is light and patchy. 4.5

(Smell) Light aroma with malt tones of pale, wheat and pilsner malt with a gentle sweetness and a soft hop presence with notes of grass, citrus pith and floral hop notes with a light bitterness. No suggestion of vanilla nor cacao nibs is present in the aroma. Potency is moderate. 3.75

(Taste) Largely follows the aroma, with slightly more voluminous flavor- malt characters of pilsner, malted wheat and pale grains, and a gently bitter finish with little to no discernible hop flavor. Cacao is not discernible in the flavor of this beer, although a hint of vanilla bean peeks through ever subtly. Finishes clean with a decided lightness. 3.5

(Mouthfeel) Texture is slick, clean and mildly dry. Carbonation is moderate, generating a medium frothiness and a moderately crisp finish. Body is medium for the style, light+ overall. Balance is nearly even sweet to malt grain character and hoppy bitterness. Alcohol presence is light and there are no off characters. 3.75

(Overall) A nice malt character to it, but a somewhat disappointing hop profile that doesn't contribute much to the beer otherwise. The most unique additives of vanilla and cacao do not come through strongly in this beer. Drinks light and clean, but falls short of being memorable, even within the mark of the style. 3.5

Reviewed by justintcoons from Pennsylvania

Overall
At 9.1% it still goes down easy like a Cream Ale should.

A- The label looks good, it goes great with the name and it's eye catching. It poured a slightly hazy burnt orange color that took on more of a golden orange color when held to the light with almost a fingers worth of slightly creamy and bubbly almost tan head that died down to a thin ring that eventually faded away and it left some nice rings of lacing behind. This is a good looking beer, I have no complaints.

S- The aroma starts off with a slightly higher amount of medium sweetness with the chocolate being the first to show up, it's on the light side but it's noticeable and it's followed by the vanilla which is also on the lighter side and it showed up just a little more than the chocolate. Towards the end there's a sweet grain and a little bit of a creamy aroma. The aroma is nice, but I was expecting it to be a little bolder.

T- The taste seems to be fairly similar to the aroma and it starts off with a lower amount of high sweetness with the malts being the first to show up and they impart a typical cream ale flavor, but the sweetness is higher with that grainy malt and creamy flavors coming through. Up next comes some doughy and slightly estery yeast flavor that goes right into the chocolate which is noticeable and it's followed by the vanilla which is barely noticeable and it's hard to tell it's there. On the finish there's a medium amount of bitterness with a creamy sweet grainy and slight vanilla like aftertaste. This is a decent beer, but I wish it was less sweet with more of those chocolate and vanilla flavors coming through.

M- Smooth, a little creamy, a little crisp, on the slightly thicker side of being medium bodied with a slightly higher amount of medium carbonation. The mouthfeel is nice and it works well with this beer.

Overall I thought this beer was decent and I thought it was pretty close to being an average example of the style, it's not bad, but the flavors aren't as balanced as I think they should be. This beer had ok drinkability, one glass is enough for me. What I like the most about this beer is the appearance, it's a good looking beer. What I like the least about this beer is that it didn't have less sweetness with more cocoa and vanilla coming through. I wold buy this beer again if they change it, but not how it is and I can't say I would recommend it. All in all this was a rare let down from Clown Shoes, I like the out of the box thinking, but I think it could have been executed just a little better. All in all this is one of my least favorite beers from Clown Shoes and it's average at best for the style. Better luck next time guys, this one could use some work.