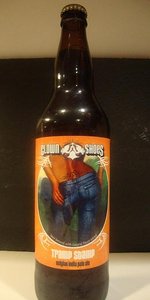 Usually prefer other style IPAs but this was a solid Belgium. Also wonder if date affected taste.

This Belgian IPA pours a slightly opaque, orange color with a medium to thin white head that leaves a nice lacing. The smell is hoppy pine and a little orange. I’ve kind of been into Belgian IPAs lately and some that I’ve tried I’ve found to be better than the sum of their parts. I’ve never tried this brewery, but I thought I would give it a go. The taste isn’t as complex as some of the style that I’ve tried. It tastes of orange, faint yeasty malts, and a generous amount of hops that leaves a bitter aftertaste. This is more an IPA than a Belgian. Besides the orange there isn’t really anything that separates this from a normal IPA and really just a fairly average one at that. Not bad by any measure, but not the best example of the style that I’ve tried either. Stone Cali-Belgique and Green Flash Le Freak are much better for example.

Only ever had one other brew outta these guys ( Undead Party crasher ) and it was quite phenomenal. I found a single of this at my local bottle shop and I immediately thought somebody leaked a picture of your wifes ass to be put on a beer bottle but I was wrong since this one actually has a touch of definition though flat. Let's drink it.

Look - From the twelve ounce bottle poured at a moderate pace into a dimpled pint glass. Beer pours that trademark Californian sunset through the cloudburst type of orange that you come to expect out of most ipas these days. For being our of Massachusetts they sure got the Best Coast vibe down with the looks. The head is a complete monster, firming quickly like a mountain range of gargantuan proportions and dying down into pits amongst craters. Be careful pouring this guy, those mountains wish to form quickly and without forgiveness. Carbonation is as high as snoop dog. Lacing is sticky like the load of unborn children I left on your girlfriends stomach.

Smell - Melon. Melon. Melon. This beer smells like a fucking melon. With! Small hits of the expected yeast and a shake of pepper amongst the nostrils though without the sneezing. More melon. A few more melons. And last but not least,some melon. It uh..smells like melon is the main point I'm trying to get across here. Some citrus too.

Taste - Well would you believe it if I told you this beer has the most melon forward flavor I have ever come across in any beer in the history of my roughly five year craft beer drinking career? ( Damn I can rhyme! MC Tyler coming to a bar near you! ). In all seriousness, melon is truly dominant though it is met in a portion by the Belgian yeast that is very heavy though clean and prevelant without going barnyard. That pepper spice is nice for rounding things out. But still, more melon than a citra hopped melon pale ale I had a few weeks back.

Feel - The body on this brew lived up to my exact expectations given the flavor profile. Body is quite large and heavy like a reticulated python slithering across your shoulders. Moderate level of cream despite a thick cap which should make it heavy feeling though the carbonation is quite high meaning it cuts through that jazz. Yeast takes a dominance as it sits about 65/35 over the melon with some subtle mustard seed. Beer swallows between easy and moderate with a lingering fruity Belgian aspect.

Overall - Surely the best Belgian style ipa I have ever had and what makes this even better is the brew was bottled in September ( didn't see that until I was nearly done with the beer ). Clearly anything made Belgian can hold up longer than your American standard without a doubt. Maybe even got better with age, what the hell would I know. As always, try it out and come to your own conclusions .