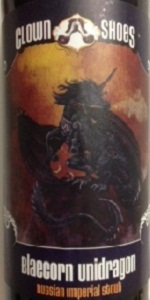 Notes: Brewed with a monstrous amount of malt and combined with aggressive American hops, this beer is powerful and complex and designed to age. Smokiness is subtle but present and blends nicely with the rich, dark flavors.
View: Beers | Place Reviews
Reviews: 392 | Ratings: 1,676 | Log in to view all ratings and sort
Reviews by beersis81:

A: Black as pitch. To match the horned beast portrayed on the label. Dense and creamy sandstone head expands over top the body resting for a forgotten length of time. Retracks to a filmy layer and some gentle lathery curtains close out the show.

S: The aroma is engulfed with darkly roasted barley notes of charcoal, dark chocolate, and house blend coffee. There is a touch of hop earthiness coming out as well. Not super but definitely very roasty with lots of blackened barley character.

T: I find the flavor to be bold and robust but just not all that in depth. There is significant char and roast to this with more restraint on the key notes of dark chocolate and coffee. This stout has an upper moderate amount of hop bitterness to it that constricts in tangent with some of that acrid smokiness. Has a few pine and earth elements sprinkled in. One thing I will say is this is dangerously drinkable with the ABV well hidden.

M: For a big bodied Imperial Stout this one maintains a nice creamy smooth experience across the palate. Seems soft and lighter with a good dose of bitterness to help dry out the finish. Kind of clean without much of any further impressions here.

D: Big and roasty with a nicely balanced body but lacking in much complexity. I was expecting more from this one actually. Seems every time I try to get into some Clown Shoes beers they come off a bit meh. Further research maybe required.

S: Found it hop forward. Herbal and orange notes. Earthy chocolate and some leather. Quick scent if raisins. Complexity is there.

T: Warm chocolate malt. Brazen leather. Has some spiciness to it; not alcohol derived, has a sandalwood flavor. Hints of licorice and roasted coffee grounds. Nice hop brightness that leaves a lingering grapefruit bitterness.

Bought a bottle at the Beer Shop in East Longmeadow. The beer has a pure black appearance with a slightly brown, medium-thick head and lacing. Aromas are very apparent with milk chocolate, coffee, and several spices like nutmeg. Taste follows the nose with a milky, creamy mix of milk and dark chocolate with malts. The mouthfeel dimension highlights a very creamy, but oddly light and somewhat refreshing texture. Overall, this is a fantastic beer across the board.

Bottle dated Feb, 2015:
Pours black with a decent growth of dark tan head. The head is a little bubbly, however (not creamy). After collecting at the sides, it does cling to the glass for decent lacing.

Nose is a coffee base, but a bit of spicy heat interests me (cinnamon, ginger?). There's also some smoke, and something I perceive as lemon-which seems odd.

Taste also has a coffee roast base, but the smoke I got from the nose is much more pronounced. I do get cinnamon also, and also a hint of chili pepper (with spice). Flavor engulfs my mouth, pretty full body (thins slightly as it warms). Warmth does smooth out the experience even more than it was at the start.

Really enjoyed this beer. I'm not sure if the smoke and spice are supposed to be there, but I hope so, as I expect to buy more because of those flavors.

A sleeper RIS that has won me over and become a go-to. Dark as pitch with a just thick enough mouthfeel and heavy lacing. Dark notes of earth, chocolate, espresso and hazelnut are well-balanced and come out more when the beer is warmer, when the smoky flavor also shines through. Just enough bitterness. Another hit by Clown Shoes. I see that some people have felt that this brewery has not impressed them, but I have had the exact opposite experience. I went initially with a negative bias from the first bottle for some reason and have had that completely disappear. Many of their beers are outstanding and a few have become all-time favorites... Cheers!

The pour is nearly jet black, opaque, and underneath a modest, foamy tan head.

Despite being almost a year old it maintains a lot of character in the aroma such as dark roasted malts, a touch of smokiness, sweetness, yeast, chocolate, and a low hop profile. No alcohol for 12.5%.

Medium to full body but it is also very smooth and mellow.

The taste has the same roasted dark malt qualities as the aroma suggests, low to no booze, a touch of chocolate, but a bigger earthy bitter finis than I expected. This aged well and I didn't have to do anything but buy it on clearance.

very difficult to find any faults with this one... I can't. amazing RIS and a go-to

22oz bottle, dated 3/3/15. Pours black with a small-medium sized dark khaki head; some lacing on the glass. Noticeable tiny carbonation bubbles but the head recedes quickly. Smells of mostly roasted malt and fresh hops with some dark fruit, licorice, bitter cocoa, and molasses. The taste follows exactly with roasted malt, hops, licorice, molasses, cocoa, and dark fruit. Moderate bitterness as expected with some sweetness and subtle drying. Below average body and above average carbonation. Overall, it has a good smell/flavor intensity and the roasted malt is spot on for the style.

A - Pitch black, opaque pour with a caramel colored soapy lacing ring, lots of legs a very viscous on the sides of the glass.

T - Lots of dark chocolate and charcoal bitterness, some smokiness, lingering bitter dark chocolate, some heat from the ABV, and some solvent character.

M - Very dry finish, coats the mouth with dark chocolate char and gives a little bit of a raspy feeling.

O - This could probably stand to be aged for awhile, it's a little harsh being this young. Last time I had one of these bottles I let it sit for 1.5-2 yrs. and there was too much molasses presence, one of these days I'll get it right with this beer. Not worth the $12 price tag.

Serving: Bomber into a goblet.

A: Extremely dark brown, opaque, almost black. Has about an eighth inch of head on it, with a fair amount of carbonation seen coming up from the bottom. It laces the glass up fairly nicely.

T: Slightly bitter, with a huge roasted malt taste. Has hints of oak and smoke as well. Pretty aggressively hopped. This would probably mellow out a lot in a year or two. Very nice.

O: Very good imperial stout. Another reviewer said it tastes burnt and boozy. Was it the same batch? None of that here! Cheers!

This is the first beer I've had from Clown Shoes, and I enjoyed it very much. I got quite a bit of roasted chocolate on this one with light hints of alcohol.

Appearance: Blaecorn Unidragon looks pitch black in the glass, but sadly a strong back light reveals a wide ring of deep red along the edges. A rough pour yields a massive, creamy, tan coloured head that displays great retention for a 12,5% beer and leaves chunky rings of lace clinging to the glass.

Smell: Mmmm, this smells pretty damn good! Notes include: Dark chocolate, cocoa, dark caramel, sweet dark fruits (distinct raisin and black cherries), roasted malt, a touch of smoke, roasted nuts, a little liquorice, some char, and an earthy hop character. As the beer warms, the dark fruits seem to become more dominant. A hint of the 12,5% is noted, but it is far from bothersome.

Taste: Wow, this has far more roasted malt character than I expected and feels almost European in this respect. Flavour notes include: Dark roasted malt, a little char, a hint of smoke, dark chocolate, dark caramel, sweet dark fruits and a touch of earthy hops in the finish. The finish is moderately bitter, with a lingering roasted flavour.

Mouthfeel: Medium-full bodied, with a fairly high level of smooth carbonation. I think a fuller, heavy body would have made a huge difference to overall feel of the beer.

Overall: Blaecorn Unidragon is a very tasty imperial stout, that seems to fall midway between European and American styles. I have a feeling that a peated whisky barrel aged version would be outstanding.

Poured into Bruery tulips. Color is black. Not much light going through held under a light. Tan head that lingers for a while.

Smells of dark fruits, a little alcohol. Taste is very tobacco and leather with some espresso. Rich but not sweet. Overall a very solid stout.

This is my first from Clown Shoes and I'm interested in trying a few more of their offerings.