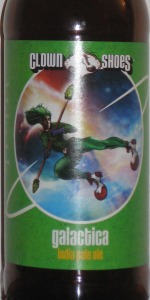 A 12 fl oz bottle poured into a Spiegelau IPA glass. Strangely no bottled on date considering all my other Clown Shoes beer show it on the neck.

Appearance: The beer poured a hazy dark orangey amber colour with a slightly more than one finger off-white head that leaves stringy lacing.

Overall: This was nice, as it wasn’t overly caramel-ly. A nicely balanced Double IPA.

Pairs well with cannabis. Will get around to doing full review at some point but it's like whatever maan. Overall very good stuff. Had Galactica with Hoptinum and while I mean no disrespect I preferred the former ifi had to choose. I'm feeling strong 4.25 to light 4.5 on this one. in other words i agree with the B

Poured from a 12oz bottle (bottled 16Mar15) into a Spiegelau IPA glass.
LOOK: Pours with two finger's worth of off-white foam that shrinks down to a finger's worth within two minutes. Honey orange in color with a moderate amount of cloudiness. Lacing is nice and high. Of course bubbles are in excess. Something has to support that sexy head.
SMELL: Has mild aromas of bready and caramelized malts, citrusy and floral hops, mango, peach, and apricots that mix with a hint of earthy yeast.
TASTE: Initial taste is a strong combination of bready malts, mango, peach, apricot, and citrusy hop flavors. Mild caramelized malt and floral hop flavors enter immediately after as citrusy hop and fruit flavors persist, but bready malt flavors shrivel down to mild. A touch of smokiness and earthy yeast flavors seal off the final taste.
FEEL: This definitely a full-bodied IPA. Very creamy and smooth with little carbonation. But of course, it has that infamously and overly dry finish that is known from IPAs.
NOTE: This was a very malty IPA. Most IPA fans would probably not like the malty unbalance, but I'm not an IPA fan; I'm a beer fan. And I loved it.

Pours cloudy copper/amber color with a thick 2 finger foamy off white head that was full of bubbles of all sizes which popped and moved as the head dissipated very slowly, leaving foam craters and really impressive foamy lacing coating the sides. A layer stuck around on top for a while, adding to the overall good looks of this brew.

Taste is very similar to the nose with fresh citrus fruit, dank hops, sweet malt and graham cracker up front, followed by orange peel, grapefruit, tropical fruit, tangerine, guava, toffee, caramel, fresh cut grass, peppery spices, buttery biscuit, toasted grains and finally some piney hops and pine cone notes. The Galaxy hops bring a lot of zest which blends well with the sweet, bready malt base. Seem like more floral notes and some yeast comes out as it warms, making it even more complex and hiding the 8% ABV very nicely.

I’ve started trying beers by Clown Shoes one by one and so far they are definitely above average, but not stellar, but then again I have been spoiled by giants such as Ommegang, Great Divide, and Sierra Nevada. This American Double/Imperial IPA weighs in at 8.0% ABV which is on the low end or maybe about average alcohol content for Imperial IPAs

Look-It pours a mildly hazy orange golden amber color with no real head. The lacing is delicate and moist.

Smell-I smell bready yeast and malts with noticeable grapefruit, peach, and apricots. The aroma is not very bitter smelling, but definitely foretells of an enhanced flavor. Let’s see what it tastes like.

Taste-It taste of caramel and bready yeast malts that the nose picked up on, but it is more noticeable than the nose told. Then you get floral and citrus hops that shine through on the tongue obviously and are composed of grapefruit, peach, and apricots. The floral component also has slight clover, but that shows up on the back palate after the medium carbonation fizzles away which is nice timing. The bite of the alcohol is a bit more substantial than I anticipated from a medium level 8% and plays well with the carbonation on the tongue.

Mouthfeel-It is not syrupy which I usually hate, but this one is more of a full-bodied crème type of beer with plenty of hops to give it a well-balanced experience. The coating on the tongue lingers for a long time and is pleasantly bitter but is kissed by peaches and crème, dare I say (LOL!). And lastly, I even feel the fizz after
several moments which is nice.

Overall-This beer started out a bit dull, but quickly turned around into a B+/A- class beer that is able to compete with a large fraction of Imperial IPAs out there, however it isn’t on par with giants such as Rebel Rouser Sam Adams or Rampant IPA by New Belgium. You’ll enjoy this one though. Cheers!

Hop profile is uninteresting and the hop flavours get drowned out by aggressive bitterness. Malt backbone drifts towards English IPA territory, hitting on caramalt and biscuit if not toffee; this would be far better with all pale malt. I suspect some crystal was used. Malts seem mismatched to the hops.

Mouthfeel is dragging, scraping, rough, and somewhat stale...did I get an old can?

Tastes like a homebrew imperial English IPA. Not a beer I'd buy again at its unreasonably high price. A poor expression of a style oversaturated with myriad superior offerings...I'm surprised this even made it past QC.

Pours a clear (mostly, lots of very fine sediment is in suspension) copper with two fingers of creamy off-white head, settles slowly with thick rings trailing partway down the glass. Smell: dried grass, pine, whole grapefruit, background stone fruit sweetness. Taste: background is lightly toasted grain and steely caramel. Marjoram, candied grapefruit rind, mildly astringent pine upfront. A little overripe cantaloupe as it opens up. Finishes sticky with resin and grapefruit lingering. Just shy of full bodied, with a velvety feel. Canned 7/14. I assumed it would be galaxy heavy based on the name, but it's just not coming through. This is way too herbal / grassy / piney, rather than the galaxy sweet spot of tropical / citrus / melon. One of those "can't go wrong" hops that apparently can go wrong. Still, this is a decent throwback east coast DIPA.

355ml Bottle from the Brewdog Online Shop:
Bright looking amber with a 2.5cm head that is creamy & white, holding well with plenty of lacing sticking to the sides of the glass.

Fruity with strong pine resin coming through along with some tropical fruits that includes some grapefruit, orange & a little citrus with some caramel as well & to a lesser extent some floral notes.

Bitter & hoppy with the grapefruit & citrus. There is caramel & citrus. Some malts come through as well with some nice hops throughout.

Smooth & bitter with a medium bodied & similar carbonation. There is a great balance to this one with touches of sweetness coming through in places & the finish is a crisp and slightly dry.

Very American IPA in style with plenty of bitterness & tropical fruit notes but one of the best things about this one was how well it managed to hide the alcohol content of the beer because you really couldn't tell this one was an 8% abv. beer; it was so easy to drink.

Nice. My first offering from clown shoes, and it's not too damn shabby. Nice lean malt profile and good amount of hops add to a very satisfying beer.

There's a curious look to this DIPA as far as the color. It's a muddy sort of murky dark orange, almost brown but closer to it in the middle, thick and muddled. Due to the substantial thickness of the body, it's very opaque. The head is a creamy tan 1/2 finger or so with pretty good retention with a remaining foam, strong at the edges, sticking moderate patching to the glass.
I haven't smelled fresh pine like this in a while, and I'm brought back to earlier days as IPAs and DIPAs really started to get good; it's got more raw, fresh, crisp hops, and plenty, than a lot these days. Even as they get bigger, bolder, and more complex, this one hearkens back to some of the best at the beginning of the craft movement. It's got only enough malts, possibly crystal and caramel, to balance the hops and let them take charge completely. Then it's sticky pine resin, fresh hop oils, and raw, pithy citrus rind, as well as a little bit of a peppery bite.
Resinous hop oils coat the tongue as well, a little bready and caramel sweetness rolling in to balance the bitterness and the dryness of the pith. Something like toffee and nuts are also here, which I didn't get from the aroma. Hops still rule, but it's a complete flavor.
A medium body holds up nicely, while the crispness is light but firm and never tapers off. It moves with the carbonation to make it very smooth, creamy even, without being too filling.

on draft, fairly hop forward for dipa. not s bad thing though i usually prefer more malt balance. liked it a lot