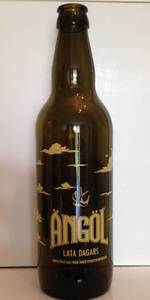 Taste is floral, with a solid malt base giving a bit of sweetness and caramel. Nicely balanced.

This is NOT and American IPA, but a well balanced, classic British one. Easy to drink and way more malty than it's Yankee counterparts.

Reviewed as an English IPA. Although there are some New Zeeland hops in this one, the Old World hops dominates.

The hazy liquid is dark amber. The high head is off-white and compact. Lots of thick lacing when it slowly sinks down.

Hops dominates the (rather mild) smell: Hay, dried citric fruits and some caramel.

The taste starts with a fine bitterness. Growing sweet notes of rye bread, the bitterness becomes a bit chemical after a while: Notes of dried flowers and dandelions. Medium body. The aftertaste got growing hoppy notes and crisp bread. Citric peels and bitter lecture in the background. The spicy-bitter finish got a touch of salt.

The carbonation is light; the smooth long-lived bubbles are mid-sized.

A nice old-fashioned IPA, like they used to be in the 90’s.

A: Obviously Johan put a little wheat in this one - the massive tan head fills the glass. After a while the cloudy orange liquid rises as the head settles, but slowly, leaving great lacings.

T: The malt feels a little lighter in comparison with the smell, still sweet and still caramelly, but lighter. The hops dominates and there is both floral as well as bitter hops; pineapple, grapefruit, ripe oranges, elder-flowers as well as nettles and grass. Some cloves.

M: Body is a little too thin for me, but since the carbonation is mild it feels kind of well balanced anyways. Aftertaste is mostly bitter but holds a mild citric tone as well.

O: This is one of the best products from Ängö so far. Perhaps a little more malt would have brought more body (and higher ABV) and had added to the complexity. But still, this is a very nice beer.

Lata Dagars IPA from Ängöl
Beer rating: 3.68 out of 5 with 5 ratings