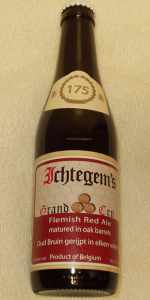 I found this at Monks café.

This beer looks black in the dark back bar at Monks, but when held to the light, it glows a lovely burgundy. The head consists of a creamy collar that left a slight bit of lace.

Smells of a tart dry raspberry and cherry with a faint dry banana. Im also getting a hint of rye. Sadly, its also slightly metallic.

Tastes of tart raspberries and cherries that fades to dry with a little sour milk, oak and an almost Bret-like sourness.

The mouth feel is light to medium bodied with a thickening micro bubble.

This sourness of this one is unique. Try it if you like the style for sure.

Had this for the first time yesterday at the Cloverleaf. I hadn't had a Flanders Oud Bruin in quite some time but the appearance, taste, and range of flavors in this seemed pretty typical for the style. Combined with the relatively easygoing nature of this beer and the subdued alcoholic presence, the flavor profile was gently pleasing while just remaining complex enough to slow down and savor.

This poured a pinkish-brown (as odd as that sounds) with a good amount of carbonation to it but not a lot of head. Reminded me of champagne in quite a few ways except that this wasn't clear and there were some different flavors here. Raspberries, vinegar, a hint of nuts, and juice were all found here on top of a sweet base and the lightness of yeast. The degree of sourness here was good as this wasn't as heavy as similar beers that I've had from Europe and it went down as easily and nicely as I could picture for any example of this style.

Booze? It's here but like the hops. you'll never notice it. I haven't had much in the way of beers from Flanders or in a Flanders Oud Bruin style but this was much easier than I was led to have guessed and proof that more breweries should give something like this a go. The subtle complexity made me want more and if it was just a tad less potent, this would make for a fabulous session beer.

Pours a nice reddish brown with a full head. Lots of carbonation.
Overall a bit on the dry side with hints of rotting grapes and a nice sweet and sour note towards the finish. Smell is floral with only hints of caramel and malts. Not in the least bit heavy in the mouth and easy to drink.

Drinking one of these reminds me of a particular sparkling wine that many consume to ring in the New Year.

*did not mind would not buy*

taste: odd. some sort of chemical after taste. some sour, lots of thick almost blonde malts

Appearance. Pours a deep amber brown with over a finger of off white head that lasts a while and leaves some decent lace.

Overall. A bit too sweet for me. Tasted good but I won't be in a hurry to drink it again.

Strubbe's Ichtegem Flemish Red comes across as a more intense version relative to their Flemish Red Ale Grand Cru, and by intensity, I mean the noticeable "funk" and acidity in the aroma and taste. There is a definite bile or acrid urine component to the scent and flavor of this beer, but it's integrated fairly well, and I suspect that others would view it as fruit-like flavors. Somewhat amusing, I found this more palatable than the Two Brothers' Moaten, mostly because this actually had a character, whereas that beer was abnormally bland. An interesting Flemish Red, one I'd try again if it were free for the taking, but when I'm paying, I'll stick with Rodenbach or Jacobins.

Pours a 1cm head of light tan bubbles, very small and dense in size, with average retention. As the head descends to a ring around the glass, it leaves some significant streaks of lacing on the sides. Body is a rather dark brown for the style with few hints of red. Beer is also transparent, with light bringing out reddish hues and making some modest carbonation visible.

Aroma is somewhat harsh, with a definite bile or concentrated uric-acid-like component to it. This gives an emphasis of smelling more sour than it is. The strange acidity takes front billing, but behind it there's some very sweet raspberry and cherry esters, though no real oak presence. Despite the apparent unpalatability, I don't find this particularly unappealing.

The taste follows scent, with minerals and concentrated uric-acid tartness on the front of the palate. Fruit esters appear predominantly in mid-palate, sweet cherries mingled with ripe blackberries, over a base of soured malt base. Back of palate picks up chemical-like tartness, a bit like red wine, but still having that bile or uric acid-like component, along with continued brown malt sweetness. Overall, not particularly unpleasant, if you're into weird sour ales, but not something I'd necessarily seek out again, either.

Beer is medium-bodied with mid-level carbonation that creates a fairly creamy, smooth mouthfeel. Finish is dry, with little residual stickiness on the palate.

Where to start with this one. After drinking, i realized it may not be a style that I will covet in the future, but I will rate it for what it it.
Poured a rather cloudy, dark reddish brown with a nice head and lacing.
Smell was rather fruity and sour..hints of maybe pear and plums with a strong bite of sourness.
Taste was in a word....sour! More sour than any beer I have ever had. But thats what its supposed to be. Kind of reminded me of hard cider..with some oak melding through the sourness.
Mouthfeel was ok...not a beer I will buy again.

Poured an 11.2 oz. bottle into a tulip. A deep ruby brown color with a nice fluffy tan head. About a finger's worth of head, tight bubbled and clinging nicely to the glass.

Aroma is a sour oakiness with sweet toasted malt in the background. A very pleasant blend of sweet and sour, with the sour owning my olfactory glands at first and the sweetness just slithering through quietly. The oak aging is very evident here, and adds another aspect to the mix. Yes I've been smelling this for about ten minutes so far and have not taken a sip.

The taste is all about the sour funk. Sour fruitiness, with some sweetness as well and no bitterness in the end just a long dry sour finish. Did I mention this is sour? Some of the toasted oak is coming through at times and it adds a nice complexity, but I do not get the same balance and complexity that the aroma promises.

This is my first formal review of this style and only my second tasting of it. I am learning a great deal and enjoying every bit of it.

This Flanders Red is not heavy at all, and it does leave the mouth dry. A nice sipper though with some wine like qualities that one would not expect in a relatively low ABV beer.

The smell is tart with some acidity, brown sugar, and vinuous notes - Oak is mild.

The taste is sour notes (grapey) with caramelish brown sugar sweetness. Not as sour as some other examples. The oak is mild, but there. It has a soft sweet and sour finish.

It is light-bodied with some effervescence. Very smooth.

A very drinkable example of the style. A malty complexity balances out the tart, though doesn't overwhelm it. Alcohol is very well hidden. It's not as strong as some others, but it has a nice uniqueness and is very drinkable.