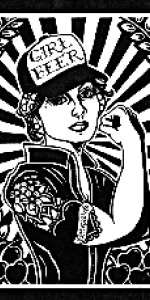 On tap at Parkway Tavern the other day.

The beer pours a solid gold color with good head retention and decent lacing. Alas, this was to be as good as things would get with this beer. On the nose, I get some light cherry, some light wheat and maybe a hint of light sour. On the palate, this stuff is just flat out lame. After taking one taste, I noted that this tasted like some lame cherry wheat, and the woman next to laughed, noting that she'd said exactly the same thing. So, this beer tastes like your standard american wheat (no clove, honey or other spices in this stuff), but with some cherry added to the mix. Whoopee! Mouthfeel is light, and the beer is undeniably watery. Alcohol is well integrated into the flavor profile I guess, but at 4.3% abv., what would you expect.

So, just how lame is this beer? At the Eastside club in Olympia the bartender poured me an extra portion of Duchesse Du Bourgone, so happy he was to have it rather than "that cherry shit" on tap any more. At the Parkway, when I asked to try a glass of the Cherry Fix, the bartender told me alright, but that the beer really wasn't all that great. Was I sure I wanted an entire glass? The bartender also mentioned that a lot of folks ordered the beer, just because it was made by Boneyard, leading to a lot of disappointed customers once they got their beer.

For anyone who likes "hell or high watermelon" from 21st amendment brewing, this beer should be right up your alley. It's got the same lame flavor profile, except there's cherry flavor in this beer, rather than watermelon. Other than that, the beers are practically identical.

Reviewed by vkv822 from Oregon

Taste is same as the nose, though the cherry seems to add a light sweetness more than a definite cherry note.

Reviewed by cbarrett4 from Oregon

I am a fan of lighter brews (4.3% abv on this one). But this beer didn't live up to my expectations.

Poured a good hue with light head and little lace. Hazy in appearance (wheat ale ya know). On the nose I get very, very light aromas of wheat, citrus, and not much else. On the palate the beer is straightforward and simple with more wheat, mild yeast, not really much else. I read that this was refermented with cherries but I never really found them in the aroma or flavor. I had three friends and we all concurred.

I appreciate the light style, but it really is simple and straightforward.

Reviewed by grittybrews from Washington

Moderate carbonation and a light (bordering on thin), creamy mouthfeel. Bread up front with a touch of honey and barely a hint of the cherry from the nose.

Nice refreshing wheat beer character, and the touch of cherry aroma keeps things interesting. A nice girl beer indeed. "Strong Enough for a Man. But Made for a Woman."

taste - wheat and cherry, some sweetness

3.98/5  rDev +15%
look: 4 | smell: 3.5 | taste: 4 | feel: 4 | overall: 4.5
From this new brewery, Girl Beer is a wheat ale with some cherries added in the secondary fermentation. Served in straight pint glass. Poured a dark golden amber with about an inch of white head that had good retention and moderate lacing.

The aroma is nice crisp wheat, with a gentle scent of cherries in the background. The flavor is more evenly split between the wheat and the cherries.

The body is light and crisp, with a touch of sweetness in the background. Drinkability is excellent, especially during the warmer weather. This brewery is new and small, I think you'll being hearing more of them soon. Worth trying when you see it.