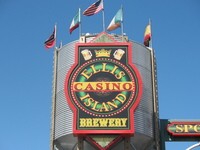 I was in town for the better part of a week, just around the corner at the Tuscany for a conference. I've been here before many years ago, back when we used to hold the March Madness event in Las Vegas (before we realized Reno was better for so many not reasons, but most significantly, the beer is better and you get more bang for the buck). Easy enough to find, one street over from the strip, kind of close to the corner of Koval and Flamingo as I recall. I like how there's a divey strip club and divey brewery on each side of my hotel. No need to drive. . .

So I saunter in, and its really dark, kind of like Big Dogs was. Its Vegas I guess, if you're not the Venetian I guess, why not dim the lights and help yourself out image wise I guess. Another negative for me, is the clientele is largely made up of non beer centric hick and inner city rejects from SoCal for the most part. Expect some strange looks hovering between "the strip is that way" and "i wanna watch you strip this way".

Drank every beer they had, none of them even approached being impressive, the stout achieved average land. Nothing exotic. Started having flashbacks of being here in 2005 or so for some cheap grub late night.

Service doesn't really seem too enthused when you ask some simple beer questions, but its a casino first, brewery is kind of the afterthought it seems. Beers are like all from the same yeast strain and beer kit it seems, unadventurous, lacking hops, carbonation, ingredients. . .

Absolutely horrific selection of shit even worse than BMC in terms of bottle selection. And yet it is still better than Sin City Brewing.

Strange place but a must stop whenever I go to Vegas. Can't beat the price for their brews - yeah I've tasted much better but when you have their BBQ chicken and ribs, it goes down much smoother ,plus it also goes well when you are being entertained at some of the best karaoke you'll ever see in the bar

12/15/17: Been coming here for over 25 years. Christmas time means Ellis Island Egg Nog, and while beyond the scope of BA, this is one of my favorite egg nogs and a great Vegas Christmas tradition, if Vegas can have Christmas traditions. This is one of the first "breweries" I went to decades ago. Beer is pretty much the same since then. Their Hefe Weiss is there best offering, had one on this night to back up the Egg Nog. Very light, both in aroma and taste. They have the steak special and BBQ which is OK, and several other great offerings at their diner. Overall nice dive near the strip, not the greatest beer by any means, but friendly staff and folks looking for a cheap and fun night out. Been going here for over 25 years, hope to be going over 50 more!

Stop #514 on my world brewery tour. If you walk through Bally's on the strip all the way to the back, you can come out pretty close to Ellis Island. On my visit in late August '17, they were putting in some sort of front patio which would be nice. Brewery is on display inside in front corner. You can even sit at a table by the viewing windows with no video poker. Beers are $2.50 all the time which is great. I had a very good hefe and when I ordered the IPA the server said it might have been an off batch and let me taste it (it was off so I got another hefe. They had three or so other beers of theirs which I did not have.

I get both a real old school Cheers sort of vibe out of this place, plus a large scale family restaurant nearing Applebee's, except for the fact that there are slot machines and even table games filling the right half of the establishment. This place feels like old Vegas, which is nice considering it's right up against new Vegas, so if you don't have time to go down to the older casinos this might give you a touch of that atmosphere for a mere moment.

The beer they brew here isn't bad, but they only had two selections on draft when I showed up, and the rest were BMCs. The focus here really isn't the beer, it's the massive, old school meat and potato dishes they serve up, complete with classic (albeit corny) pre-meal soup or salad choices which, in and of themselves, are fucking gigantic and will fill you up if this isn't how you eat on a daily basis. Regardless, come here for prime rib and steak, or not at all, but at least you can wash it down with some freshly made brew if you so desire.

Service is less than meh, forgetful, inattentive, and downright incorrect, albeit courteous--at least if you come here midday. Not sure what it's like at night, as there are too many things to enjoy on the strip and elsewhere.

Have driven by this place on every trip to Vegas and always wondered what it was like. Always noted the reviews were pretty bad. I was staying less than a mile away and have some time to kill...stopped by. Place was buzzing. Looks like a lot of the people were locals. Couldn't say for sure, but that's what it seemed. A decent mix of ages and types of people here. Young, old, smokers, etc.

Sat down to play some $5 blackjack. Service was a little slow, but friendly. Ordered one of their Hefe's. Not great, but, as long as your gambling, they are comped. Overall, I tried 5 different beers. None of them were more than average in rating.

Staff were very friendly. I got the "blackjack of the day" and won a free 64oz growler of any beer I wanted. Got the IPA, which I gave away to a buddy that came and visited later that day.

Overall, this place, if comparing to your standard brewery, is pretty much a dump. If you're comparing it to a low-cost, Vegas hangout, is pretty fun. Don't take your new girlfriend there to impress her, but if you want to kill some time and try something different, give it a shot. I enjoyed myself.

I am guessing this is what brewpubs look like in Las Vegas. The Ellis Island casino is one block off the Vegas strip and has that dated casino feel.

It is old and full of locals with a main bar in the center of the casino that reminded me of Applebee's for some reason. There is another bar and a few eateries on the outside, but I came to drink.

The service is super friendly, but the quick Vegas style. They have their standard styles, which is fine, traditional but boring. Their IPA was below average but their stout was above average. Nothing was impressive, but for Vegas, this is not a terrible stop.

Price is perfect, $2 beers for 22oz while I was there.

This is a very good brewpub in a casino off the Strip and thus overall has very typical Las Vegas casino vibe and layout- a casino ringed with places to eat and drink, in this case on the smaller scale since this is not one of the big-name places. It has the basic vibe to go with that and also all the smoke, but the bar/dining room part is pretty good, with a nice feel closed in and like a "normal" bar/pub. It's dark, with a low ceiling and some nice seating.

Service we had was good and very friendly and efficient.

The beer selection is limited to a few standards - amber lager, stout, IPA, the like. It is not large or varied. However, the beers we had were truly very, very good - straightforward but solid, characterful, tasty, well-rounded and well-balanced, and both good with food and good session beers.

We had only appetizers and sides such as onion rings and fries, but they were all excellent.