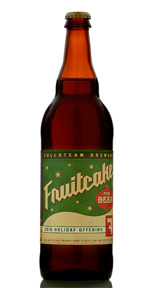 I do love a good bourbon barrel aged old ale, and with figs and chestnuts added it must be interesting. 2013 vintage, thanks to Beerness for this one.

A loud pssssttt lets me know there's plenty of carbonation in there, and big quickly rising fizzy bubbly head also tells me that, which hits a 2 finger quickly fading bubble bursting head leaving whisps of lacing, but continually reinforced with streaming bubbles, a tornado of streaming bubbles through the fairly hazy darker amber reddish colored beer. The bubbles streaming from the etch in my Tree House tulip are going up at a crazy rate, the head is actually growing now as a column of fizzy bubbles pushes up in the middle. either infected or just way overcarbonated.

Nose brings a fruity effervescent note, a yeasty like way over yeast, possible infection note but hard to tell at this point. Under that is a mild sweet malt, a little fig fruit, I can't get through the damn head to get a real aroma, a little boozy note with some phenolic touches, a mild smokey note, very faint bourbony oaky barrel note. As it warms the bourbon barrel and vanilla start to finally come through, as well as more of the fig and chestnut.

Taste brings a base decent beer but some possible infection notes as well, either the wrong funky yeast really took over way too much, or some infection came through. very effervescent, tingly carbonation and some warming tingly booze with that, mild phenolic note. The base beer is decent but the smoke just smashes it, lots of fruity notes with lots of fig and raisins, a touch of a chestnut note and nutty flavors, some caramel and soft malts, lots of smoked malt as well, like chimney smoke, or smoldering log and peat, hint of biscuit and some nutty toffee, mild syrupy sweet tones and molasses, smoked molasses. A hint of a bitterness comes through, mild woody esters, a touch of oak and faint bourbon, a bit of an alcoholic bourbon. The infection yeast flavor, or runaway yeast flavor is fairly strong at first, but eventually gives way to the sweet sticky malt components, which finish sticky and syrupy, still sweet, a mild more oak and wood tannin, bit more of the fig and touch of nut note, and tons of smoke, tannic smoke again chimney. Note that as it warms that possible infection disappears, it's just over yeasted, most likely note attenuated enough before bottled and hte yeast just took over, the bourbon eventually comes out a bit more, with more vanilla, and still lots of smoke, but no infection.

Mouth is fairly full bod, a bit syrupy and sticky, actually quite sticky and syrupy on the finish, way too much popping carbonation too, mild warming booze.

Overall, sigh, it seems like it would have been a nice beer without the runaway over crazy yeast or possible infection, it's not like a crazy funky Brett or bacterial infection, just like a funky yeast character that just went rampant, so possibly the wrong yeast got into it and just went to town. very little bourbon or barrel, decent figs at least, OK on the malt, but way too syrupy and sticky too, and the smoke just destroys anything else that wants to come out. Note again, not really infected, just under attenuated bottling with rampant yeast, and chemically smoked characters, so not the best beer but not as bad as I initially thought.

Clear, dark copper shines brightly. A Dogfish Head snifter is capped by a quarter inch of creamy ochre for a long time, eventually depositing light lacing above a viscous film.

A smoky character comes through toasted malt. Vanilla and strong oak are also present in this somewhat sweet profile. Sadly, no figs or nuts can be found though warmth does bring out the light aroma of dates.

The flavor profile generally follows the nose, showcasing sweet dates and toasted malt. Again, no nuts, but there is a suggestion of bourbon. The finish is sweet, culminating in a touch of acidity. As this beer warms, smokiness becomes more pronounced, building to a primary player.

Alcohol is present, though less than anticipated, in this medium-bodied, silky smooth beer. Carbonation is low, helping to accentuate the sipping qualities.

Full Steam consistently produces good beer, and this one is worthy of their reputation. Thank you for helping to promote the poor fruitcake to its former place of honor. Being a fan of good fruitcake, this one would pair well with good friends as a holiday treat.

Smells like mold and bandaids. Taste like sweet maltiness and bandaids. Mouthfeel is good. The recipe change for this beer was a huge mistake. Peated malt in a beer called Fruitcake...Terrible decision. Last year was really good, this year is a drain pour. Huge disappointment. Please go back to the old recipe...

Poured from a bomber into a shaker pint, the beer is a vibrant, crystal clear, brown-caramel coloring with a low profile, small bubbled, filmy, off-white head that quickly settles into a filmy surface coating. Aromas of rich, old world fruit, including date and fig, with a toasted and roasted nut sweetness, and a subtle bitterness throughout. Smells warm, rich, and inviting. Flavors are super-rich forward, with heavy fig character and a solid chestnut character. The fig really takes over, with a richness and layered character that avoids overpowering somehow. Bitterness, smoke, and roast characteristics help to balance, but this one is a heavy hitter throughout. Robust and smooth bodied, with a roasted, richly sweet, and slightly bitter aftertaste, with hints of caramel, wood, and booze all coming through at the end. The finish is clean and crisp, with only hints of the rich old world fruit lingering on. This is a beast, but it sure as shit beats the hell out of the fruitcake I'm used to getting around the holidays!

Considered an old stock ale,I put it in the American Strong Ale category.Poured into an oversized wine glass a clear amber/bronze with a very well defined white creamy head,poured with a nice bead and nice head.Toasted oak and vanilla mixed with drunken figs in the nose,I like that the aromas showcase what's in the beer,it's pretty boozy.Very smooth and it feels lighter for a "bigger" beer,it slides down easy.Dark fruit and sweet alcohol on the palate,it's like a whiskey soaked fruitcake,to me it has more of a Canadian whiskey character to it with it's vanilla and fruitiness to it,the alcohol is prevelent.What a nice CHRISTmas eve beer to have, it's a sipper but not a heavy sleep inducer,another top notch Fullsteam offering.

This is a very interesting Old Ale aged in Oak Bourbon barrels with figs and chestnuts.

Pour is active. Burnt copper liquid gleams in the glass. But whoa, quick foaming frothy seafoam head lurches upward. Damn, stop pouring for a second! 2-finger pour brings forth a 4-finger head swirling and angry. Calms down in leass than a minute, and settles in to about a finger high. Nose brings some spicy, slightly saisony yeast qualities coupled with a nutty, Bourbon presence.

Taste is Bourbon (not overwhelming or hot), some spice notes hinting at allspice, cloves, maybe cinnamon. And then there's that yeasty aspect, although the saisony hints take a backseat in the flavor. Interesting. Not bad. Definitely unique. This is a flavor profile that normally can go very wrong for me in so many ways. But, this is still holding my interest. The more I sip, the more it warms, the more I find it, well...interesting. I never get any alcohol heat, yet the Bourbon is a constant. The spice stays there too as it finishes slightly viscous.

Overall, I liked this one, found it to be quite unique. Perhaps even a bit befuddling. Those of you interested in spiced holiday offerings will have a field day with this one.

After having the 2013 on-tap over the holidays, I was nervous about the 2012 bottle I had been stowing away. The 2013 version was a pretty unbearable smoky mess, but fortunately this was much better. It's still a touch smoky, but it's much more subtle and quite nice - i believe that flavor is coming from the chestnuts. Sweet, full bodied and a complexity of flavors. it doesn't remind me of a fruitcake, nor does it strike me as a holiday ale, but its pretty nice - booze, roasted chestnut, sweet stone fruit.

Taste a little fruitcake sums it up well. Oaky vanilla, caramel accent well and boldly. A great balance between the fruit, malt and barrel.

A tad above mid bodied. Carbonation about right. Warming; so a bit of a sipper.
Pretty nice, probably fits best in this category.

Appearance: Pours a golden burnt orange/yellow with a minimal head that lingers a bit.

Smell: Agree with a previous reviewer on the smell: smells a bit like a fruity vanilla yogurt at first, with hints of bourbon on the end of the nose.

Taste: Bourbon hits you up front, very warming. Nice oak flavors follow, and ends with the taste of figs. Beer tastes a lot higher than 9.5% to me.

Mouthfeel: Not highly carbonated, which I prefer in this style.

Not a bad beer, definitely a unique strong ale.