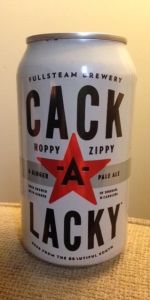 A- Pours a medium amber color with a 1/2 inch off-white head that retains well before becoming a thick ring around the edge of the glass and a mostly full sheet of surface foam. Frothy, semi-resilient lacing.

S- The sweet cereal grain malt fuses together with the ginger to create a unique aroma pairing that's very enjoyable. The ginger fume and hop fume work uncannily well together.

T- Same thing happens in the flavor as the bready, slightly sweet malt and herbal hop bitterness works as a solid template for the mild ginger to play off of. Incredibly drinkable while still obviously being interesting all the way through.

M- Tingly and vibrant from the hops and ginger. Medium carbonation and a body leaning toward the lighter side.

O- Why no one thought to do this sooner is beyond me. What's also beyond me is the appallingly low BA score for this beer. If you're a fan of ginger, do yourself a favor and pick this up if possible. An excellent session beer that pairs well with sushi.

duvel1979 from District of Columbia

Extremely clear gold colored brew. Head is a nice white wet-foamy looking topping. Aroma has a nice gingery underbelly with clean malt. Herbal and zesty as well. Taste is lightly sweet balanced by peppery ginger. Some grassy hop, a little bit of pine. Could use more substance by way of a bigger malt backbone and more hops to balance that. Seems like a pale ale spliced with a lager, but as is the ginger works very well. I'd like to see ginger in beers more often. Similarly on a side note I would like to see spicy peppers in beer more often. I think both add a a very nice touch when used right. Mouthfeel is a ok and easy to consume.

Crystal clear copper-tinted gold with a decent head of white foam that shrinks to a fine covering. Smells deeply of ginger, herbs, and wood with and overlying oily quality and warm, toasty malts. The ginger takes a welcome step back in the flavor allowing the malts to step up a bit resulting in a ginger snap cookie quality braced with a substantial peppery, piney hop bitterness. Very nice crisp, snappy mouthfeel. Not really my thing, but certainly worth a try, especially if you like ginger.

12 ounce can - $2.00 at Tasty Beverage Company in Asheville, North Carolina.

Taste: A lightly crackery pale maltiness given a slight cereal sweetness. Floral, citrusy hops infused with the essence of ginger. Not an overabundance of ginger, no, just a nice little taste and restrained spiciness. Medium-light degree of bitterness. Drying and crisp going into the finish with a final hint of cereal laden maltiness and gentle ginger.

As the American pale ale has become the playground on which the emboldened brewer tramples about with imagination, exploration, and risk; the Fullstream guys borrow the notions of "ginger ale" and give in a whole new meaning- a meaning that fits into today's craft beer climate.

Glowing with copper and gold, the common appearance to pale ale shares its spicy secrets early on the nose. Even as its caramelly undertow delivers a moderate malty-sweet base that's filled with graham cracker and angel food, the beer's ginger infusion takes the lead early and often.

With the caramels holding tight, the herbal and spicy waft is of growing pepper, ginger and tea-like herbs. Even a tangy lemon, woody and winy spins about to give the beer a taste of sassafrass and hot-toddies.

Deep in its taste, the sweetness slowly dissolves and carries with it much of the ale's body and balance which leaves the finish spicy, warm, peppery and with the familiar grapefruit and piney bitterness that reinforces its pale ale roots.

A big congratulatory not goes to Fullstream because of the impeccable balance that allows the ginger spice to parade around but keeps the taste grounded in its pale ale efforts. It makes me want to know what a more ginger-forward taste would do, but it also makes me fear that the pale ale would get lost. This tells me that the beer does exactly what it's supposed to do.

Drinks easy, but doesn't really deliver that well on taste; the can art is the best part of this beer

Not a bad summertime brew. Pours a slightly hazy bright gold color with a small white head (hard pour). Head retention is minimal and only bits of spotty lacing on the glass. Aroma is ginger and a little citrus hops. Pleasant but not that impressive. Taste is more of the same. The ginger is there but fairly subtle. a nice balance between citrus hops and malts (both mild). Glad to see that the ginger did not overpower the rest of the beer. Mouthfeel is a bit light but crisp with just the right amount of ginger flavoring. There are much more flavorful APAs out there but this is not bad with an interesting use of ginger. I would drink a few of these on a warm day.

Thanks to Alex and Beth for this one!

This one pours a slightly hazy washed-out copper brown with a frothy head that stuck around.

There's an enticing blend of ginger and fruit in the nose that works really well. I'm surprised this isn't attempted more often. However, the blend doesn't come together as well as one could hope, as a dry dirty wood sneaks in on the back end, roughing this one up a bit.

Tastes fruity and big, the ginger rounding the initial impression off suggesting fruit punch, but again, a dry shock of woody hops crushes the fruity goodness in the finish.

The mouthfeel is bold, enticing, and clean with a distant carbonation that fades in and out. Finishes super clean and dry. This seems to work especially well with the flavors at hand.

I think this was a great attempt, but the hop-profile needs to be tweaked. I think they could be on to something here.

Can at Husk, Charleston, SC

A: The beer is a little hazy amber yellow in color and has a moderate amount of visible carbonation. It poured with a quarter finger high off white head that died down, consistently leaving a short head covering the surface.
S: Light to moderate aromas of ginger are present in the nose.
T: The taste has flavors of ginger and notes of pale malts with a light amount of bitterness.
M: It feels light- to medium-bodied on the palate and has a moderate amount of carbonation.
O: This beer is easy to drink and doesn't have overwhelming flavors of ginger.