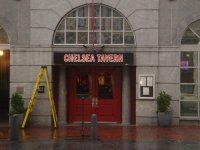 View: Place Reviews
Reviews: 4 | Ratings: 10 | Log in to view all ratings and sort

Have been here many, many times and felt a need to write an informative review. This place has been open almost 4 years, and has developed a GREAT group of "regulars" that hold down the fort through an ever-changing crew of patrons. Located across the street form Wilmington's Grand Opera House the crowd has wide-range, depending on the show.

Chef Dominic Fauser nails the beer-friendly items on the menu (mussels, pretzel crullers, fried pickles, etc.) as well as the rest of the well-rounded menu. Gluten Free menu is available, as are vegetarian & vegan options.

What about the beer? 30 craft beers on tap, nothing with a commercial here! 1 cask offering and almost 200 options in bottles and cans. Be sure to check out the beer cellar when you stop by or reserve it for an incredible private dining experience. Chelsea Tavern is one of Wilmington's Best Kept Secrets, for now.

Chelsea tavern - they should call it Chelsea laughvern. The laughs at the bar are non stop. Service a little slow at times. Great draft list, always good ipas. Menu changes regularly in a good way. Outdoor seating available. Great brunch - although avoid the big deuce, unless you want to receive some judgy comments from your server.

This is a great place to go on a weekend or weeknight... They also usually have the local game on one if the two tvs at the bar.

I've never felt so cheated buying a draft beer as I did yesterday at the Chelsea Tavern.

I need to take most of the blame for this, as I should have looked at the prices on the beer list before I ordered. I never expected that my 10oz (it might have been 12oz) snifter of Saison DuPont would be $10.00! When the bartender told me the price I thought I misheard him. Yea, that's right, $10.00 for less than a pint of beer.

I started looking closer at the bottle prices and noticed a bottle of Brookliner Hopfen-Weisse that I'd bought retail a few days before for $4.99 was $40.00.

Overall, the space was attractive and comfortable and I'd read good things about the food, but the beer prices will keep me from returning or recommending to anyone I know.

WOW! Can't believe I'm the first to review this place. Didn't add it though, so I'm guessing someone has at least been here before.

With Philly and very solid brewpubs in the area there really aren't any decent "beer bars" in the Delaware. The best I have come across so far was Firewaters, but it's not the best atmosphere, the staff wasn't all that knowledgeable, and of their 60+ beer selection 1/3rd were macros.

But enough about Firewaters, Chelsea Tavern:

Situated downtown on market street in the heart of bankers country this place sits. It has a few tables for outdoor seating, which I believe is the only place on market with this. (BTW, if you haven't been to Market lately it is going through a complete transformation and re-vitalization, check it out)

So I was here for a "happy hour", crowd was mostly business folks and employees from the opera house across the street. Everyone was super friendly, staff included. I didn't eat, but the guy sitting next to me was eating a brick oven baked pizza and said it was awesome.

They had about 20 or so beers on tap and about 30 bottled and canned beers. They also had a cask, which was Victory Hop Devil while I was there. They had some beers on tap, that I had not seen elsewhere, for example Saison du Buff, Sahtea, Delerium Tremens, Old Rasputin, Bear Republic and Blanche de Bruxelles to name a few. The only downside was some, not all, of the beers were a little over priced. For example a bottle of DFH Red & White was $32, which is nearly double what it goes for at the store. I would have given the selection a 5, but two beers I asked for, they were out of. Also, be sure to check out the chalk board across from the bar for the most up to date tap listings. May differ from the paper menu.

Highly recommend this to people from delaware or in wilmington on business. As far as beer bars go, I'd say this is the best selection I've seen so far.

Chelsea Tavern in Wilmington, DE
Place rating: 3.94 out of 5 with 10 ratings