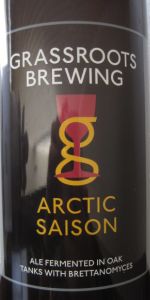 Notes: This ale embodies the spirit of perpetual creative collaboration in conjunction with disciplined brewing endeavor.

We trekked to Alaska and helped craft this rustic Saison, bringing with us the essence and imagination of our Vermont Farmstead family.

I'm not much for reviews, but this is impressive! An awesome example of what Brett can do for a Saison.

Main reason I wanted to review this beer was to heed caution to fellow BAs...
If you have a Batch #3 bottle, do yourself a favor and put at least a year on it- you will be rewarded.

Pored from a corked and caged 750 ml dated March 2014 into Hill Farmstead stemware at Armsby Abbey in Worcester, MA. Pours that murky hazy pale sunset fog that makes me salivate... The aroma quickly reveals the funky characteristics I so crave. The taste delivers. Funkier, fruitier, and more delicious with each sip. Refreshing and satisfying. A must enjoyable bottle and glass to linger over. Orange and pineapple, maybe a little past ripe, dominate the finish. Velvety smooth but undefined mouthfeel. This beer makes the day better.

Second Siason I've ever had. first was something from Blue Moon and it was quite well for a starter. So this is the real first not connected to a BMC.

L: When I uncorked it, smoke billowed in wisps. Pale, pale, pale yellow and merky! It looks like a really light hefe. Poured into Sam Adams pint glass and got a solid two fingers worth of head. Head is very spongy )thicker than a lace) Glass stays sudsy as you drink, and a nice thin layer of head.

S: When first poured, it smells very vermouth-ish, closer to champagne. It wasn't bad, it smells sophisticated. Its not a normal beer smell if you've never tried. But you can smellhints of yeast and light hops. After my second glass it smells close to a Chardonnay. Whick is honestly great as its one of my favorite styles of wine, and it too smells rather vermouth like.

T: What I am growing to like about Siason is two things in particular. First, this is what I noticed on this bottle. If IPA's and Pale Ales are to shine in hop, and Stouts truly shine in malted and roasted barley, Siasons shine in yeast. Which I never knew is what I wanted. I didn't really think the taste could be attributed to yeast. I had always heard about the Belgium wild yeasts, but I had no idea they could have such a fruity impact on the taste. Secondly with a Siason, I realize that the taste of every sip is like sticking your hand into a Crown Royal bag of Skittles in the dark to pull out three and put them into your mouth. Every sip is not the same, but you get a lot of the same notes in different waves with new combos. That is why it's now one of my new sought after styles. With this, I do get a lot of that grape taste that I smell. But I do get that intoxicating taste of fresh baked bread with a brittle and chewy crust. I'm curious what hops was used that was so delicate but so popping to taste like grape and white peach. Barley. I can't tell whatit is, but it is subtle and sweet. The taste does tend to linger for a while front to back. and it still tastes good. There is that slight enjoyable bitter taste, like chewing on the white leather that holds the sweet pulp of a ruby red grapefruite, but really really muted.

F: To me it has that "perfect" beer feel. There's that thing I imagine when I think "man I want a nice wonderful beer" and I think I want it sudsy, nice and frothy, and a slightly thicker than water feel across my tongue. I wish I could find an IPA that had the feel like this. It feels....right! I'm glad I live in a state that I can enjoy beers like this. I know it is brewed in Vermont, but it was brought together with Anchorage Brewing Company, and Alaska has some amazing beers just like this.

O: Slowly Siason is coming up as one of my favorite styles next to Porter, IPA, and Wheat. Every sip is a gamble, always feel like you are tasting the wonderful yeasts that make the magic happen because godisgood. I'm not saying this is a perfect beer, but each individual thing I'm analyzing is damn near perfect to make me happy! SO GLAD I took a gamble on this. For some reason Siason is kind of hard to find.

L: Poured from a bottle to a pint glass. Had a bright yellow color and a cloudy consistency. There was a big, foamy / rocky head that lasted a long time. Excellent lacing.

T: Tasted of a hint of the floral quality (very ephemeral), a lot of the saison barnyard funk (hay, especially), some spices (pepper), light malt, and a bit of citrus (lemon, in particular). One of the more vibrant saison flavors you'll find. Light and somewhat sweet, this one is quite focused and tasty.

F: A highly carbonated beer with a dry, smooth finish. Light- to medium-bodied.

O - like the sankt Hans, huge difference in flavor as the beer warms up. Sourness may be a little too weak after 30. Consuming no were than 50 is probably what I would suggest going forward (45-50)

O-Could have been more on the sour side. However a sweet, citrusy saison that hit the spot.

Poured from a bomber into a MoB teku glass and shared with friends.
Thanks to tbadiuk for the bottle!

Pours hazy and a light golden color with a 1-2 fingers of white fluffy head, falling to a thin color. The nose is soft and complex with lots of floral notes, lemon citrus and hints for farmy Brett. On the palate, this beer really opened up as it warmed; it featured again lots of floral and spice notes, lemon peel, white pepper, some nice Belgian yeast flavors and more and more Brett as it warmed. The body was smooth with a nice carbonation keeping it light and refreshing. A really nice version of the style, complex and enticing.

A nice sweet mango citrus balances the brett. No funk, strictly upbeat, bright and clean. The oak is present but restrained.

Brett now dominates. Peppery. Peculiar herbal grassy bitter with a touch of zinc. No more dry than a twang. Shy of medium bodied mouthfeel doesn't feel appropriate. Lacks must. The final fading flavor is of the oak.
my expectations were exceedingly high
I hoped this would be to the level of Seizoen Bretta
let alone Oak Aged Seizoen Bretta
unfair of me I realize
cheers
jd

Bottle I brought to share on the beer bus to San Diego.

Pours a hazy yellow-orange with a foamy beige head that settles to a partial film on top of the beer. Small streaks of lace form around the glass on the drink down. Smell is of malt, grain, earth, yeast, and Brett aromas. Taste is much the same with Brett and yeast flavors on the finish. There is a mild amount of Brett bitterness on the palate with each sip. This beer has a lower level of carbonation with a slightly crisp mouthfeel. Overall, this is a good beer that showcases a solid earthy Brett presence in the aroma and flavor.