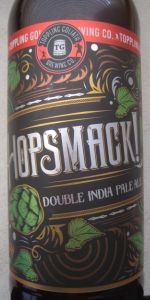 Notes: First in the series, HOPSMACK! inspired us to launch the TG Hop Patrol Series “palate rescue mission”. Giant aromas of pineapple and tropical fruit jump from this enticingly complex double IPA. True to its name, this brew delivers a heavy smack of dry hops and a double dose of bitterness in the finish.

Don't care for these tropical-hazy beers. And when I buy a Double IPA it had better be north of 8%! I paid $18.99 for a 4-pack and was extremely disappointed. A very tame stomachache-in-a-can kind of beer. I know the hazy thing is quite popular right now, but if you're going to have a pricetag like that, you better deliver more than 7.8% ABV. I can get Short's Huma Lupa $10 a six pack, clocking in at 7.7% and doesn't claim to be a double--neither does Elysian Space Dust for that matter @ 8.2%.

Toppling Goliath really doesn't miss. This beer looks great, with a bit of an unfiltered look. Smell is fresh and a bit juicy, much like the middlesection of the body. The finish is a bit dryer than the rest of the beer, which is a good change of pace. Overall, a very good beer I'd drink again.

Poured from a 16 oz can. Lots of pineapple scent. Maybe some mango. Minimal lacing. Looks to be full of sediment though and has kicked my sinuses into a frenzy. So I'm surprised this isn't labeled hazy. Just enough malt to make it chewy. But with a nice, dry finish. My sinuses hate it. But it tastes great

Great DIPA! Will write more after a couple more.

This beer pours a hazy orangish yellow color. It is topped with an inch of beige head that leaves some decent lacing.

The smell is citrus. I get orange, melon, and grapefruit.

Tropical fruit and melon upfront. Citrus rushes in the middle. The finish is grapefruit and pine.

Medium bodied with a creamy mouthfeel

This beer is three months old and is still pretty damn good.

Had HOPSMACK! at The Tap, Bloomington, Indiana, twice on draft into 12-oz. snifter.

Pours cloudy but bright melon-gold, with 1-finger near-white head, which doesn't last but does leave some etched lace. Hop resin up front in the aroma, then pineapple, melon, and some of those weirder, funky tropical fruits. A little mild bite to start, then huge sweet tropical fruits over mild malt base, and a very drying, biting slightly citrus peel finish.

I scored a biker's denim vest with the word "Iowa" embroidered along the back shoulder. This inspired me to CANtact the brewery about a patch for the vest. I was granted permission (one-time use) to have a local embroiderer direct-embroider their logo onto the back! I filled out the rest of the vest with Hawkeyes, Cyclones & RAGBRAI patches as well as a few other Iowa breweries that had patches available. Now, it is time for The CANQuest (tm) to have a beer!

From the CAN: "HOPSMACK! Double India Pale Ale"; "HOPSMACK! is here to rescue your palate as giant aromas of pineapple and tropical fruit jump from this enticingly complex Double IPA. True to its name, this brew delivers a heavy smack of dry hops and a double dose of bitterness in the finish."; "Live beer, please refrigerate!"; "Brewed in Beautiful Decorah, IA".

I beCAN by Crack!ing open the vent & then I CANmenced a slow, gentle C-Line Glug into the awaiting glass. I was initially stunned by its lack of clarity, but that could be why they mentioned its being a "live beer". I then allowed it to flow fairly freely since there was no ChANce of achieving clarity. I wound up with a finger-plus of dense, foamy, rocky, eggshell-white head with very good retention. Color was a deeply-hazy to lightly-cloudy Golden-Amber (SRM = > 5, < 7). Nose was highly tropical, very fruity, but tempered by a pine minty coolness that really set my hophead mouth to watering. Mouthfeel was medium-to-full, not quite creamy, but on the approach. The taste evinced melon, like honeydew & CANtaloupe, at first and then slowly gave way to a more tropical fruitiness before I got HOPSMACK!ed with grapefruit & pine. They mark the hops bill as "SECRET", but it was like an amalgam of Pacific west coast, southern hemisphere & experimental hops. I would guess Cascade, Amarillo, Motueka & at least one other, but I am merely a self-avowed, self-described hophead. Finish was semi-dry to dry, but lacking the bitterness that I would have really liked in/from this style. YMMV.

Pours a cloudy yellow with brown hues. Ample white head and lacing. The appearance is quite nice, although some large bubbles cling to the sides of the glass detracting slightly from the aesthetic, and the stone fruit color is a bit murky. The aroma is the most outstanding aspect of this beer. Pungent aromas of peach and pineapple and mango can be detected from three feet away. Tastes like a mixture of peach, pear, pineapple and mango with a dry hop grassy and floral bitterness on the finish. Good body with lots of carbonation. Overall an objectively very well made beer that will appeal to hop heads craving fruit punch flavors.

The cloudy gold pour makes you think you're about to down a juicebomb, but this beer offers so much more. Are there grapefruit and tropical fruit flavors? Yes! But the long, lovely finish, is pine and resin bitterness in two successive waves. Beautifully brewed and balance, and a word to the wise: Start this beer at 50 degrees Fahrenheit, and let it warm some from there for max complexity.

16 oz can into a pint glass

Nose is more muted than expected. Dank, rindy and pithy, with distinct notes of pineapple and mango.

More piney on the palate - one of the things I love about TP brews...they straddle west coast and east coast styles. Probably the most bitter beer I’ve had from TP, resiny. Moderate malty sweetness balances mid-sip, long, bitter sweet finish.

What a bold, unique take on the style. Took my palate a few sips to adjust and be able to parse out the nuances.

Poured from a 16 ounce can into a snifter.

Overall- This is essentially a hazy West Coast IPA, but it is very tasty.