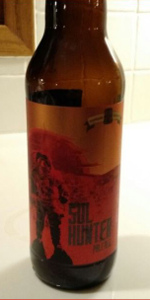 Notes: Gone are the days of experimentation and test-flights. As we voyage into the unknown, we rely on our skill and determination - guiding us safely to the promised land. Our goal is clear: pursue the sun and harvest the power extracted from an equinox. The task is large, but hopes are high as we travel once more among the stars.

Drinkable but very plain & simple; the definition of average.

Appearance: A bit of a gusher, the beer pours honey colored with a massive head; as can happen when too much foam is in the glass, the stickage and lacing are impressive

Taste: Aspirin and lemon tones dominate the front end, with the tropical fruit elements quite reserved; papaya and passion fruit intermingle with white grapefruit, through the middle; the finish is rather dry and grassy, with a faint echo of the front end in the aftertaste

Overall: Bottled in the summer, I suspect this has oxidized a bit and is not quite what it was when fresh

Thanks, TBach, for the opportunity

Classic in hop flavor but nouveau in its attempt to be a pale ale, Toppling Goliath continues to blur the line between the American pale ale and the IPA. Modest in alcohol but saturating in its hop profile, the beer's dry body makes the beer register much more like the later and wonderfully so.

As the ale opens up on the middle of the tongue, its sweetness bounces off of the tongue with beer's expressive carbonated bite. Highlighting the beer's peppery and spicy edges, its the fragrance of citrus trends into a dried peel character of orange, grapefruit and lemon. Mango and apricot bring their own dehydrated flavor in a dry tropical medley. Grassy, peppery and dryly of pine cone, the beer's resins seem tight, weathered and sharp.

Dry, crisp and clean, the bubbly nature of the ale allows the texture to pop and create a peppery refreshment that quenches the thirst effortlessly. An aftertaste of peppery greens, hay and sawdust persists long after the malts have subside.

Overall a fantastic beer! Not as good as some of the other beers produced by Toppling but none the less fantastic

Smells like pseudo Sue with a touch of wheat.

Nice piney bitterness with grapefruit and orange rind, some wheat and soft malts.

Overall it's decent. A good hopper to split with a friend while hanging out.

I like this beer. It's a great drinker, but as with my previous review the sum is greater than the parts. The aroma is nice with a nice soft fruit and a slight herbal character with no grass quality. Huge head at first covers a rather cloudy gold body. This drink great. Tasty and smooth and going down easy. Nice mix of hops and pale malt qualities with not particular sweetness. Some heft to the body considering the size of the drink. Some bitterness that lingers a good long time but isn't distasteful nor overly distracting. A satisfying drinking beer.
No dating on this bottle so I have no idea how old it is.

Pours very hazy, but not quite milkshake hazy, with a large white head.

Smells very hop-heavy and chewy, with big nodes of mango and smaller nodes of cat pee. It's a nice aroma, but it's not so nice that it couldn't be easily confused with a few hundred other beers that have come out in the last 2-3 years.

And the taste is about the same as the aroma: good, but not at all exceptional for a beer released in 2016. Big tropical fruit up front, starting sweet and growing bitter as the sip progresses, finishing with yeast and lightly sour grain.n

APA? this is definitly an ipa

looks great in the glass, completely hazy, like a glass a juice with a nice head. really love the label as well

nose is kinda mute. some hopes and wheat. slight onion

flavor is right up my alley! tons of hops full force, much brighter than the nose. has a bit of that oskar blues onion hop presence. really mixes well with the beer, would love to find out what hops went into this as it has multiple waves. delicious

feel is pretty good, nicely carbed and, medium bodied. no alch at all

this is an ipa, might as well call it an ipa. very enjoyable, lots of flavor in this one. mike you got me good!