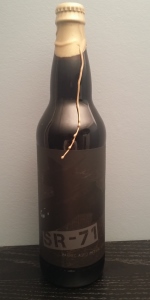 Notes: A different beer from previous draft iterations of SR-71. This beer has been confirmed to be the equivalent of Assassin (Barrel Aged Norseman’s Wrath) with more time in the barrels. The fill date mirrors the 2014 Assassin release that was aged in Pappy Van Winkle barrels and is most likely drawn from the exact same batch of base beer.
View: Beers | Place Reviews
Reviews: 73 | Ratings: 545 | Log in to view all ratings and sort

Wow! Got a bottle of the 2014 a while back and have been sitting on it for awhile. The whisky is there but well hidden. Very sweet. Velvety thick mouthfeel. Nearly perfect!

Had this when on tap at TG brewery in summer of 2018.
Small pour in a small glass.
Dark as can be.
Thick, it was making big legs in the glass.
Smell was BAM!! Deep chocolate and coffee!
The taste...oh my gosh, it was so strong I had to share it with my family it was amazing!!! A 5 oz pour was $18!! But so worth it! Epic good! Not sweet like Mornin Delight but still that powerful stout flavor, wow! This is top notch!!!

Overall eh, def not worth the hype

Incredible Russian Imperial Stout. Amazing barrel characteristics. Great body. Over all one of the best Barrel Aged Stouts I've had. I must say that I feel like Barrel Aged Dark Lord is just as good or better at a quarter of the price though...

I don't know what was up with this, but I didn't find this beer very good at all. It was slightly tart on the finish, which made me think it was going bad in some form. I didn't get much barrel character, thinner mouthfeel and compared to all the other stouts we were enjoying, probably the worst of the night which is crazy. Likely just a bad bottle, but didn't know those existed with this beer. Unfortunate, but rating is as accurate as I can be with it.

What an amazing nose that lingers well after I've stopped smelling; supremely luscious body, with the flavors lingering for a while too; the finish is boozy yet controlled, balanced, and well executed.

L: Jet black, no light escaping through.
S: Whisky and chocolate.
T: Heavy whisky and barrel presence, light chocolate and vanilla flavors.
F: Thick as they come. Perfect mouthfeel.
O: This beer didn't come close to the hype it receives. It's excellent but drinking next to a 2010 BCS Rare makes you wonder why this beer is valued so much higher.

This beer takes everything that is lovely about purple wax Assassin and amplifies it into a sludgy, brownie-batter-dipped-in-whiskey beer. Overall, the flavor profile is akin to Assassin, with bursts of fudge and dark chocolate on the palate, followed by waves of raisiny, dark fruit flavor. The barrel presence is more pronounced, with a woodier, more bourbon-forward profile, but it never delves into the trenches of the dreaded cicerone descriptor of, "too hot." The mouthfeel on this beer is virtually unrivaled by any other in the game.

SR-71 is a special beer. It is not worth 2.5x Assassin 2016, though. This is one of those beers you reach for when you want that elite craft beer experience to celebrate precious moments in time.

Pours thick and black, with a thin dark brown head that fades to a dark brown ring around the glass. The aroma is chocolate, vanilla and bourbon. The taste is chocolate, marshmallow, vanilla, lots of barrel, but not boozy. There also seems to be some smokiness on the finish. It's a little on the sweet side, but not overly sweet. The mouthfeel is thick. Overall, this beer is a work of art. Like KBBS, I was worried that it was over-hyped, but, also like KBBS, that is not the case. This beer is as close to perfect as a barrel-aged stout can be.

Format: 4 oz pour from Toppling Goliath taproom.
L: Dark black, thick motor oil. Very little to no head.
S: Boozy bourbon, oak barrel and molasses.
T: Cold - Very bourbon forward. Could not taste much else.
Warmed up - Flavors really start to open up. Bourbon, molasses, oak, chocolate syrup.
F: Thick and syrupy.
O: Excellent barrel aged imperial stout. Well worth the price I paid for the 4 oz pour, and I am thankful I had the opportunity to try it.

B2 from the bottle, at about 65 degrees.

L: Jet black. Dark, mocha head. Pours from bottle like motor oil. The beer leaves a dark brown tint and alcohol legs on parts of the glass it touches.

S: As it pours, smells of marshmallow, chocolate complimented with a little barrel smell. Nothing overpowering. Incredible.

T: Huge, huge marshmallow and fudge flavors. There's barrel, but again, not overpowering. Absolutely fantastic. Near impossible to believe this has no adjuncts.

What is funny about my SR-71 experience is - while I missed the release of 2018, I was able to enjoy the OG bottle the very same day.

While cool/cold, SR-71 is tasting a bit oxidized. The barrels and quite a bit of chocolate are still present, but the beer tastes a bit dull and stale. As the beer warms, the chocolate turns to fudge, and that oxidization fades quickly. SR-71 is extremely barrel forward, yet still exhibits loads of chocolate and fudge in the nose and taste. It's a delicious beer, and I rate it highly - I think my one experience with it will have to suffice. Given secondary values, I'm fairly sure that I'll never see it again - and that's okay. This one experience has been quite memorable enough.

Drank on 6/11/2018. 11oz pour. Silver wax bottle. This was set out for 25 minutes before drinking while the pour took roughly an hour to consume.

Look-motor oil thick just like the other TGs. Tons of lacing, especially as more gets drank. Remains continue to coat the sides of the glass. Tiny mocha colored head

Taste-follows the nose quite a bit. Tons of barrel and bitter dark chocolate. Really and incredible depth of flavor. Even some toasted caramel, like the top of a crepe brûlée and a hint of tart chocolate covered cherry as it really fully warmed.

Feel-incredible. The finish is just amazing as these flavors linger around in the best of ways. As much as there is some booze on the nose, there’s no heat whatsoever. Extremely smooth and easy to drink.

Overall-definitely lives up to the hype. Probably the only time I’ll get a pour like this one again. Absolutely fantastic.

2015: 4.9 Best stout I've ever had. Luscious, thick, crazy nose. Like smelling flavors of a good whisky....some heat, then fudge, then caramel, then vanilla. Amazing beer. Aftertaste is of honey and coats your tongue. Certainly sweet but great flavors where the barrel cuts the sweetness of the base stouts. Had side by side with Assassin 14 one time; Killed it. and way better then 2018 SR. I think this beer was a happy accident that they will never recreate.

2018: 4.14 Different beer. Still thick, still fuggy, weird metallic after taste. Doesn't have the same nose, more of a thick super sweet stout. The fudginess and mouthfeel are the redeeming qualities, but a different beer than 2015. Good stout, but not worth the price and wouldn't even compare to Batch 1.

At the Toppling Goliath new brewery opening. Got a pretty large pour. Dark chocolate, fudge, and bourbon. Overall an amazing beer that I was very fortunate to be able to have.

Prior to tasting, I wanted to hate it. I wanted to love it.
It looks perfects, smells nice, nice mouthfeel, and tastes delicious. It may be the bar for a barrel-aged stout. Perfection. Its hard to describe. I'm not wowed, but at the same time its subtle, rounded, and wonderful. I'm going to side by side w 2016 BCBS in a minute.
...back. My hunch was BCBS was a similar beer from memory. Its not. SR-71 crushes it.

Side by side at a killer whalez share, this was incredible.... can't rank anything equal to Bake Kujira but this is definitely in the top beers I've ever had. Huuuuuuuge body - thicker than any body with no adjuncts that I've ever come across, barrel so well integrated into the chocolate-forward base. It's the best non-adjunct stout you will ever come across and was a completely different monster from that of a fresh 2016 Assassin, we had right before this one.

Had this at the Tasting to Sink all Sea Shepherds, at Moeder Lambic cellar, side by side with KBBS '14, MD #2 and yellow wax Assassin
A: Looks exactly like Assassin, pitch black, very thick and sticky, with a decent retention.
S: Smell is very similar to Assassin, focused on vanilla and chocolate, with notes of marzipan and dried fruits. At the beginning, I had a hard time differenciating both beers, but as it warmed, it became a little bit boozier, the barrel ageing emphasizing the alcohol content.
T: Taste is also very similar, on vanilla, marzipan, chocolate and fudge, but a little less mellowed and with more alcohol and more bitterness on the finish. Also very sweet.
M: Thick, almost syrupy. A little bit smoother on the palate than Assassin, but the alcohol kick makes it a little bit less enjoyable than Assassin.
O: Very similar to Assassin but a little bit less well integrated which prevents this to being great. Probably my least favorite of the TG stouts, still a very good brew.

Very similar to Assassin but somehow better. So does this make this beer a 5+? Might need to adjust your rating scale BA to make Ron for a beer this good. Best nonmaple BA bet I have ever had.

Brownie, vanilla, marshmallow, roast, and barrel treatment in perfect balance. Viscous but not mucous. This has to be the perfect iteration of this style.

This hits all the right notes. Super thick stout. Sweet, but not crazy sweet. Toppling Goliath has done it again. This is nearly perfect in all aspects. I wish this was widely available.

I normally don't rate anything all 5s, but this is hands down the best BA Imperial Stout that I've ever had, adjuncts or no, and side by side with KBBS it blew it out of the water. This beer is phenomenal.

So we settled in the middle and gave it a 4.9. I just hope you don't spend all night with this beer only to ruin Coach Kilmer's perfect season the next day. SR-71 may have been the back up plan to Assassin, but it doesn't want your life.