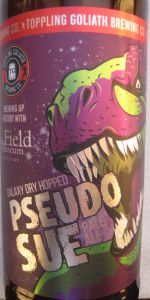 Reviewed by stuffandthings from California

4.31/5  rDev -0.7%
look: 3.5 | smell: 4.25 | taste: 4.5 | feel: 4.25 | overall: 4.25
I scored a biker's denim vest with the word "Iowa" embroidered along the back shoulder. This inspired me to CANtact the brewery about a patch for the vest. I was granted permission (one-time use) to have a local embroiderer direct-embroider their logo onto the back! I filled out the rest of the vest with Hawkeyes, Cyclones & RAGBRAI patches as well as a few other Iowa breweries that had patches available. Now, it is time for The CANQuest (tm) to have a beer!

From the CAN: "Galaxy Dry Hop Pseudo Sue Pale Ale"; "Brewing Up History with Field Museum."; "Forged from the raw elements of the universe, this beer’s hoppy flavor comes from the celestial alignment of both Galaxy and Citra hops. Galaxy Dry Hopped Pseudo Sue dwarfs all other Pale Ales."; "Live beer, please refrigerate!"; "Brewed in Beautiful Decorah, IA".

I beCAN be Crack!ing open the vent & then I CANmenced a slow, gentle C-Line Glug into the awaiting glass. I was initially stunned by its lack of clarity, but that could be why they mentioned its being a "live beer". I then allowed it to flow fairly freely since there was no ChANce of achieving clarity. I wound up with just under two fingers of dense, foamy, pillowy, bone-white head with very good retention. Color was a deeply-cloudy, almost murky Golden-Amber (SRM = > 5, < 7). Nose was redolent with grapefruit with a bit of orange/CANgerine mixed in. Mmm. Mouthfeel was big, full & creamy, like a dollop had been scooped into my mouth & onto my tongue. I let it roll around there to really get the full juiciness of its flavor. The taste retained the citrusiness of the nose while adding pineapple, pine and an earthy green pepperiness to the equation. I found the totality of it to be just my sort of thing. It was plenty bitter without being astringent. Finish was dry without being gasping. I was very glad to have gotten their distro here in south-central PA & look forward to reviewing more beers from them as a result. YMMV.

Rated by Bloodbuzz99 from Georgia

Reviewed by trevormajor from Ohio

Reviewed by gooddaydiablo from Texas

overall: such a nice one at 6.2% the flavor is very intense, cheers!

Pours an opaque, pale orangish yellow with about one finger of white head. Decent retention and lacing.

Smells of blueberries and citrus.

Tastes mainly of citrus-orange and grapefruit. Also picking up some of the berry notes from the smell. Hop bitterness on the backend of the sip.

Overall...not as good as the original, but pretty darn good.

Reviewed by DvdP from Netherlands

Reviewed by RJBT from California

Smell - Heavy pine on the nose with some citrus qualities.

Taste - Not as citrusy as the nose. Lots of pine and guava. Bitter finish from the Galaxy hops with a slight hint of metal. Not my favorite.

Overall this is a great IPA but it is not the same powerhouse that I think the OG Pseudo is. With the introduced Galaxy hops this beer takes on an added layer of depth that detracts from the fruit flavors of the OG and adds an unwanted bitter finish. Will drink again but I’d rather reach for the OG Pseudo.

4.29/5  rDev -1.2%
look: 4.5 | smell: 4.25 | taste: 4.25 | feel: 4.5 | overall: 4.25
Pours a hazy pale yellow from the can, thick foamy head that recedes leaving big patchy islands on the surface, solid retention. Nose is bright galaxy hops, juicy but resinous. Flavor is balanced between juice and resin, with a moderately bitter finish; underlying notes of grain and tropical fruit emerge as it warms, with nice piney notes mixing in as well. Finish is dry with a full mouthfeel that nevertheless maintains some crispness.
Nov 08, 2020
Rated: 4.25 by JonB25 from Delaware