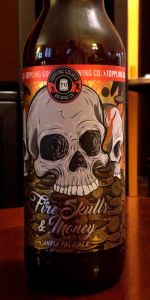 Notes: Inspired by a trip to the west coast, designed to capture the wild spirit of adventure and brewed to be enjoyed with friends. This rich IPA is for those with wanderlust in their heart and fire in their eyes. Join our Citra, Mosaic, Galaxy, and Nelson hops on a journey to the bottom of your glass.
View: Beers | Place Reviews
Reviews: 124 | Ratings: 530 | Log in to view all ratings and sort
Reviews by RollDamnTide:

While not quite sex, drugs or rock-n-roll, the brewers at Toppling Goliath get out of their comfort zone in order to find themselves. Pulling together the holy trinity of hops, Citra, Mosaic and Galaxy, the brewery also uses the tangy and slightly winey character of Nelson Sauvin hops for a legendary palate trip.

Pale gold and nearly turbid with haze, the ale looks the part of grapefruit juice while the nose picks up on the same fruity aspirations. Fire Skulls & Money continues the aromatic gauntlet with a rounded and bright bouquet of citrus, tropical and vinous fruit. Sweetened with honey, shortbread and fructose impressions, the malt character is moderate and supportive of the brunt of hops to come.

As its malt sweetness begins to dissolve on the tongue, the hops brighten into a radiant and branch ripe juiciness of pink grapefruit, tangerine, lemon and lime before a more tropical medley brings the succulence of pineapple, mango, passionfruit and kiwi to the middle palate. Trailing with a botanical blend of fresh grass clippings, chive, hemp and herb, the wine-like complement offers a spicy and sprucy bitterness that governs the beer's late palate.

Medium bodied and finishing crisp and dry, the beer seems to have a fuller impression because of the rich fruit character that the hops portray. But the weave of bitter resins, alcohol and hop spice dries the taste beautifully with an aftertaste of lemon verbena, sassafras and a catty bitterness that's long and lean.

A-Bottled on 4/6. Poured into a chalice. A foamy white head breaks down to suds atop a very hazy pulpy looking orange/yellow colored brew.
S-Reminds me of a TG hoppy beer I get lots of citra and mosaic. Aromas of mango, grapefruit, wet grass, passionfruit atop a clean malty aroma.
T-A big punch of the aforementioned hops carried beautifully by a sturdy malt backbone. Finishes with some grassy, oily flavor and bitterness.
M-moderate carbonation, big bodied, no burn, nice finish with just enough bitterness.
O-A behemoth of flavors with a malt bill that can hold up to the aromatic and bittering hops. This is fantastic.

Finally getting around to this IPA from TG... I've had most of their widely-available stuff, but haven't yet had Supa Sumo or Scorpius Morchella for some reason. Even though PseudoSue is a real classic, I have to hand it to MoZee; it's the best IPA from a brewery that, so far, seems unable to do any wrong by me. Will this continue that trend?

Pours a completely-turbid yellow-orange color with a dense, meringue-like head of whipped-looking foam that seems to stick around inconsistently... half of my glass is drenched in leggy suds, and the other half is almost barren. Interesting. Overall quite good though. Lace seems moderate but not overly consistent. The color and opacity on this are nothing to shake a stick at, that's for sure!

The nose is just completely oily and dank with a side of grassiness and light chive-like earthy undertones that round everything out. The hop combo here is twice what's in MoZee (this features Citra and Galaxy in addition to the Mosaic and Nelson in the aforementioned ale), but it seems that most of the Citra notes are a bit lost. Sure, it's tropical, but I can definitely get that element from Galaxy and Mosaic in combination, too. Sure enough, it's mostly passion fruit and guava here: hallmarks of Galaxy. That's kind of splitting hairs, of course, but I'm not sure about the necessity of all these big-players in the hop world coming out to bat in this one. It's less juicy than MoZee and PseudoSue, I think.

Wonderful flavor, though... chewy oat-like malt backbone combining with flavors of guava, pineapple and passion fruit with some pulpy citrus flesh as well. Grapefruit, tangerine and even some stone fruit like apricot are on display here fairly prominently. Some chive and spiciness with rough-hewn earthy flavors and a tempered grassiness. More pulp and orange juice with a decidedly bitter, dank kick in the finish. This has an utterly saturated hop character... it's just dripping with oily goodness.

The feel is heavier bodied than I expected, honestly. I for some reason thought this beer was in the 8-9% realm, and, since TG doesn't print ABV on their cans (guys, fix this...), I kinda went in to this one expecting a doozy. Perhaps that's coloring my review, but even after learning it was sub-7%, it still feels like a bigger beer. It doesn't have much alcohol to it, but the hop burn is pretty intense and kind of hurts the experience. Carbonation is fairly low and the finish has a lot going on. Luckily, it doesn't feel muted, but the lack of definition doesn't make it an easy drinker. Just a little criticism from a random beer reviewer. That said, I'd still grab this again, for sure!

Appearance: Turbid, murky orange juice with pulp appearance. Not much of a head to speak of.

Overall: Another great beer from TG! Even with this one being 2 months old, it is still tasting fresh. All danknes and hops with a slightly sweet finish. I'd definitely crush this one again.

Poured from a 22 oz. Bottle into an IPA glass.

Smell: A very juicy and dank hop driven aroma with a scent of tropical fruit and pine. Big scent of citrus with some orange peel, grapefruit, mango, melon, apricot, papaya, and lemon with some pineapple. Dank scent of pine resin, cannabis, and grass. Malt hints of caramel, grains, and cracker with yeast. A really good juicy aroma.

Taste: Like it smells, a juicy and earthy hop dominated taste with notes of tropical fruit and pine. Upfront ripe and juicy hop notes of orange peel, grapefruit, mango, melon, papaya, lemon, and apricot along with some pineapple. Earthy hop notes of pine resin and grass. Background malt notes of caramel, cracker, and grains along with yeast. A very good taste.


Mouthfeel: Medium bodied with a moderate amount of carbonation. Very juicy and oily with a drying finish.


Overall: Another great IPA from Toppling Goliath. Big juicy and dank hops with a moderate body.

Another big thanks goes to Joe for this one.

Fire Skulls and Money. It pours like muddy water at the end of a trail. A solid yellow yeasty muck with drops of orange and brown, and a frothy white head that clings like dripping paint on the side of the glass. It's ugly, but somehow, I'm really diggin it this time.

Vanilla wafers and mango. Straight up. But wait...here comes the parade of fresh squeezed oranges, papaya, and even a little pineapple. A bright green fresh pine has an auto around those tropical fruits, and brings them together masterfully.

A more subdued vanilla wafer showcases itself in the flavor. A bit more like plain Greek yogurt. Fruit at the bottom. Then stirred. Mango being the dominant juice, but a foray of others come through, and ultimately are finished with that ever pleasing pine.

Soft and creamy, smooth and decadent. Not normally words I like for an IPA, but this works. It's sweet juiciness is brought to balance with a good bite of sharp bitterness, but just to balanced.

Of course I like my IPA's bitter as hell. But this works. I'd like it even more if it went that way, but this is one hell of an IPA regardless of style preference. Toppling Goliath does it right once again.

Cheers, and thanks again Joe!

Pretty close to DDH Ghost in the Machine by Parish Brewing

Love this New England IPA from Toppling Goliath. Pours a hazy orange. Loads of tropical fruit come through: mango, pineapple citrus. Bursting with flavor and there’s a citrus, yet sweet aftertaste with mimal bitterness. This beer is easily in my top 10 IPAs.

650ml bottle. Served in a Toppling Goliath snifter glass. Pours a medium orange, slightly hazy body, one finger white head, good retention, bits of lacing and appropriate medium collar. Smell is citrus and grapefruit pith with a bit of pine resin in there. Slightly floral, perhaps. Minimal caramel sweetness shows up in the nose. Flavour is similarly hoppy with citrus, light resinous pine bitterness, floral notes, grapefruit, touch of caramel and a slight pine finish. There is a distinct Mosaic flavour behind this, with that tapioca like sweetness to it. Mouthfeel is medium bodied, soft and smooth, good carbonation with a mild spice and pine finish to it. A nice interesting blend of hops; it works together fairly well to create a darn tasty IPA that is in the vein of the big hitters from Toppling Goliath.

Turbid opaque orange tan color with a nose bursting with tropical fruit. Flavor is tropical fruit, melon, pineapple, some tangerine, and spicy fruit rind. Thick, chewy, and very dry on the back of the tongue.