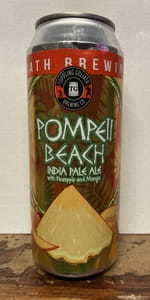 Brilliant orange color, very hazy, minimal white head. The nose is a straight up mango/pineapple fruit cup, with maybe a pretense of the Mosaic hop deep in the background.

The taste removes any pretense at hop flavor immediately - this is all pineapple and mango fruit cup. It may make a nice beach beer, but it in no way resembles the base beer or an IPA - it’s all fruit.

The mouthfeel is nicely medium, to the style. TG is a favorite brewery of mine, and I’m glad I could give this a try, but I wouldn’t seek this out again.

Murky dark gold to copper in color. There’s a fingernail of off white around three quarters of the rim and a fifth of the top. The aroma is of mango and pineapple. I’m tasting fruit cocktail with pineapple and mango. It’s a bit too sweet if you ask me. The mouth is moderately carbonated and refreshing.

Pineapple juice infused doesn't work. The worst I've ever had from Toppling Goliath.

Aroma: The aroma is tropical fruits

Flavor: the taste is very sweet with a lot of pineapple, some mango, and a hint of citrus/orange. Unfortunately I don't think it works. It is too sweet and too much pineapple. It taste like pineapple juice with a table spoon of vodka.

On tasting, pineapple is the strongest flavor, then the citrus mellows out into mixed fruit. Somehow, the mix isn't pleasing to this usually fruit friendly palate. It's also a little sour and bitter at the end, even a little drying.

Mouth is full and fruity. Finish very sweet, but then that sour bitter tail.

Overall, a rare miss for TG. The fruit aspect seems a bit off, as was the finish.

God damn this is fruity and sweet. If I didn’t know better I would guess this is a fruit punch pineapple Tropicana spiked with vodka, not a beer. Or maybe a melted vodka popsicle left over from a frat party. Looks almost exactly like orange juice. Smells like fruit cocktail. It isn’t very good, but I surmise a college aged girl who doesn’t like beer would like this.

Pours opaque, pulpy orange juice with no lacing but some fruit clings to the side. Lots of tropical fruits on the nose. Tastes and has a body of a mango pineapple smoothie. Really nice enjoyable beer.

I can smell this already as it forms a foggy and slightly murky medium blonde in the snifter; the head is 2 fingers and recedes rapidly leaving speckles of lace behind. I have a feeling the fruit is killing the head retention and the otherwise signature TG world-class lacing.

As said, I could smell the beer already at arms' length away. I actually get some of that Tiki Slam (Boulevard) vibe, which I dig - passion fruit, mango, pineapple, pink guava...I'm not sure what they used, I'll reach for the can later. It's very tropical, but also very un-IPA...ish. I'm torn. I like this aroma, but also there's no hops here. I have to be fair and square - it doesn't quite reach a 4.

Ok. This is the worst Toppling Goliath beer I've ever tasted, by a MILE. It's like sangria left to rot in the Florida sun mixed with mushy mango and fermented prison wine. Sickly cloying too. There's a stab of Columbus hops or a similar harsh boil hop in there, and some weird edible orchid flavor. It's a train wreck.

Feel is acidic like a sour, has plenty of boozy alcohol, and buzzes with carbonation. Leaves some starchiness on the palate.

Overall, man, this was rough. If this is where Toppling Goliath is headed, get me off this train. I saw the ho-hum ratings and wasn't sure what to expect. I didn't think I'd hate it this much. . Closer to pruno and a bad berliner weiss than an IPA. Honestly, either they’re releasing too many beers without beta testing them or TG's days have come and gone. It'll be hard to shake the victorious beers of lore by them, but I'm gradually pulling away in my confidence towards them as their beers are just money pits now.

Pompeii was nowhere to be found in this beer, and I think that "tagging" that name was the only way to sell it. Don't fall for it.

This doesn’t taste anything like Pompeii. Too sweet, not enough ipa. It’s all mango and pineapple. Orange and tangerine. Tropical fruit sweetness. Good in small amounts.

Refreshing, but hardly an IPA! This one is like a radler, but the juice is very forward, and the beer fades into the background. Mouthfeel has a funny boozy harsh and fake edge - very syrupy. Flavor is fruit forward and seems artificial. I actually decided to put ice in this, and it improved the drinking experience by muting the sweetness and syrupiness. Ok, but this one should go into TG’s flavor graveyard.

Pours a hazy orange color with a fizzy white head that quickly disappears.
Huge tropical fruit aroma. Pineapple mango citrus.
This is a very sweet beer cocktail. It is tasty but does not taste like an IPA. Tropical fruit juice with a beery backbone.
Medium thick mouthfeel with no carbonation.
Overall this is not really my thing. I think i might have liked this better over ice like a cocktail. If an IPA with fruit juice sounds good to you then definitely try this.

16oz can dated 06/16/21 poured into a stepped pint glass shows an opaque orange body with plenty of suspended particulate. A brief head of white foam forms with a slightly aggressive pour but evaporates.

Aroma seems muddled, but there is a lot going on in there. Mango, peach, pineapple, and rubberband all combine to form a generic fruit cocktail.

Flavors are much more distinct driven by mango and peach and finishes with pineapple acidity.

Overall maybe great with rum and fresh fruit. I will never know.

Pours a hazed & effervescent amber with a finger of cream colored head. Slightly below average head retention & above average lacing

S: Plenty of the advertised fruit, fades a touch as it warms

T: Follows the nose, sweetness & just a little acidity & dryness up front. A little dryness mixes in with the mango & pineapple. Finishes with a little pineapple acidity, dryness & plenty of tropical punch sweetness

Soo drinkable, some may find it too sweet, but this is how I like my Tropical IPAs, don't need to be hinting for the flavors. This is a must repurchase, since it is only 3 weeks old