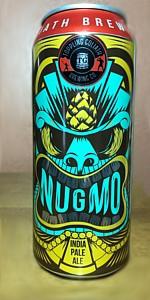 Notes: Mosaic, Sabro, Simco, and Amarillo hops join forces to create a bouquet of tropical citrus and pineapple aromas. This bold, hop-forward IPA captivates the senses as you raise a glass in tribute to lord NugMo. May he bless your taste buds with a bounty of flavor.
View: Beers | Place Reviews
Reviews: 27 | Ratings: 96 | Log in to view all ratings and sort
Reviews by RaulMondesi:

Well, no ones perfect. I mean, I bet Miranda Kerr has even let one rip in front of her billionaire husband a few times on accident (don’t worry, Miranda, I’ll always love you, baby). And right here in Nugmo, we got a super model that let out a butt bomb. Like, yeah, it’s kind of like, “Who cares?” Nugmo is ok and stuff, but for Raul, it’s the first time he has had just an ‘aite’ beer from the Kings and Queens over at dat Toppling Goliath joint.

The Raul man was a bit hesitant at first (even though it’s a TG beer), cuz he ain’t into that Sabro hop. But hotdogit, if someone is going to make something good out of something Raul ain’t really into, it’s dem playaz over in Iowa. So yeah, it’s ok. Definitely not feelin’ it like William Powell, Myrna Loy and Asta, solving a murder mystery, but it will do the trick.

My goodness this was incredible. I had high standards for the great TG and this one wasn't even as highly ranked as the others I've tried (Pseudo Sue, King Sue, Sosus, Mornin' Latte) but this beer just blew me away. "Best by 7/25/20" printed on can. Pours a surprisingly hazy yellow color with lots of fluffy white head and beautiful small rings of lingering lacing that persisted. Much hazier than I was expecting from a non-NE style IPA. Big fragrant aromas of ripe tropical fruit, pineapple, mango, papaya, orange, guava and passion fruit. Maybe a little melon and lemon. Also malt, creamy vanilla, weaker floral hops. Taste follows the nose, excellent balance and depth, great juicy flavors and couldn't feel or detect the ABV at all. Smooth, luscious mouthfeel, a little sticky, but so soft and reminded me of a Tree House NE style IPA. Great carbonation. Oh man I would love to just keep drinking this all day. An outstanding IPA, definitely my favorite so far (if it's truly considered a regular American IPA).

Creamy yellow in color with an opaque appearance. Poured with a moderate creamy white foam with good retention. Fruity aromas with notes of tropical pineapple. Medium bodied with medium light carbonation. Silky, creamy smooth feel with pleasant warmth from the middle through the finish. Fruity and mellow tropical flavors, melon, pineapple and papaya. Medium light bitterness that slowly expands through the finish. Finished with light booziness and bitterness along with soft tropical fruity flavors. Great aromas, feel and flavors. Fantastic.

Another hazy ipa from TG, and this one doesn’t disappoint. Mosaic, Sabro, Simcoe, and Amarillo...yum. Haze is luminous and golden not murky green. Head has good retention. Smell is delightfully tropical with dank and allium highlights. Mouthfeel has a good bite to it, glad it’s not like some flying NEIPAs. This one is really good!

Pretty standard juicy IPA pour with an opaque golden body, large head, and decent lacing. The smell was tangerine, passionfruit, and melon. The taste contained the same tropical flavors as the smell. The bitterness was quite low. The finish was tangy and juicy. The aftertaste was not very long lived. The feel was medium dense and soft. Nice NEIPA.

This is an interesting one. Very cloudy, weak orange juice like appearance, mild head and lacing. Smell when I opened it was a huge juicy and dank slap upside the head. It tapers off, but it’s got good citrus notes of orange, pineapple, and mango. Taste is the same-initial sips are big, bold, juicy and dank with slight bitterness on the back end. It seems like a New England style with a bit of a West Coast ancestry. But then it softens into more of a mild juice bomb with a humble tang on the back end. It’s got a big body, very mouth filling and mouth watering, some booziness. It’s a pretty damn good beer, very enjoyable, and worth the buzz.

A: The beer is very hazy to cloudy yellow in color with a slight hint of amber hues. It poured with a quarter finger high frothy white head that left a wide collar around the edge of the glass that gradually narrowed down.
S: Moderate aromas of mangos and pineapples are present in the nose.
T: The taste has flavors of pineapples, lime, mangos and stone fruit and finishes with notes of pine. There is a light to moderate amount of bitterness.
M: It feels medium-bodied and a bit "chewy" and juicy on the palate with a moderate amount of carbonation.
O: The smell and taste of this IPA really have a lot of complex aromas and flavors given all of the different hops that were used.

Picked-up a four-pack of cans at Bradford's in Plymouth for about seventeen dollars. My eighteenth brew from these guys. Very solid brew, a tier below King Sue etc., needs to be @ a lower price point.

Do these guys ever make a bad beer ? Another outstanding offering to say the least. Smells like citrus friut and pineapple up front. The taste follows the nose for sure.Love these guys at Toppling Goliath !