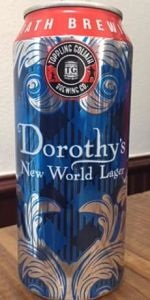 Notes: Our flagship beer was named after our founder’s grandmother and crafted to please her purely classic tastes. Mildly hopped, light in color and body, and clean to the taste, this california common-style lager drinks easy. Each sip charms the senses with distinct flavor and refreshing simplicity, delivering a smooth finish. Dorothy is truly the “Classic Beauty.”

From a growler purchased about 50 hours ago filled at Casonova's in Hudson....still perfectly carbonated..

S-Hay...grains....not real assertive on the nose..

T-Loaded with flavor....very bready and sweet with some light lemony citrus notes....does not remind me of a California Common at all but more like a Kellerbier...I can't keep this in my glass it is so tasty...

O-One of my favorite easy drinking beers of all-time. A keg of this at a summer pool party would be perfect. I could drink this every day for the rest of my life. I really, really like this one.

Hello everyone! Poured out of a 16 oz. can, this beer is superb.

Appearance - Pours a soapy one-finger head. It has a straw-yellow color, similar to Budweiser. By the looks of it, there doesn't seem to be an immense amount of carbonation. Looks like your average, ordinary beer.

Smell - Right off the the bat, I smell a lot of graininess. It has a good smell of breadiness. I think it smells malty, too. I don't really smell any hops.

Taste (most important) - I definitely taste good hops. The hops are NOT overpowering at all. It kind of reminds me of Budweiser, but without the overwhelming adjuncty sweetness of Budweiser, and it has more of a hoppy taste. It is like a crisp, cleaner version of Budweiser. I think it's worth mentioning that it has a 5.5% ABV, which I think is a good achievement.

Mouthfeel - Not overly carbonated and spritzy. It has a little heft to it, but not too much.

Overall - If you want a beer, this is what a beer should taste like. Overall, this is a great overall beer! I think this is my new favorite beer.

Aroma of sweet malt and floral hops with a touch of light citrus.

Flavor on entry is rich, slightly sweet malt followed by clean floral hops with a hint of rounded, not sharp, citrus. These simple flavors work in harmony and remain consistent into the aftertaste.

A rather nice change of pace from IPAs and other strongly flavored craft styles. I gave out tasting samples to a couple of grad students who proclaimed it better than PBR. Theirs is a limited perspective, certainly, but an honest one.

12 oz. bottle from a trade. Decent sessionable lager. Golden color. Large amount of head and tons of carbonation. Taste is very plain jane so it's not for the hop forward type of beer consumer but that is what this style is. Overall it's clean, crisp and refreshing. Mouth feel is standard light body lager feeling. I will not drink this again but am glad to have checked it off the list.

16oz Can from Good Spirits Co. Wine & Beer, Glasgow (£3.40):
A nice first beer from the brewery for me & one that's best feature was the excellent balance to it, although it was more sweet than I'd anticipated going in; especially as I had been expecting a straight-up pale lager when I picked this one up. It was quite a crisp & fresh offering with a lively feel that had some nice honey & butterscotch flavours sitting on top of a standard lager base; easy going & enjoyable stuff.

Pours straw with a tremendous amount of suspendid particulate developing a haze. Head formation is very slim. Aroma is dirty straw, grain, barley, slim spicy and citrusy hops and biscuity, crackery malts. Flavor profile is an intriguing blend of spicy, citrusy hops layered with biscuity, bready, crackery malts. Hops and malts don't mold and meld together here well, instead separating like oil on water. Mouth feel is smooth with only a slight crispness coming through at the end. It has a medium-thick consistency. Overall, a slightly more hoppy lager, but it never seems to "work" together.

Clear amber with a moderate head.