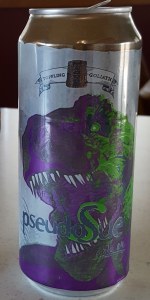 Notes: This single hop ale showcases the Citra hop. Named for the largest T-rex fossil ever discovered, she roars with ferocious aromas of grapefruit, citrus, mango and evergreen. Delicate in body with a mild bite in the finish.

Pours a thick hazy deep amber with an overflowing foamy head.
Bursting with mango, orange scent, grass with fresh rain.
Taste is a complex mixture of various sweet citruses carried on a malty substrait
So it smells like a hazy, taste like a pale ale.
Medium bodied, quite carbonated., finishes clean.

Not sure how this is a pale ale with its extremely hazy nature....that being said it's a damn fine beer. World class beer.

This second-most popular staple from my hometown brewery is initially something I thought was nothing special, but when I matured, I determined that it has pizazz; not overpowering, but just right. Not the absolute most special, but so satisfying.

Look: Pours a pale golden color with a lot of floaties that eventually settled. There was a nice, fluffly white head that slowly reduced to a very thin layer. The beer became a lot hazier after pouring the bottom of the can.

Taste: The taste definitely follows the nose. Strong grapefruit flavors with a moderate to high bitterness on the finish that lingers but does not overpower the palate. It's very drinkable. I think that the flavor filled out a bit also after pouring the bottom of the can.

Overall: Solid single-hop pale ale. To me, this toes the line between a pale ale and an IPA. Personally, I would probably put this closer to IPA territory than pale ale, but I can see both opinions. Regardless, it's very delicious, highly drinkable, and accessible.

One of the better Pale Ales out there. Has a very nice hazy appearance with light fruity tropical smell. I like the taste of the citra hops, juicy and mango citrusy flavor. It's a little light on the overall flavor punch to me because it's a pale ale at 5.8% but I can see why it's rated so high. Quality brew by Toppling Goliath.

Very hazy apricot color with moderate white head that retains well and produces some nice lacing. The aroma is citrus, pine resin with possible mango, pineapple and passionfruit notes, very juicy.
The taste is pine resin and grapefruit up front, mellowing into mildly sweet light malt with lots of tropical fruit notes - orange, pineapple, mango, passionfruit. The finish is lingering passionfruit with a return of the pine, very interesting and tasty from start to finish.
The body is medium, moderate carbonation, smooth and very drinkable.
Altogether this is one tasty and enjoyable brew that I would place somewhere between a NEIPA and a pale ale but it is outstanding, whatever. I already want more.

Simply put, this is a very nice IPA. It’s single-hop Citra, which is unusual in todays world. It’s hazy, but not extreme. It’s fruity, but not overly fat and sweet. Balance is the right word. I normally don’t line hazy IPAs very much, but this one I actually line a lot. A classic, had several gallons of this over the years, drank it again after taking a 2+ year break - it is still very good, I like it a lot. Did I mention: I’ve got a thing for Iowa. That might have played a role, too.

It tastes surprisingly juicy on the tongue, with tropical and citrus fruit notes. Mild hop bite and malty sweetness behind.

Overall a great beer. It’s less sharp and more balanced than Zombie Dust or similar Citra APAs, but quite flavorful. And light enough to pair with spicy food.

Poured from a can dated one month ago.

Overall: I can see why this is so highly rated and popular. In short, it has a simple hoppy aroma and flavor profile emphasizing citrus & tropical fruit notes from Citra hops. It is moderately sweet with a perfectly balanced bitterness that makes it's presence known but quickly fades into the background. It has a medium body making it light enough to not be filling but beefy enough not to feel thin. I like the carbonation level which releases nicely when poured properly. You almost feel like you about to experience some hop burn, but it never got there. Tough review for me because I expect American Pale Ale to be clear to slightly cloudy visually, so I had to give it lower marks visually. But this is one excellent pale ale that I enjoyed drinking.

Brought forth from a tap into a clear pint glass, it arrived with a modest and enduring off-white head. The color is a relatively bright orange-amber, considering how opaque it is. With it, come all the right smells of an American Pale Ale. Malt, hops both citrusy and piney, join with a hint of yeast and alcohol to make a nicely balanced, if not pungent, treat for the nose. These qualities are passed on to the taste, which agrees completely with the nose. The finish contributes a dry bitterness that augments the solid taste. There's just enough alcohol to add another layer without harming the mouthfeel. For the taste and body, there's surprisingly little glass lacing. Nothing new, but this is one good APA.

Pours a cloudy, strawberry wheat color with a white foamy head that hangs for a bit. Some nice lacing surrounds the glass as I sip.

Smells of citrusy hops and a touch of tropical fruits.

Mouthfeel is solid. Light carbonation with a nice viscosity.

Overall a solid brew. Haven’t been able to get this in our area until a few years ago and took a long break from reviews. Picked up a 4 pack to try. Worth the wait.

Hazy, straw, white head, mango, grapefruit, citrus smell, tropical fruity taste, smooth, not too bitter. No abv on can. Canned 11/18/21. Tasty, but it needs the abv on the can.

A: The beer is a slightly hazy orange/gold color, with a short white head that fades slowly and leaves a thick but spotty lace on the glass.

T: The taste starts out with a strong juicy sweetness from flavors of citrus and tropical fruits. Then a strong but not over-powering floral and dank hops bitterness comes in. The malt character is on the lighter side but brings an excellent balance. The after-taste is sweet and slightly hoppy.

O: Very tasty, goes down extremely easily, not filling at all, decent kick, very good representation of style. This is an excellent beer to drink for a very long time.

Pours a hazy light orange with a small fluffy head with moderate lacing.

Smells of piney hops and citrus.

Tastes of a mix of tart and sweet citrus with a barely bitter finish.

This very well made and very drinkable brew!

I order this one by the case. Case closed. The best pale ale ever.