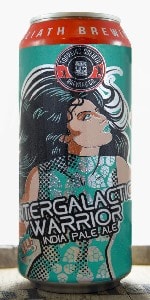 Notes: Galaxy and Warrior hops join forces to create a beer with a bitter punch. Big body, bold flavor, with a boost of citrus rind and just a kick of spiciness in the finish, Intergalactic Warrior is an India Pale Ale worth fighting for.

HarlotBronte from District of Columbia

Great looking juice bomb with the aroma of Galaxy Hops, it's a WOW beer. Not sure about the Warrior hop but it's creamy smooth and a delicious beer. Another enjoyable and different IPA. On Tap at "What's On Tap".

The aroma is a bit muted, but there's notes of ruby red grapefruit, orange rind, pineapple and passion fruit.

The flavor follows the nose: Grapefruit, orange rind, passion fruit, and pineapple with a subtle cracker malt presence and a spicy pine finish. Drinks far stronger than the ABV suggests.

The feel is medium bodied with moderate carbonation. Smooth with a relatively dry finish. Has a long, lingering bitterness that coats the tongue.

Overall, this is a pretty good NEIPA. It definitely leans more on the bitter side, but it's solidly well-balanced and easy to drink.

From a 10-day old can, pours a very hazy, almost milky light gold. Smell and taste are exploding with tropical fruit, citrus and resinous pine. Big bitterness in the finish, which offsets the fruity hops nicely. Loved this one.

middle of the road hazy for me try the other TP NEIPAs as top- shelf offers. This one just did pop for me, your typical tropical flavors just nothing standing out here.

smell: nothing obvious to me

overall: it's a session new England ipa, not as intense as king sue or something but still quality is good

I got a can of this beer from my good friend and old neighbor from the 'Wego. It poured a hazy golden with white head that is leaving some lace. The scent had dank citrus fruit notes. The taste was nicely balanced and easy to drink with dank citrus peel presence. The mouthfeel was medium in body and had good carbonation. Overall it is a solid beer.

I scored a biker's denim vest with the word "Iowa" embroidered along the back shoulder. This inspired me to CANtact the brewery about a patch for the vest. I was granted permission (one-time use) to have a local embroiderer direct-embroider their logo onto the back! I filled out the rest of the vest with Hawkeyes, Cyclones & RAGBRAI patches as well as a few other Iowa breweries that had patches available. Now, it is time for The CANQuest (tm) to have a beer! Just as I was finishing my run-through of TG beers in my backlog, a recent visit to Rieker Bottle Works revealed this one on offer & I could not resist!

I beCAN by Crack!ing open the vent & CANtinuing with a slow, gentle C-Line Glug into the awaiting glass. Once more, I was slightly startled by its lack of clarity so I allowed it to flow freely after that revelation. I still grossed just under two fingers of dense, foamy, rocky, eggshell-white head with decent retention, despite my stop & start action. Color was a deeply-hazy/lightly-cloudy Golden-Amber (SRM = > 5, < 7). Nose was both tropical, especially with a guava-like fruitiness and minty with a pine-like quality. I am a big fan of the melding of Southern Hemisphere & PNW hops & this set my hophead mouth to watering. Mouthfeel was simply medium, no frills involved. I was highly involved with its cool, minty, fruity taste, OTOH! It had the fruity sweetness that finally put me off of all-Southern Hemisphere hopped beers, but coupled with a cool pine mintiness that hearkened back to the turn-of-the-century AIPAs that got me hooked on hops in the first place. It was as cool as the Mentos that a coworker shared with me the other night. Literally breathtaking! Finish then, by extension, was cool & dry. I was quite pleased with this one. YMMV.

Another nice offering from the boys at Toppling Goliath. Lots of pineapple in this one with a slightly bitter finish. Balanced nicely and deeply flavored. Simple but executed well. Yes please!

Can from Tom, thanks for the opportunity.
Hazy lemon yellow bordering on gold with a frothy white head that persists. Citrus and pith with bits of tropical fruit and a hint of pine with some sweet bready malt underneath.

Very tasty IPA. Somewhere between a NEIPA juicy and a west coast. I think this brewer found the sweet spot. Loving this. A little more juicy than pseudo sue but easy to drink with some malt to keep it balanced. Glad we can get this fresh now in Pennsylvania just over the line from Delaware.

A - Very hazy and near opaque medium golden tan color.

T - Citrus and grapefruit abound from start to finish with some peach and pepper citrus rind mixed in. Finishes with a lingering pine and citrus bitterness.

O - This is a very easy drinking IPA.

Solid two fingers of off-white foam, surface heavily pocked, starts turning airy quickly with plenty of crevices, wispy lacing. Hazy golden liquid but not NEIPA level impenetrable. The nose has “throwback” rawness to it, salt and pepper, cracker, coal tar, biting grapefruit pith, the herbaceousness dry and helps it all stick to your nostrils, any pineapple, papaya, peach fruit scents close to an afterthought. Medium-bodied, a touch too foamy at first before settling into a smoother, semi-dry presentation. Repeats the powerful tart grapefruit matched with peppercorns and kosher salt. Really gets in your face. Good retronasal florality adds some prettiness at the end. Kiwi, melon flavors soften the pineapple base some. Letting it warm some also brings it into better balance. I found it refreshing and, again, a welcome experience given the plethora of NEIPA styled beers available hereabouts. (Canned 10/2/20)

Pours hazy yellow with an inch of white foam. Retention and lacing is plentiful. Clementines, peach, and pine in the nose. Medium bodied with a soft but tacky mouthfeel. Tangerine pith with grapefruit and pine on the palate. Finishes dry with lingering orange oil, minimal malt, and a firm bitterness.

16 oz can poured into an ipa glass

My first foray into Toppling Goliath. I'll definitely give them another try after this delicious treat.
Look: Golden straw color with an opaque haze.
Smell: Heavy on the citrus with a little guava mixed in.
Taste: For a single IPA, it packs a really great bitter punch. The mix of warrior and galaxy really works.
Feel: Full and heavily carbonated.
Overall: A great IPA!

T: Grapefruit, lime, grassyness along with bready dryness up front. Sour orange and grassy bitterness along with a little guava as this warms. Finishes with sweet & bitter oranges, a little grassy & herbal bitterness, & lime, plus some green melon & cattyness

Citrus, melon, and light dank from the Galaxy and Warrior buds jump out on the pour and subsequently in the mouth, with a touch of peach and spice added in for good measure. Nice grain exhale with subtle bitterness. A superb WCIPA from this outstanding brewery that hits the mark every time.

Look: A murky orange with fluffy white foam head.
Smell: Melon, citrus and a touch of spice.
Taste: Nice malt character with mild hop flavors. Melon comes through, some orange.
Feel: On the light side, not a heavy beer. Good carbonation.
Overall: I wish the ABV were a little higher, but pretty good.

Poured from a pint can into a tulip.

Tropical fruit, floral, and melon notes on the nose.

The brew is honeydew-sweet on the tip of the tongue, with tropical and mild citrus flavors arriving in midstream to join the party. Cucumber, pineapple, orange, pepper, and solid grain. Finishes fairly tingly with a touch of booze.

Another well-above-average TG brew, but it's mostly just evocative of other better ones. Almost like an effort to deliver a less-boozy version of King Sue, or a bit juicier Pseudo. Still, a tasty one.

Decanted from a 16 oz (473 ml) can into a muffin top pint glass; canned on 05/05/20.
A: Pours an opaque, dark orange color with a two to three finger, foamy, fluffy, white head, rim and parameniscal retention and tongues of lacing.
S: Floral aromas of melon and papaya evident with healthy amounts of barley and caramel. Chemical note: acetone?
T: Semidry. Palate hard to characterize: not terribly fruity, maybe some citrus, barley, and pepper that blends with the bitterness.
M: Medium bodied with medium carbonation.
O: Meh. Have really had much, much better. Rating seems more consistent with "cult of personality" of the brewery than reality.


Intergalactic Warrior from Toppling Goliath Brewing Company
Beer rating: 94 out of 100 with 530 ratings