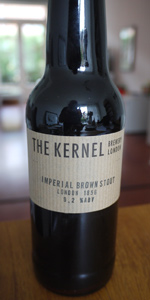 Listed as 9.9% here, my bottle states that it is 9.5%.
L- Pitch black, not a photon gets through it even from a halogen torch held behing. Pours with 12MM creamy super-fine bubble looking deep-tan head. [20mins later = holds well].
S- Coffee, then dark cocoa, toasted and roasted. Oh + some mild ABV% notes.
T- WOOOaaah, coffee, ESPRESSOOOO!!! Super-dark deeep roast, log-fires, cinders, smokey edges, hazy memories, possible regrets, furry hearth rugs, dreams, then that yeti the next morning. All of that plus a well numbed tongue.
F- Seemingly thick to sip, striking and very different. Or maybe it's an impression due the flavour being sooo intense.
O- This is a beast. You likely have to enjoy straight black espresso, there are deep parallels IMHO. This is whacking my palate, no point expecting to taste anything more delicate for a while later.
Would I drink again? I don't know, it's impressive, has vast-giant character but do I need to experience such over and over? Not really, I prefer subtlety and something I might enjoy year-around, incl certainly up around this %level. It's a massive statement beer though. Trust me, waaaay more than it's 9.5% suggests. It's certainly one of the top-10 (of c1500) beers I've ever had for naked outright pungency.
330ml bottle. Bought from TremblingMadness/York (home delv > London) for £4.99 BB: .?... perhaps 1,000 years in the future, this thing might be indestructible.... nope 'July 2025'.

Appearance: A dark dark brown colour with a reddish hue and a thin tanned head that disappeared quickly but left lots of nice spotty lacing.

Overall: Body was perhaps lighter than I prefer, but despite this, it was still very enjoyable and great to sip.

12oz bottle. Poured out an opaque, jet-black color with a small, light brown head of foam. It smelled of roasted malt, chocolate, molasses and toffee. Roasted coffee taste with chocolate, vanilla and molasses.

Straight up? It smells like Kahlua. Coffee, dairy creamer, and non-sweet (and non-bitter) dark chocolate. There's even some alcohol volatilizing.

The main taste is very heavily roasted coffee. Sweetness and bitterness might not have been on the nose, but they are up to detectable levels on the tongue, with bitterness winning the arm wrestling match. A little bit of desiccated dark fruit, somewhere between figs and prunes. Slight bit of honey. Alcohol shows up in the taste.

Weight is heavy, and the carbonation is fine. Aftertaste is unfortunately bitter charred wood, but the nose and taste were nice. It's also a bit disapponting that the alcohol isn't better hidden for a niner.

T: rich roasted malts and chocolate up Front. A touch of alcohol and a smooth nutty note behind that. A touch of bitterness from the roasted malt behind that, which almost tastes like wood. A slight earthy hop note towards the end also. Finish is roasty and rich

O: excellent stout. A decadent sipper that should be enjoyed slowly

Pours a pitch black coloration with a medium, creamy head. Smells wonderfully of dark chocolate, coffee and caramel malt, with just a hint of licorice. Taste follows the nose, with a rich dark chocolate and roasted coffee taste, backed up by roasted, caramel malt and a hint of licorice and vanilla. Very rich and smooth mouthfeel, almost oily. There's not a hint of boozyness to this, with an incredibly rich flavor profile and mouthfeel. Probably the best non-BA Stout I've ever had.

330ml bottle served in a tulip. Bottled on 20.10.16 Best before 20.02.21. Pours an inky, opaque black with a mocha-colored froth that disperses towards the edges into a thin tight band, leaving an oily residue across the surface. Nose expresses roasted notes and dark chocolate, as well as the merest hint of vanilla. Taste consistent with nose - quite nice. A true RIS - roasty, chocolatey and earthy with a slight char that lingers betweens quaffs. Mouthfeel is light-medium on body (but closer to light) with a mild, even carbonation. All and all, a wonderful example of the style. This beer stands on its own. No barrel-aging necessary.

HEAD: None. Just a brief pale khaki ring of foam immediately after the pour that disappears almost immediately. No lacing.

BODY: Opaque solid jet black (not brown, contrary to its name). No yeast/sediment is visible within. Looks like any other traditional porter, lacking any unique or special characteristics as well as the titular brown colour.

AROMA: Actually, I detect bourbon (even though I know it's not there). Vanilla mainly but no oak. That's odd.

Dark malts, chocolate malts, cream, a kiss of hazelnut. Malty as it is, it's not too sweet.

Quite appealing, but not up to par with the aromas of the best expressions of the style.

A pleasant aroma of mild intensity.

No overt yeasty notes or off-notes are detectable. No overt hoppy notes either.

Suits the taste decently. Doesn't accentuate specific flavours, but it does have a fairly heavy, hefty presence on the palate that plays well to the maltiness of the brew.

It's balanced, albeit simple for the style. There ain't nothing brown about it from colour to malt flavour; it's a pretty conventional dark porter.

Far from the most complex, subtle, nuanced, or well-layered imperial porter I've had, but well-built and cohesive. Not a gestalt harmonious whole of a beer; the build isn't seamlessly put together or carefully considered. It's more of a loose combination of flavours, most of which are effective. This doesn't have the concise deliberate flavour profile of better imperial porters, but I do like it.

OVERALL: It's a nicely executed imperial porter, and one I wouldn't mind having again (or aging), but it's not world-class fare. I've had far better, and I'm not sure what the "brown" bit is meant to refer to. A nice little English stab at an imperial porter, but it can't compete with the big dogs. Worth trying when in England, though.

Hides its ABV well and is more drinkable than many brews of this strength. A wee bit of age would likely mellow it out.

33cl bottle. Pitch black pour with a thin tan head. Smells like dark cherries, cocoa, chocolate and roasted malts. The taste follows the same notes, with an addition of both brewed as well as roasted coffee. Medium to full bodied, soft carbonation and a roasty bitter-sweet finish.

11.2oz bottle, dated 5/2/16. Pours black with a medium sized light khaki head; some lacing. Smells of roasted malt, citrus and earthy hops, cocoa, coffee, and molasses. The taste follows exactly with roasted malt, citrus/earthy hops, cocoa, coffee and molasses. The brightness of the hops seems to elevate the flavor. Light bitterness, medium sweetness, and medium lingering dryness. Average body and carbonation for the style. Overall, this is drinkable, fitting of the style, and has a very complimentary hop profile. Well done.

It's really good. Plenty sweet with loads of smokey chocolate. That's all I've got to say.

Bottled on 02/26/15. So it's one year and a half old when consumed
Roasty and bold ris. It's a bit on the dark fruits, cocoa, vanilla. It has almost a oak aged smoothness and roundness. The smell is great. The taste is a bit more boozy but nothing overwhelming. A bit of green apple

Pours a clear, sunny-amber color, with a huge froth head on top.

Smells of wheat entangled orange peel, spiced up by black peppers and coriander. Offers a soothing wet grass quality among toffee malts and a whiff of rock sugar.

Has a higher, lively carbonation, although the beer's overall soft and creamy mouthfeel prevails, while adding a nice refreshment to it.

Tastes of bitter cardamom and equally bitter lemon peel accompanied by white orange zest, hay and a rock sugar peak. Unusually refreshing with blood oranges and a note of black peppers together with a soft aqueous quality. Finishes with a world class creaminess, while a perfectly dosed, bubbly carbonation cuts through along with sweeter spices, and a still recognizable bitter counterpart from the beginning.

Fantastic beer overall, offers a unique twist while sticking to the style, perfected by its balance and supersmooth mouthfeel.

Pours thick, jet black into a tulip glass from a 330ml bottle. The mocha head, initially 3 fingers high, decreases down to a single finger after a while. The head has good retention, is close, foamy, and leaves excellent lacing on the sides of the glass.

The aroma is fantastic. Charred grain, woodsmoke, roasted dry expresso, tobacco, and booze. This stout has a really mature and complex aroma to it; very country club style nose. But best of all - it smells dry, and stolid; there's not really any other way to describe it. There's no cheapness, it has quality to the odour.

Jesus. The very first thing I notice about it, is the mouthfeel, but I'll get to that in a bit. The flavour has a balance like I've never had before in a stout. All the nose is present - the molasses char, the smoke, the dry expresso, but what I get most of all, is an oaty creaminess. It really reminds me of a well roasted, well charred, complex, oatmeal stout. There's a brown sugar sweetness, and a breakfast nature about it, with a great helping of tobacco, oak barrel, leather, and just pure abyssal gravity.

The mouthfeel is exquisite; it feels satin smooth, heavy, and yet quite dynamic at the same time. It weighs down the back of the tongue yet meanders about the front quite easily. This is a mouth coating, creamy product, make no mistake.

This is a game changer for me; the balance is something to be admired. I've never handed out 5/5's before in all my years sampling beer, but this deserves it. I sampled the Old Rasputin prior to this, and this thrashes it in my opinion. This just might be my favourite RIS so far; true to the style.; light yet heavy, smooth yet solid, creamy yet complex. Just go buy it.

330ml bottle from Good Spirits Co, Glasgow:
Another excellent Kernel beer, my first dark beer from them in a while & every bit as good as their IPA's & pale ales. An excellent beer with plenty of dark chocolate flavours & a nice, strong kick from the alcohol alongside nice coffee flavours & sweetness. Highly drinkable for the strength of the beer as well & exactly what I was expecting from this one.