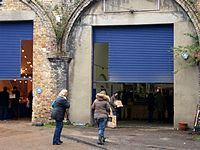 I have made the mistake of not going here until today. Only open on Saturdays, during the early afternoon (website says till 2 but ppl were there till early evening) hanging out at the Kernel was fantastic! To call it a bar is an overstatement. It's an open garage door to a brewery that sells it's beer and let's you hang out and drink. Outdoor seating next to elevated train tracks and a port a potty, bare bones yes, but on a nice day, all that was needed. Quality of the beers was superb as everything was as fresh as you could get it. Hell I tried a Coffee IPA that was not released yet and another strong ale the was weeks away from being done as the brewer (Evin, who's a fantastic brewer and very nice guy!) was just checking how it was coming along. Service, I mean you walk up to the desk and ask for a beer, hand them ££ and then they give you the beer, again bare bones but it's not REALLY bar. Can't give it too high a score for Selection as it is all just Kernel beers they are selling, but there is a decent selection of said beer. Food is exceptional imported meats and cheeses, but BYOB (Bring your own BREAD!!) no worries there is a Bakery right around the corner.
Fantastic!! Kernel is my favorite London Brewery and may have just become my favorite place to hang out. . .on a Saturday. . . afternoon!

wow! this was one of the best beer experiences we had anywhere in london. its on the beer mile in one of those archways, and they have quite a unique setup in their elongated space. the brewery is way in the back, some offices too, its kind of partitioned off with a little bar about a quarter of the way back, and they have a tasting set up. not sure if it was a special event or if its always like this, but basically its a makeshift retail shop up front that opens up to the street, with their beers all out for sale, and some tastings happening at the little bar. not sure if you could get a full beer here or not, but the pours they were doing were very generous. i didnt know too much about them before the visit, just a couple of their beers and that jester king collaboration, but nothing more. they do a ton of cool hoppy stuff in the ipa and pale categories, with simple, samey base beers and hopped with unique varietals and combinations. i loved the ipa with nelson and the pale ale with a hop i had never heard of called taiheke the best of these, but all were awesome. lots of hops and hop combinations that i was unfamiliar with. on the saison side they had a cool slightly funky series, one with hops, one currants, and one plums, all of which were epic, and on the dark side, there were a couple of stouts and porters that were among the best beers in the place, turns out the dont miss in here! even early in the day and on a pretty serious hangover, i found my mind being blown with each beer. dude serving them was mellow, patient, and sort of shy, but had some good information. it was weird that their glassware wasnt clean at all, more than just water spots too, it just looked filthy, which is no way to serve such awesome beer, but it didnt hurt it at all, just seems like every other detail is so carefully thought through that you would think they would clean their glassware better. huge selection across a ton of style, neat space, low key vibe with high end beer, which is what i love. cant recommend this place and these beers highly enough, it was really the highlight of our trip for me!

Open only from 9 or 10 am until 2 pm on Saturdays, this is a great little brewery. In fact, my favorite place in London so far. Arrived 11am, and there were already lots of people and a medium-sized line. By 12, it was pretty packed. One of the workers told me it was much busier the week prior.
As for the beer, pretty much the best local brew I've had since I moved here 8 months ago. Solid IPAs and stouts. Boughta couple sours in bottle to try later.
Concrete floors, old warehouse feel...a lot like being in a couple San Diego microbreweries I used to frequent. I can't explain the hours, but it really helps bring in the craft beer crowd as opposed to a night bar crowd. Only knock was service could have been better, but perhaps that is more a function of how busy they are. I would have liked to be able to talk about the beers with the staff a little more.
Great place.

I visited based on BA and some recommendations from locals I'd met. The Kernel is doing some amazing things to pull American hops and IPA trends into English beer. The location is a must see. It's in a stretch of railroad where they make great use of the spaces underneath the raised tracks. The selection is solid and the flavors are fantastic. I found the quality of the post summer beers better. The two I had that were brewed in August had lots of yeast sediment that infiltrated the pour. As a homebrewer, I know how to handle bottle conditioned beers but these still got away from me. But the flavors are outstanding. I think they'll be very successful in helping liberal hop usage find a home in England.

I recently spent a Sat afternoon drinking at the Kernel. I wouldn't even call it a brewpub. They brew out of an rented train depot. Pretty basic stuff. You can buy there beers and grab a spot in the near by alley and sip on a few beers. No frills at all. A few picnic tables and a ton of industrial refuse. That being said I found the atmosphere great. It seems to be a weekly meeting spot for many London based beer geeks. The food was awesome. Appearently they share the space with a cheese and cured meat guy. I had some on the best fresh Mozzerella and Speck I have ever had. Awesome stuff.

I would high reccomend this place if you are in London on a Sat afternoon. Great beers great food and great people. So what if you are drinking in a back alley!

Bring some American beers to share if you can. Evan, Nate and the guys definately love that too.

The Kernel Brewery in London, GB2, United Kingdom
Brewery rating: 4.03 out of 5 with 1215 ratings