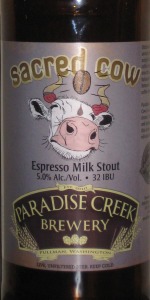 Poured from 22oz bomber into a pint glass.

Appearance: completely black with some dim brown outlines around the edge when held up to the light. Head is a finger of frothy tan foam. The overall presentation is quite attractive.

Smell: lightly sweet aroma with lots of coffee character and a little chocolate thrown in the works. There's also a little bit of vegetal hop thrown in the mix; characteristic for the style, but not really my favorite. Overall, not bad at all.

Taste: big coffee and chocolate character, along with an astringent roastiness. There's definitely a lactose sweetness here which really works quite well. Those vegetal hops are still in the mix, but lightly, and provide a balanced bitterness. Quite good.

Overall: I quite like this beer indeed. In fact, it's growing on me; the light touch with the sweetness complements the coffee and chocolate quite well, while the harsher elements tend to fade away quickly. Kudos!

22oz bottle purchased at a local grocery store – I think. There’s no obvious freshness date, but 12C14 is stamped on the label. I sure hope that doesn’t mean it was bottled six months ago, but at least it’s not an IPA.

Poured a shade of brown that was so dark it might as well have been black, giving up nothing when held up to direct light. Big, mocha-colored head, leaving lots of lace on the sides of a Mass Transit Ale nonic pint glass (thanks again for the glasses, Connie).

Roasty, coffeeish notes in the aroma. There’s also a bit of lactic acidity.

Reminds me a little of the taste of coffee ice cream. Coffee flavor leads the charge, backed up with a milk chocolaty sweetness that might be cloying were it not for the balancing bitterness of the espresso. There’s some slightly roasty nuttiness in the mix. Slightly acidic taste in the background, with a mild hoppy zap at the finish.

The body is somewhere between medium and full, with a coating, slightly slick mouthfeel.

This beer’s kind of a tweener. It’s not big or rich enough for a full-on dessert beer, not boozy enough for a nightcap, but a little too much for paring up with food. As a stand-alone bomber about an hour after lunch it works well, but I don’t think I’d want more than one at a sitting.

Aroma is a smooth blend of coffee and chocolate. Roasty, sweet, mildly bitter.

Poured on tap into a pint glass. It has a dark almost black appearance with a fluffy tan head. It has a rich espresso nose. It has a java taste almost mocha, like dark chocolate and espresso exactly. Very creamy very smooth mouth feel with a wet finish. Overall it is a good sweet stout.