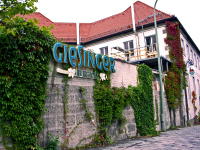 Beers ranged from above average to phenomenal. Wide spectrum of German styles on offer. Laidback, dimly lit ambience in the upstairs taproom; ideal for conversation. Seems like they attract a mostly local crowd. Service was a bit spotty as our waiter was quick to bring our first round, but we had to grab his attention a couple times after that. Still, this was one of the better places that we visited in Munich, and the beer quality was first-class. Recommended.

4.18/5  rDev +0.5%
vibe: 4.25 | quality: 4.25 | service: 4 | selection: 4.25
Giesinger is a charming little brewery south-east of München with an outside deck and a walled in parking lot that's used as a biergarten during the good weather (this is also where you pick up your beer if so inclined as there's a little shop to the side). Inside there's the brewery to the left, the bar straight ahead, and a small amount of tables as well as an entire upstairs floor and bar above.

They're known for their unusual brews and they will not let you down. They usually have 6 on tap, and then 7 or so of their more creative and exciting stuff in bottles.

There's food as well, and although I didn't try it I was impressed by the appearance and smell as it passed by me.

4.11/5  rDev -1.2%
vibe: 3.75 | quality: 4 | service: 4 | selection: 4.5
Giesinger is an interesting blend of old and new and well worth visiting if you're seeking either. Getting there is easy enough. It's roughly a 5 minute walk down Silberhornstrasse from the U-Bahn station. There's a tram stop there as well.
The first thing you'll see is an elevated patio with roughly a dozen (covered) tables. Inside they have a small'ish bierhall that's a mix of an American-style tasting room and a European pub.
On to the beer, right?
What sets Giesinger apart is their mix of traditional Bavarian beers (hell, dunkel, pils, weiss, maerzen, doppelbock, etc.) with American and Belgian style "craft" beers. When I was there, they had an American style barleywine (BIL!), a wheat stout, a Belgian tripel brewed with lemondrop hops, a rye Baltic porter, a doppelsticke alt, and a 30% ABV Eisbock. Quite the line-up for a brewery in Munich. The traditional beers seemed to be mostly draft while the others were all served from bottles.
The thing that surprised me is that they were all good. Of the traditional beers, the weiss was especially good. Even by Munich standards. The others were, too. No complaints at all. What about the "craft" beers? They were also quite good. Maybe even great. I'll be honest, I've rarely been impressed by German craft beers. For every really good one, there are twice as many bad ones. Yet these were all good. The barleywine and tripel were quite tasty and the wheat stout was mild, but still flavorful. I don't really have any complaints at all and these were on par with similar beers in America.
You can buy bottles and kegs to go (which seemed to be popular) and they also serve a full-service Bavarian food menu. I didn't try anything, but there were numerous people eating. It looked pretty standard, but I can't tell you much about it.
Service was typical for the area if not extra prompt.
I'll most definitely be back. It's a great change of pace for central Munich while still being steeped in the old world.
I guess reactions to their beers were pretty mixed when they first opened, but as of mid-2017 I think they have things very much dialed in.
Highly recommended!

EDIT: I was able to return in 2019 and am happy to report that they're still putting out great beers. I got a chance to try some additional traditional and "craft" beers and was really happy with everything. Giesinger is now easily on my must-visit list for the Munich area.

From the street, enter a small courtyard then up a flight of stairs to an outdoor patio, hen inside to the Stüberl. . Once in, there's a small area where tours are organized and merchandise can be bought. Up one more flight to the Stüberl itself. A curved bar seating about 10 is on the right, with the rest of the room having a number of heay, polished wooden tables varying in size from 4 to 16 seats. The left wall is brick with windows looking down on the brewing equipment, and large windows on the front and back allow lots of light to filter in. Overall, a modern, bright, airy place to imbibe. No music was played, just the sounds of happy revelers. They had 9 biers available when I visited; 5 vom Faß and 4 bottled "craft" recipes. I tried 4 of these - Weizenbock, Tripel, Doppel Alt and Baltic Rye Porter. They were decent to solid, overall. Service staff was friendly and efficient. Giesinger warrants a return visit at some point for me. Prosit!!