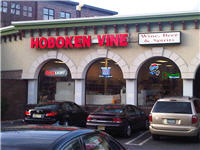 This place is a block away from my apartment building, so it is convenient, but boy does it suck. Limited releases are, well, LIMITED. They released 4 bottles of Founders CBS yesterday after posting on their Facebook page that they had 10 bottles - later making an excuse up that they gave 6 to their "other store" which no one knows anything about. They also sold a bottle to the first guy in line, but refused to sell one to his wife saying that she was a mule. Blatant sexism by the employee assuming that since she was female she was not as into beer as the male. Won't be going here again.

Selection is better than the average store, but not great. They have a few Bruery bottles and some seasonal releases, but nothing exciting. The manager is the one saving grace of this place, but sadly, I don't see him here often. Most of the clerks that I've come across are terrible. I've been getting into craft beers this year and when I try to ask questions about seasonal/limited releases they respond with "I dunno" or one word answers when I ask if they plan on getting them in, or if they have tried them in the past. Great customer service guys! /s

If you're in Hoboken go to one of the two Sparrow locations. The owner/manager, Laz, is super into crafts and the staff is awesome.

This happens to be my local beer store, located just less than 2 blocks from my residence. The store has a good selection of 6 packs on micro/craft beers as well as bombers. It probably has the best selection in Hoboken (which is great since I don't have a car and frequently don't want to take public transit or a cab to pick up beer). I find the prices to be fair and sometimes a little better than the competition or what I find in NYC.

I have had some great interactions with the staff since I started frequenting this store over the summer (I usually stop in about once a week). The staff is knowledgeable in their beer with members that are big fans of IPAs and Imperial Stouts. In addition to offering opinions on different inventory, they have been happy to point out some of the bars in the area that have the better selections.

Also, the store posts photos on their facebook page each week in they get in any new beers.

Once again BA serves me well! I was pulling into town to meet friends and I'd forgotten to bring anything. I could go up to Sparrow on Washington but that would be out of my way, and on a Friday night that would be madness. Then I remembered seeing a recent review for Hoboken Vine! Sure enough, almost as soon as I turned onto Observer Highway I caught their sign to the left, a block over on Newark Avenue.

It's a pretty big store, and it's fairly well kept and nicely organized. The wine prices were as expected; and they have an extensive selection. That follows for the beer. There's a whole wall of coolers along the back with about 20 feet for mainstream stuff, and 16 feet for more unusual items. And then - there are several shelves stocking larger bottles and more interesting / hard to find items. I picked up a Sublimely Self-righteous Ale from Stone, a Rugbrod from The Bruery, and the 16th Anniversary Wood Aged IPA from Great Divide. There were plenty of other beers I'd never tasted, however, and I even inquired about the price of the new Sam Adam's Infinium. Damn, I should have picked up that Belgian stout in the big bottle with the swing top. Oh well.

In the end, I wound up with a better selection than if I'd gone up to the store on Washington, and it would have probably cost me more even if they did have the selection, which they don't. Worth checking out!

I was bored one day and didn't have a car to drive to Jersey City Buy Rite (that place rocks, so big, so much selection and 10% off any 12 craft beers), so I decided to take a walk to this remote store, I was pleasantly surprised by their selection, defintely the best in Hoboken for sure. Had plenty of quality offerings from Stone, Mikkeller, Ballast Point, Great Divide, Firestone Walker, Flying Fish, Terrapin, Lagunitas, Oskar Blues, Troegs, The Bruery, Rogue, etc. All prices were fair and lower than anywhere I've seen in overpriced Hoboken. Worth the walk if you are in the downtown area for sure.

I'm both surprised and not surprised that this place wasn't on Beer Advocate yet. There aren't too many places in Hoboken one can get any real decent selection of craft beer and I guess it's because that Hoboken is strangely behind the times in terms of craft beer.
The Hoboken Vine, or "The Vine", located in a little strip mall type space off of Observer Highway in Hoboken, as I inferred, is one of the few places in that city that one can get any kind of decent selection of craft beer. Lately, they seem to try to get at least one new, different beer every week, if not more. Honorable beer selections include Southern Tier Harvest Ale and Chokolat, Stone 14th Anniversary, Great Divide Titan and Hercules, the regular line up of Unibroue, Chimay and Ommegang (as well as Ommegang's Triple Perfection), some Green Flash selections, some Victory, Long Trail, Oskar Blues, standard Belgian, German and British offerings... not a whole great deal of any one thing but a pretty thoughtful set of selections. I'm enjoying a Terrapin Hospecutioner from there at the moment. Because of the careful selection turnover seems to be good for what they carry. I've yet to experience a skunked beer from the place. Pricing is par for the course. $9-$13 six packs for the good stuff. Singles from $3-$20.
Service, while not gung-go is pretty enthusiastic. Most of the guys that work there are happy to talk about craft beer, let you know what's new in the place, and make recommendations if you are interested. They even tend to hold (limited) beer and wine tastings on Fridays and/or Saturdays.
While predominately a wine and liquor store, as business necessity seems to dictate, this place seems to want to make a statement regarding the beer they offer.
You're probably not going to score a forbidden bottle of Westvleteren 12 there, but if one expresses interest, one might be able to get a bottle of something they were only able to get one case of. They'll be happy to special order for customers.