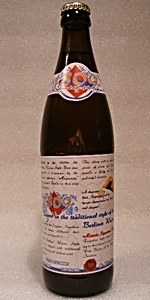 Notes: Already in the 1600s the Berliner Weisse Style Beer was mentioned in documents by the French reformers "Huguenots" as they crossed Berlin on their way to Flanders. In 1809, the Emperor Napoleon and his troops celebrated their Prussian victory with it.

This Berliner Weisse Style Beer is brewed with traditional mash hoping [sic] and without wort boiling. This along with a traditional strain of lactic acid bacteria provide a fruity and dry but palateful character. A character that Napoleon and his troops characterized as "lively" and "elegant".

Forgotten styles brewed according to their historic recipes by Dr. Fritz Briem, of the Doemens Institute.

A hazy straw yellow pour with 3 fingers of foam.

It smells earthy, with lemon citrus that imparts both tart and spicy notes.

Light body with perhaps too much co2.

This is very nice.

A - Hazy pale yellow, like a slighty more colorful lemon juice without the pulp.

S - Banana, clove, wheat; just like a Bavarian hefe, with a slight sharp twinkle in the background.

T - Big banana, clove, and wheat taste, again, very much a Bavarian hefeweizen, with a pronouced mild tartness that instantly makes you think of lemons with white grape skins. Fantastic and refreshing.

M - Very bubbly and effervescent, with a heaviness between that of a standard every-day Berliner and a gold-standard hefeweizen, ie Weihenstephaner.

Billowy head,
grainy aroma,
citrusy, wheat beer, grainy, not super sour, not mouthpuckering but more like the limey flavor in corona with a lime wedge,
mouth feel is crisp and refreshing
A good beer if you like german wheat beers

Served cold into a tulip glass, the beer has a very pale golden yellow color and slightly hazy clarity. Head is small and short-lived.

Aroma is full of tart fruits with a little sweetness and spice.

Flavor is excellent. The lactic really shines in the pale malt base. It has great tartness and subtle funk all on display to enjoy. There are peaches, cherries, and apricots but it never seems too sweet.

Mouthfeel is light in body and moderate carbonation.

What a delightful beer. Such great flavors and beautiful balance. Everything is in harmony. I really wish we could get this in Colorado because it's just excellent.

Poured into a tulip. The color is very light straw and clear. There is a spritzy half inch head that shrinks to a layer around the edge of the glass.

The aroma is popcorn and wheat malt with some nice lemony tartness.

The taste has some mild wheat malt flavor in the start. This is quickly overrun with a clean sour lemon tartness in the middle and finish. The balance is heavily emphasized on the tartness.

This is very light with smooth carbonation that is only slightly spritzy.

This is very delicious and is a slightly more drinkable alternative to lambics and gueuzes.

The beer pours pale, straw colored with a nice frothy head that exits fairly quick. The aroma suggests citrus, spice, light fruit and a touch of funky barnyard mustiness in the background. It is fruity, very tart, dry and refreshing, with a hint of sourness. The quintessential summer afternoon beer. It’s not potent enough to do too much damage. The tartness encourages you to drink slow and the tartness and fruitiness especially in the aftertaste help it last.

Tall head that quickly recedes to nothing, with no lacing. Cloudy straw yellow/lemonade color. Smell is lactic acid, lemon, and bready, and the taste mostly follows this. Medium bodied with lively carbonation and a dry finish. A nice example of the Berliner Weisse style.

S: Creamy wheat with citrus fruit and herbal notes. Light and pleasant, not sour at all.

D: High due to lively acidity and carbonation. Would be great with pizza or savory crepes.

Overall this is the first Berliner Weisse I have tried and I must say that the style is to my liking. Great beer.

Edit: If you don't like the sour taste, drink it with something greasy. Having it with Camembert cheese now and can hardly feel the sourness.

It's not often that you see an example of this style in stores. The only example I've tried comes from Dogfish Head.

Regardless, pours a beautiful bright yellow color with a thin-head into my glass. Love the color, even if others would find it average.

Tart with citrus and cherry in the nose. A huge whiff of wheat in the aroma as well.

Ditto for the taste. Tart with cherry and light citrus notes. Cloves and wheat make up the rest of the taste.

Lingering citrus, cherry and tartness followed by a hint of clove. Very interesting.

Wow, now this is to the style! I didn't know what to expect but I have to rate this high for drinkability, etc.

500mL bottle poured into a Rastel Hefeweizen glass. No date on bottle.

Appearance: Huge head upon pouring. I really had to let this one settle down a lot until I get the whole bottle into the glass. Very slow pour but some yeast did get in towards the end. The beer initially poured a clear straw yellow which later turned yellow with some tan-brown due to the yeast. Indeed, once the yeast got in there it became a hazy translucent beer. The foam was a huge white crackling / big-bubble head initially but this finally died away after pouring everything in. Lots and lots of bubbles coming up through the beer the whole time.

Smell: When the yeast was on top of the foam - it was very much like a classic Hefeweizen but with more grain and yeast smell, but once this sank to the bottom, the smell changed completely. The smell was now floral, lemony, a little bit astringent, and mildly musty/yeasty. Very interesting.

Taste: Now this is a very unusual beer. Crisp tart apple and lemon with a hint of wheat grain at the end. Dry finish. In a way....very much like a sparkling water in the mouthfeel and taste combo. The lemon flavors become more pronounced as it warms up.

Mouthfeel: Carbonated in a very good way - not fizzy, but cleansing of the palate and like a good sparkling water, but with more heft to the liquid. Very interesting mouthfeel to this beer.

Drinkability: Hmmmm....such an unusual beer I'm not sure what to make of it in the end. Refreshing, but I wonder if I would enjoy the styles of this beer fresh with the fruit syrups put in like they do in Berlin. I say this because I have a sweet tooth and after awhile the sourness of this beer gets to me. So while I could not have another, I say this because I don't have something to pair it with. With the right food I could probably have another. But by itself, no, one is enough. Still, I greatly enjoyed it and I'll have to figure out another occasion to try another one of these.

Served in a Chimay goblet.

My first Berliner, so I figured I'd attack this one "ohne Schuss"...always time for Schuss next time, right? Well, let's see... ... ...Sorry, the jet of bubbles through the champagne-y gold's got me all... ... ...Finding Nemo and whatnot... Shake it off, man, shake it off! Alright, maybe a good, healthy sniff will divert my attentions elsewhere. It's a bit light, but it'll do: some wet, spicy straw, coriander, peppercorns, and lemon peel. If nothing else, my trance is broken (at least momentarily), the perfect opportunity to get a taste in before the bubbles regain their insidious hold on my apparently weak spirit. The taste is heavy on the lemon peel, with those peppercorns and coriander seeds grinding their way about before having some less-than-innocent meetings with some funky characters. Not as sour as I was led to believe by my contemporaries, but not all that blunt either. Really interested in trying it mit Schuss now. Without it, it's pretty dern light and airy, leaving me with a pleasantly dry, tart aftermath. Prolly would be nice on a summer day in Saxony, mit oder ohne Schuss; gonna haveta try that someti-- ... ... ... ... bubbles... ...

Crackling carbonation is quite high. Like a Perrier sparkling water. Nice head. The cleanest of light golden yellow bodies. Aroma is dominant with Granny apples, but there's also lots of lemon. Floral, fruity, Autumn apples. Taste is tart but not as sour as I had hoped. Fruity and dry. Thin, crisp, refreshing mouthfeel. On the bottle: Lactic acid. Mash hopped, No wort boiling...Hmmm I'm intrigued.