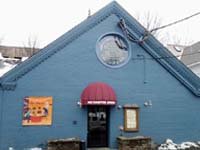 Reviewed by krantul from Massachusetts

4.41/5  rDev +10.8%
vibe: 4 | quality: 4 | service: 5 | selection: 4.5
Another reason to like Northampton: a clean, bustling brewpub with an interesting selection of beers (Wee Heavy, Raspberry Lager, amongst "standards") at good prices. The beers are pretty good. If I heard correctly, this place has a connection to Smuttynose and uses a couple of their recipes (owners being brothers, or something?), so this is pretty decent stuff. They had one or two commerical craft beers on tap, and I personally spied no crap beer on the premises.

It was fairly lively for a mid-week evening, and our bartender was very vigilant about replacing our empty glasses with more pleasing full ones. It was really some of the better service I've received at a bar in recent memory, but then again, people AT the bar usually fare better. I can't vouch for the quality of the table service. We came here for "dessert" after dinner, so I can't judge the food... NoHo offers some pretty tough competition when it comes to dining, though.

Reviewed by GHow from Connecticut

Reviewed by connecticutpoet from Connecticut

The staff is friendly, they seat you fast, and the waitstaff is very helpful. The selection of beers is very good, both brewed there and guest beers on tap. The food is awesome, and there are even a few selections for vegetarians. Not quite as easy for vegans. They do some local sourcing.

If you're ever in the area, it's well worth a few hours to park, go to the brewery, then walk off the beers in the marketplace.

It was early afternoon on a Friday in January, and there was a decent crowd at the bar, and in the booths downstairs when I arrived. When the hostess finally got to me (a sign said 'wait to be seated', but there was no one at the hostess station for at least 5 minutes, which was kind of awkward) I asked if I could sit upstairs, as it was a bit dim for my taste in the bar area. She was very accommodating, and led me upstairs to a comfortable booth with much better light.

My waitress was right there for my order, and I decided to try a flight of IPAs - they had 4 IPAs on the beer selection menu, which had at least 10 of Northampton's beers on tap available that day. A fight was four 6 ounce servings for $10, which is good price. When they arrived, the waitress give me a written chart listing all the beers ordered - a really nice touch for a beer geek! I enjoyed them all, but the 'Mean Green' DIPA was exceptional. I ordered a second flight to have while I ate, and once again I was not disappointed, with the Red Ale and 'Deckbier' standing out.

As for the meal, I had the chili, which was reasonably priced and tasty. I would have appreciated a few more chunks of beef, which was quite tender, in the chili, but overall I was satisfied. For dessert I had an apple crisp which was delicious, and went well with 'Pomona', the one lambic style beer I ordered in my second flight.

This brewery has lots of interesting events going on, including a beer & cheese night, movie nights, and even a painting class that includes beer. There is a deck that must be a fun hangout when the weather permits. If I lived in the area I would definitely be a regular here, and will certainly drop by the next time I am in the Northampton region.

Reviewed by Johnct from New York

4.06/5  rDev +2%
vibe: 4 | quality: 4 | service: 4.5 | selection: 3.75 | food: 4
Quaint little brewpub a block or so off the main drag with somewhat of a collegiate meets sports bar atmosphere. Odd shaped bar in center of room seats about 15 with additional tables about the room. 10 assorted beers on tap, I enjoyed the stout very much. Friendly personable bartender. Somewhat run-of-the-mill pub menu, though a bit on the pricey side. Parking can be a challenge at times, but overall a fun stop.
Sep 07, 2014
Rated: 3.75 by Stagga_Lee from Massachusetts

Reviewed by SABERG from Massachusetts

A - The atmosphere is split 3 ways. The bar area, the upstairs dining and the roof deck. The bar is a little congested but not impersonal. The upstairs dining, partially open to the bar below is lined with booths and a few center tables for larger groups. The roof deck is multi level and updated. Misting nozzles take the edge off of the warmest days. The décor and audio are all good, the bar area has several large flat screens.

Q - The food and beer are very good. Rarely is the kitchen "off". The menu is pub fare and now a focus on flatbread makes for a nice addition. The beer is solid, several standard offerings like ESB, and a variety of hop forward IPA's.
S- Service is sustained by many long time staff members who keep the service consistent. The brew team is great, kitchen very solid.
S - The food selection has some depth, specials are supported by use of local seasonal farm products. The beers are mainly house made, up to 10 drafts with some guest taps, there are some limited bottle offerings.
F - The food quality is solid, they have superb salads and now the specials have stepped up some. We enjoy the catfish bites and a pint almost weekly.
V - The value quite good. The beers are $5 a pint with short pours available. The food is well priced. A couple can do well here for under $40.
Highly recommend a visit.