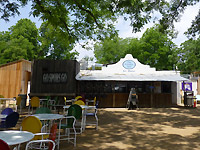 View: Place Reviews
Reviews: 24 | Ratings: 50 | Log in to view all ratings and sort
Reviews by Magery:

When I saw this place had a high rating, I wonder if I had stumbled across TijuanaBrotherAdvocate by mistake. Nope... it's BeerAdvocate. Weird.

Let's start with the best thing about this place - it's a good laid back vibe.

Now that the positives are out of the way, let's talk about the issues:

Selection I gave a 2.5. Sure, they have a lot of beer, but I saw some very very very very very old beers that probably aren't suitable for aging (ex: Freetail 6th Anniversary, a hoppy red ale, almost a year late and Saint Arnold Spring Bock... in December). If they are shooting for a cellar program... they're doing it way wrong. Having a huge tap list isn't that cool when everything is old and out of date. Fail. This also overlooks the fact that everything is severely overpriced. Unless these guys are paying Downtown New York highrise rents for their basically empty plot of land... I can't imagine the overhead is very high... especially considering...

...the bathrooms. Let's talk about the bathrooms. These might seriously be the most disgusting bar bathrooms I've ever set foot in. Straight out of the Mexican cantina from the shootout scene in Desperado.

It's actually a good thing everything is served out of a plastic cup here... because judging by the upkeep of the restrooms, I wouldn't trust these guys to wash a pint glass for me.

Didn't try the food because... well I saw the bathrooms and I didn't want to die.

Recommendation: go literally anywhere else in the area.

Whomever started the Friendly Spot had a great idea! It's basically just food and beer stands on a big open patch of land. Of course bad weather hurts you, but there's a lot less to have to deal with - no washing dishes, etc.

As for the experience, I thought it was cool but it just doesn't match that of a bar or restaurant. I mean it's not like my friends and I don't get together for pool parties, porch parties, and outdoor hangs all the time with good beers and food. The one difference is we don't have hideous bathrooms! Ha! And, of course, it costs us much less.

As to the beer, great selection yes, but I personally have a hard time enjoying an unusual beer outside, and out of a plastic cup. And if I'm going to pay for it I might as well have it at home. So for me that part is kind of lost. I had something fairly basic and just chilled with my wife soaking up the atmosphere, and that's what I'd do again if I went back again... no special beers, just a trusted go-to.

Its a pretty cool place, but the prices are kind of high.

Cons:
Pricey
Bathrooms are not great
All outdoors

Not sure how the rating is so high for this. Plastic cups, man! Plastic cups for all their beers. Apparently it's a San Antonio thing since The Filling Station does the same thing but they charge a lot less, do growler fills and the service is cooler and more knowledgeable.

I got a pour of Divine Reserve and got a half pour (in a plastic cup) for $9. Whaaat? In San Antonio? In a plastic cup? Nah chill.

There's a play area and lots of kids were there so that was nice being on vacation with the daughter but the huge dropoff on the play structure seems to be begging for an accident.

And the tables and chairs up in the place were on some trailer park status. Rusted out as hell and cheap plastic everywhere.

Overall I get the impression the place is cheap and dirty but doesn't mind raping customers seeking a good beer.

This is a mighty cool spot in a cool area of San Antonio I was not aware of- Southtown-King Williams. The stretch of South Alamo Street where The Friendly Spot is has a ton of restaurants and bars and an atmosphere that reminds me of New Orleans.

We got there on a sunny winter day, it got up to 75 degrees during our drive from Alpine. I can tell this would be an awesome spot to enjoy when the weather is mild, but even in a colder day with a coat on the idea of an “ice house” is cool (pun unintended). They had a DJ and a massive screen with the Spurs game playing.

10 taps at the front bar and 48 (the most interesting) on the bar back. Patios galore, chairs and tables scattered around and a barn for shelter in case the winter really hits San Antonio (but what about the poor bartenders outside??).

Prairie Bomb, Free Will La Muerta, Clown Shoes Extremely were some of the big beers on tap during my visit… plus a lot of Texas brews. The menus are on a screen behind the bar and have all the info you need (except for price, sadly). I paid between five and seven dollars for most of the beers the wife and I had, except Prairie Bomb, which was a rip-off at eleven bucks.

Service is friendly and knowledgeable, the bartenders will guide you through the menu and give you some tasters. The food menu looks good but we didn’t try anything because we were going for dinner at Hot Joy across the street (great modern Asian, check it out). The goat-cheese dip and the edamame-veggie burger are on my list for my next time at The Friendly. Love it here.

Laid back place with a small playground for the kiddos out front. Excellent selection, knowledgeable staff. No frills. Not for the pretentious our self-absorbed. Just a great place to kick back and share some brews with friends.