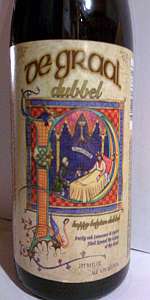 Notes:
View: Beers
Reviews: 10 | Ratings: 17 | Log in to view all ratings and sort
Reviews by AmericanGothic:

Poured from a 25.4 oz bottle into a Unibroue tulip.

A: Pours a hazy, light brown color with one-half finger of pale tan head. Not much retention and lace.

S: Odd-- berries and a little booze. Not bad but not what I was expecting.

T: Leads with a slightly funky caramel, there are also traces of dark fruit and molassess. Finishes lightly bitter. After a few sips, some light, tart cider joins the mix. Then a slightly boozy butterscotch, and pepper. Interesting flavors, but not hanging together really well. At the very end, some cinnamon.

M: Feels too light, but the carbonation is good.

O: Not bad, but it seems a little unfocused. This is reminding me a little of the Petrus Oud Bruin, which I wouldn't expect from a Dubbel. Well, give it a try, you might like it better. Probably not one I would buy again, but still good enough to finish the glass.

L- Deep chestnut, slightly hazy, very well rested yet pours with insanely huge mid-tan foam head, currently 7-10Cm high.
S- Bready, malts and a mild hint of spice.
T- Somewhat low-key for a Dubbel, though the 6.5% ABV doesn't give it a much of a foundation to build upon. A bit of caramel, somewhat toasty.
F- If you told me (blind-tasted) this was an English 6.5% trad ale poured on hand-pull I'd be having difficulty finding aspects here to suggest you're fibbing.
O- Doesn't strike me as particularly Belgian, or dubbel in style. At the same ABV and in a not disimilar profile (if not style!) there is Abbot Reserve Ale (UK) which IMV is going to give a broader more intricate flavour and cost a fraction of what this beer cost.
330ml bottle. Bought from Bacchanalia, Cambridge/UK

ps. The lable has gone from an intricate image of an illuminated intitial on an ancient manuscript to a very basic most text based brown and ochre affair.

Appearance: pours a clear brown color with a 1/2" head that breaks apart quickly to form a few big surface bubbles.

Smell: caramel, earthy tones, and some yeast are all that is picked up by the nose.

Taste: caramel, ripe red plums, hints of raisins, yeast, and a mild bitterness are wrapped in a earthy blanket.

Drinkability: overall this is a decent dubbel that was easy to quaff. There are better dubbels out there but this will hit the spot if you are in the mood for one.

Brilliant blood orange with ripe tangerine and polished brass highlights. The sandstone colored crown doesn't look Belgianesque, but it still looks good. The foam is firm and sponge-like, with large craters and small pits in its upper surface. Very little lace makes it to the glass.

My first Brouwerij De Graal beer is far from the best dubbel on planet Earth. One fairly major problem is that there isn't enough carbonation. That leads to a beer that struggles to stay inflated enough so that all the nooks and crannies of the flavor profile can be prodded and probed. Assuming any nooks and crannies exist, that is.

This is a light-end-of-the-style dubbel, but it's clearly a dubbel. Flavors include lightly toasted brown bread, caramel apples, English breakfast tea leaves, an herbal woodiness and a pinch of ground clove. Problem is, the various components don't fit together very well. In other words, the whole is less than the sum of the parts.

Sweet, bitter, tart and spicy are all present in roughly equal measure. The result is very little verve and a paucity of panache. It's hard to figure the brouwerij's claim that this is a 'hoppy Belgian dubbel' because it's pretty much middle of the road in that regard. Warming changes nothing with respect to the flavor profile.

The mouthfeel is this ale's Achilles' heel. With a proper amount of bubbles, I have no doubt that the final three scores would have been 4.0, 4.0 and 4.0. As is, it's no more than light-medium, loses its way on the finish and has next to no lift.

Since several more De Graal ales are biding their time in my cellar, it's my hope that Dubbel is the exception rather than the rule. $8.29 isn't bad, but then the beer isn't that good.

The beer pours with a fizzing sound. The clear liquid is gold-red-brown (35 EBC). The beige head is airy, it dissolves quickly without any lacing.

The smell is mild, unbalanced and a bit frowsy. Phenolic spices and some dried fruits. Caramel, bitter oranges and some alcohol and chloride.

The taste is fruity and somewhat roasted. Red berries, Caramel and toffee, some warming alcohol, hints of nuts and bitter almonds. Light body. The aftertaste got growing bitter notes, bitter almonds, dry hints of leather and caramel, green apples and sweet fruit drops. The finish is dry with notes of Carambola.

The carbonation is medium to light, the fresh bubbles mid-sized. The liquid is semi-dry and light.

This is one light dubbel. Perhaps something for the beer-drinkers unexperienced with the style?

Best before 06-05. Poors in without to much of a head and whats there is yellowwhite but soon gone. Beercolor is brown with huge particles foating in it.
Smell is very spicy and with that some maltarome mostly darkmalt and sweet ending with litle roastnote. Taste is mostly sweet, full bodied with maltaromes, yeastspice and a sweet aftertaste. Gues they forgot about adding anything with bitterness. Rich flavour makes the beer big in mouthfeel but the "not fresh and fruity" note makes it not that drinkable to me. Something else though.

Picked up a mess of dubbels on a recent trip to Brussel that I haven't seen in midwest US. This one was 2.50 Euro for a 330 ml bottle notched with a best by date of 06/11, might have been on the shelf for awhile!

A-Poured into a chalice this one gives about a finger of light tan head that breaks down and hangs on the side of the glass. That murky brown color with some red tints remniscent of a dubbel is here.

S-Yum, definitely a dubbel. Rich malty sweetness-cookies with a touch of molasses, fruity esters (fresh apples and raisin maybe), a touch of spicy phenols and alcohol.

T-A lot going on here but is a bit hard to figure out all the flavors and sensations detected here. Sweet toasted malts with carmelized notes, a bit of an earthy touching on tobacco flavor in here (hops?). Not overly rich but satisfying and light.

D-This is tasty and easy to enjoy. With a little lighter alcohol content than most, I wish I had more.

O-I love the complexity of the Belgian dubbel, so hard to find 1 in the US that rivals these. This 1 exceeded my expectations. A wonderful beer that makes me feel like I'm sitting in a Belgium cafe.

Smell is of honey, syroup, malt and floral notes

Mouthfeel is its standout feature refreshing prickly yet creamy

Aroma is caramel and yeast.

Taste is on the sweet side, but not in a good way, very average.

Mouthfeel was not very good. Lack of carbonation combined with a watery feel left it wanting.

Maybe this was on the shelf too long.