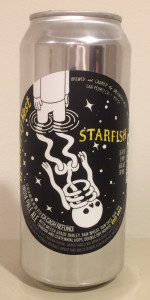 Light golden color with a 3F head in a Mikasa Tulip.

Looking forward to tasting their beers.

Undated, though presumably recent (my high-turnover local just got it in yesterday). Poured from a tall-boy into my Bruery tulip.

Orange and mango in the nose. Faintly spicy, but not much pine.

The rich, unique grain bill comes through on the palate, each part of the grist taking its turn on the stage. Low to moderate bitterness with faint pine and grapefruit, but overall the hops have a watered-down quality. "Juicy" I suppose, but I don't think this "NE" style takes well to the C-hops involved. Spicy finish with a lovely malt bill in any case.

Average, zesty mouth-feel. Some heat from the alcohol.

I enjoyed this more than the rating might imply, but this isn't really to style as far as IPAs go in my opinion.

Got three NE style IPAs from this brewery at the WF location in Pasadena.* All were well-priced and incredibly delicious. I'm going to review them in order.

L: This is the one that caught my eye. Simple but beautiful can art, love the wavy cartoon skeleton. Poured into a pint glass, it has the color of orange juice with a splash of whiskey, and is just as hazy, but with no visible sediment. Lacing is profuse, and looks cuddly.

T: This one is a little tart, but it's still very smooth. I usually prefer more bite in my IPAs, but there is certainly a place for something more on the creamy side. It would be very much like drinking carbonated orange juice mixed with papaya and mango, if not for the marvelously clear presence of the four grains.

F: This is hard to judge, because it's heavy for a single IPA. More of the feel you'd expect from a Belgian Tripel. I'm going to give it good marks because I happen to like it.

O: The barley, spelt, rye and oat grains are clearly high quality and make for a heavenly base. I highly recommend anything this brewery puts in a can, especially to IPA newbies.

*Technically New England is in America, so I can't exactly claim it's mislabeled. Yet, it is clearly the same style as Tahiti Substation and Fa Really, and they're categorized as NE IPAs... ¯\_(ツ)_/¯

Like my Jr year Anthropology teacher, there ain’t nothing wrong with this one. It may not be a freak like that lil minx, but it is devilishly good. Raul almost ventured to say that it’s a Hefeweizen IPA; there are some serious banana flavors going on right here - and Raul is into that. Creamy, hoppy, bananay... yep!

Looks like a murky and clumpy glass of grapefruit juice with a soapy white head that leaves a blanket of lacing. Smells very citrusy and piney with some sweetness. Tastes juicy and sweet upfront with a leafy, piney bitter finish. The bitterness is quite aggressive and replaces the sweetness and fruit instead of complimenting it. The finish is quite grassy and bitter.

Poured from a 16 ounce can purchased at the source, but not dated. Hazy light orange under a one-inch thick white head which leaves semi-rings and clumpy lace. Aroma is fresh pineapple and floral notes with faint pine. Flavor is juicy pineapple and oranges with some herbal notes. Medium body and moderate carbonation. Soft, bitter and grainy finish. Need canning dates on these to ensure freshness.

Herbs and fresh cut grass explode in the nose. Some pine and a ton of resin.

Taste is like orange juice that's on the edge of going bad with grass and resin. Lots of rough grainey flavors as well.

Not super psyched on this. It tastes like the beer may be a little old. Seems like some of the hop flavors have deteriorated as a result of some aging. Unfortunately there is no canning date to determine age.

Can of unknown age into a tulip glass.

T: Follows the nose mostly, which isn't necessarily a great thing. More prominence of the grapefruit than showed on the nose. Finishes with moderate bitterness and astringency, both linger.

F: Medium bodied with medium-high carbonation. Tongue burns and tingles from the carbonation and astringency.

O: Not sure if I got an off batch, or perhaps a poorly stored one at the distributors. But this is a miss for my palate and preferences, with no desire to revisit. In general I've been typically less impressed with Brouwerij West recipes than most it seems, perhaps their yeast strains are not to my liking.

Aroma is a full, pleasant mix of pine, citrus fruit, and some earthiness at the end.

Taste follows aroma but with a pronounced bitter bite throughout.

Mouthfeel is pretty heavy for a regular IPA, smooth but the bitterness is more than solid and stays put.

Overall, a very unique take on the hazy, fruity craze. Not a NEIPA in any way but appearance really. Pretty high on the bitterness scale for even regular West Coast IPAs.

Smells of pine, clean citrus, and some peach

Taste follows, but has a strong finish of bitter lemon rind. Herbal as well.

Lightly carbonated, a bit of chalkiness.

Certainly not a traditional “NEIPA”. Less tropical fruit, more characteristic of a west coast ipa....with the pine, citrus, and herbalness

California is slowly but surely developing its own unique style and take on the "NE Style IPA". Even more so, Northern California and Southern California are both themselves branching off in an interesting path that is at once divergent while still very much in the same direction as the West Coast IPA.

The California NE Style IPA has grown more bitter, less hazy, and more attenuated. Even while emulating a beer that is by very definition the polar opposite, both in coast and characteristics, California Hazy IPAs have taken on a flavor character that is distinctly Californian. Culturally, the haze is dissipating, the bitterness is increasing, and the attenuation is dropping.

This evolution, however, is not without its own sub-evolutions. Much like a bird in the Galapagos, Northern California Hazy IPAs are evolving to meet the local demands and becoming much more West Coast than their Southern brethren. Southern California Hazy is distinctly bitter but maintains much more haze and sweetness. It is as if, at least in LA, the image of the Hazy IPA is more important than tasting like one. The Southern Haze drips in under-attenuated sweetness and fruity yeast esters while still tar and feathering the back of your tongue with citrusy bitterness. The cloudiness is North East, the yeast is North East, but the malt and hops are all West Coast.

Northern California Haze is almost intentionally trying to defy the trend and differ for the sake of differing. The beers are unfiltered, but the yeast is vigorous, not lazy. The hop bites, the finish is clean, and the color is bright. Yet the drinker immediately knows, this is not your grandpa's IPA.

As Northern and Southern California NE Style IPAs both diverge toward the west coast palate, they also diverge separately towards the cultural palates of their respective geographies. What the drinker prefers is their own decision to make. People will line up and clamor for the beers just the same in both locations. The madness for juice will persist regardless of place of residence because the beers are (almost) all just flat out good.

Yet as this craze continues, so does the evolution of the style. Maybe there is something in the water that is causing this metamorphosis, but whatever it is, beer drinkers everywhere will be enthralled to see what comes next.

This beer is great if you like your Haze Southern Californian. The beer is distinctly familiar, but not your stereotypical NE IPA. The beer is sweet and fruity, but still firmly bitter and crisp. If you bought this expecting Tree House or Heady Topper, you will be let down.

Expand your expectations and indulge in a NE Style beer that is uniquely Southern Californian. It is an excellent beer if you drink it as an original take on a style and not a one to one clone of that style.

Good initially, but was not a fan of the overly sweet fruity flavors in this beer. I think the issue was that the hops did not come on strong enough to provide the proper balance.

Poured from 16oz can into Spiegelau IPA glass. No date.

L: Hazy yellow with a slight brown hue. Three finger head of off-white color, absolute rock solid retention, like some of the best head retention ever.

S: Aroma to me is a nice mixture of dank pine, and citrus, slight spicy note from the rye.

DEM HAZE BOI'z Gonna love this one.
Super fruity orange juice bomb. Tons of pineapple and mango flavors, juicy fruit bubble gum in the background, nice mouth feel and killer aroma. Smells like orange Julius. Glad there's no hype train on this one. No waiting in lines. But just as good as those other hyped up caned hazy beers.

Look: Hazy dark yellow/orange, very little head
Smell: Dole pineapple rings in juice, some ripe mango/jackfruit/Juicy Fruit gum
Taste: an IPA with pineapple and orange juice poured into it. Aftertaste is fruity, then piney and bitter with a hint of fruit still kicking around
Feel: smooth light/medium carbonation. It leaves my lips sticky.

I asked the nice man at the counter of the beer store for a juice bomb, and that's exactly what I got. This is the first beer I've ever had like this. I'd only ever had "west coast" style IPAs, and I wanted more of the juicy, tropical flavors. Oh boy, did I get some tropical flavors. This stuff tastes like half IPA, half smoothie. I wish it was a little bit more carbonated, but it's just a different style than what I'm used to.

I've been wanting to try a NE-style hazy juice bomb, and this delivered.


Starfish from Brouwerij West
Beer rating: 91 out of 100 with 61 ratings