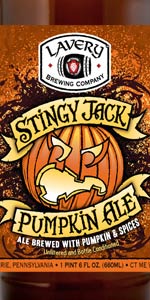 Notes: Named after the Irish legend of the Jack O Lantern. Brewed real pumpkins and subtle spicing to make sure you can enjoy more than 1 pint per session. A drier version of your standard Pumpkin ale, ours is not cloyingly sweet. A nice toasty/biscuity flavor from the American pale ale malt.
View: Beers | Place Reviews
Reviews: 20 | Ratings: 81 | Log in to view all ratings and sort
Reviews by Wowcoolman:

Great appearance- reddish amber with nice lacing. That's about all that stands out with this one. Malty aroma, but there is an unpleasant metallic aftertaste. Not much pumpkin and a bit thin in mouthfeel.

My first Lavery offering.Pours a slight hazed burnt orange with a thinner head atop.Pumpkin pie spice in the nose,a fair amount of clove and cinnamon.A lither feel wich takes away from the flavors a little.I like the flavors they are spiced but not cloying,cinnamon,clove,nutmeg,the mainstays of pumpkin pie stand out but again not overly big.A pretty darn good pumpkin ale,a better feel and this would be top notch.

I've had the Lavery beers at the Penn Fest this past summer, but this is my first purchased offering I'm always stuck at sticker shock. If they were available on draft for 4 to 5 bucks a pint I would have tried them all, but starting at 8 bucks for even their standard offerings seems weird to me. This was marked down to 6 so I could justify the dive into their bottled offerings. A really nice pumpkin ale, and I'm not a big fan of the style in general. This one comes off balanced with a nice amount of pumpkin gourdiness and spice offerings, with a warming alcohol level that fits for the beer. Appears a clouded orange tinted amber glow with a faint cream head, forms uneven scattered lacing on the sides of my nonic pint. Aroma warming pumpkin spiced tea, hints of cinnamon clove and pumpkin gourds leaving a vegetable imprint on the whole beer. Creamy pumpkin pie notes, with warming spice and festive holiday notes. Earthy vegetable pumpkin with a sweet biscuit malt tone. Not overly done in anyway this quite the excellent spiced pumpkin beer with real pumpkin and it makes it. Mouthfeel is medium bodied some might say the spices are too much but I feel it finishes balanced between sugary malts, dry spices, and vegetable earthy notes of pumpkin. Overall easy as hell to drink this beer when normally I can't finish a 12 ounce bottle of the standard pumpkin ale out there.

Taste: Real pumpkin flavor dominates, up front, with the breadiness and subtle pie spicing adding a nice dimension in the middle; very nicely balanced, with a minimum of brown sugar and molasses sweetness; the spices come on a bit stronger, after the swallow, with clove being dominant

Mouthfeel: Rather flabby, with a medium to full body and low carbonation

Overall: There is a lot to like in this year's Stingy Jack; a lot of natural pumpkin and nut flavor and a deft hand with the spices; I have had mouthfeel problems with some of the other Lavery beers (more as a result of overcarbonation, ironically) so if this one were just a bit crisper, it would really be in the top echelon for the style

Thanks, kbuzz, for the opportunity

22oz bottle into a pint glass.

Pours a clear copper, with ½ fingers of fizzy off-white head. This maintains some foamy edges, leaving back a cascade of spotty lacing. The aroma has a twang to it, with notes of pumpkin, citrus, toffee and light spices. This is very ripe and earthy feeling overall in the nose.

The taste is raw, vegetal pumpkin flavor, earthy bitter hops and then a malty backbone of sweet grains and some tangier caramel character. The finish is lingering ripe earth and some scattered spices. I’m actually getting a bit of pepper on the backend of this. The mouthfeel is medium bodied, with firmness on the tongue that turns into more of a smooth creaminess that spreads out.

This was just OK. The combination of pumpkin and hops put off a bit too much of a raw and earthy vibe that was brought out even more by the malts. I split this bottle and that was still too much for me.

Cheers to Goblinmunkey7 for sharing this beer

Appearance: A light brown with some orange highlights - pours with a very small, off-white head - cloudy, with some clarity around the edges that I typically associate with barrel-aged sour fruit beers... odd

This has a nice amount of real, fleshy pumpkin. Unfortunately, there is not much else remarkable here. Overall, it could use some balance and some more interesting malts. Not bad, maybe worth a try.

Pours a clean orange-ish to amber color with an off white head. In the aroma, cinnamon, nutmeg, and brown sugar. In the taste, cinnamon, nutmeg, and a dry fruitiness of pumpkin. A spice like bite and a medium bodied mouthfeel, with a dry cinnamon like spice in the aftertaste. A nice big spice but not overwhelming, very enjoyable.

Overall: One of the more unique takes on the pumpkin ale.

Incredibly dry for the style. Nice use of pumpkin. Falls a little short overall as the malts are so dry and offer little complimenting sweetness. Ends up drinking like pie crust with some pumpkin remainder.

Pours an extremely hazy orange-brown color. One finger of cream colored head following a medium pour. Moderate head retention, and the head has now settled to a thin and spotty layer after about 6 minutes.

Aroma is tamed a great deal from last year's alcohol bomb. It's not in your face, but the spices are definitely present. I'm also getting some actual pumpkin as well. Very nice.

Taste- A smooth blend of malts and spices up front. Just a touch of bitterness towards the middle. More spice and a smooth combination of pumpkin and malty goodness in the finish.

Medium bodied with a carbonation that falls somewhere between mild and moderate.

Morey's Bottom Line: I know that I've already said it, but the difference between 2010 and 2011 is huge. Lavery has created a balanced and drinkable pumpkin ale here. Not overly spiced, not overly hopped, just a super enjoyable fall brew.

Poured out of a 22oz bomber, this brew poured a very hazy brownish-amber color with a one finger cream colored head that has since settled to a thin layer covering the top of the beer. Minimal head retention.

The aroma is honestly dominated by alcohol. I get some spices, but they are hidden behind a wall of alcohol.

Taste is light on spices, but they are definitely there. Alcohol and malts are the most dominating, but it smooths out towards the end making for a surprisingly smooth finish.

One bomber is enough for me.

Morey's Bottom Line: My least favorite Pumpkin Ale of the night, and I'm several bottles in. It's a local beer and I want to support it, but it could honestly use a little tweeking.

Pours a clear copper color. Aroma of pumpkin pie spice, vanilla, and some malt body underneath. In the taste, nice and pumpkin like, vanilla is strong and roasted malt makes for a nice combination. Pumpkin, vanilla, and nutty, roasted malt. Even balance, and quite tasty. Medium bodied, smooth. Overall, a well made pumpkin ale that stands up to the other better examples of the style. Dig the roasted malt body.

Poured into a chalice (goblet) as suggested on the bottle.

The initial pour has absolutely no head. The brew is a deep, hazy burnt orange caramel color. This is a 750ml bottle, so I will let it warm a bit and rouse the sediment at the bottom a bit on my next pour. The second pour yielded a much dirtier brew, but again with virtually no head. The brew is now loaded with yeast sediment.

Smells of pumpkin, bread and caramel malts and spices.

Tastes predominantly of pumpkin and caramel malt with a dose of cinnamon, nutmeg and some clove.

The lack of any head on this brew made me wonder about the age of this one. Nevertheless, it was a pretty tasty pumpkin ale. Not overly spicy and highly sessionable.

Pours a hazy brownish color with a slight orange tint. Small head is off-white and retains as a lacing.

Tastes of spices like cinnamon and pepper followed with some pumpkin pie sweetness and a hint of vegetable bitterness.

Body is medium to thick with very mild carbonation.

Overall not a bad brew, but I've had a few other pumpkin ales I would take before this one. Still, nothing to turn your nose up at. If you have a craving for a pumpkin brew and can't get some of the premier offerings, this will hit the spot. Just a bit too coppery and bitter to be top tier.

Pours a copper tinted orange, muted head with little retention. Scent is all about the pumpkin with some notes of pumpkin seed, biscuity malt and a muted spice profile (mostly cinnamon). Taste is pumpkin forward, moderate notes of cinnamon and biscuity malt backbone, a hint at the ABVs towards the end. A bit light on carbonation, medium bodied. A decent brew, unique in its makeup, still some things could be adjusted.

Pours a cloudy burnt orange, with a quickly disappearing tan head.
Smells of Strong pumpkin with typical pumpkin pie type spices. But the real Strength of this brew is the Taste. Full bodied with good sweet smooth finish. Like pumpkin pie, a good dessert beer with a creamy body.

Appearance
Murky mahogany with caramel colored highlights. Half a finger of tan head is produced and rapidly dissipates. Much darker than your typical Pumpkin Ale.

Taste
A whole lot of pie crust, graham cracker, caramel and pumpkin meat. Brown sugar and light nuances of nutmeg throughout. A touch of allspice, clove and cinnamon as well as an earthy presence.


The Devil's Pumpkin from Lavery Brewing Company
Beer rating: 85 out of 100 with 81 ratings