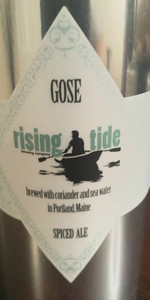 Hazy yellow with about a finger of bright white head. A little grass and tartness in the aroma; not too strong. Fruity flavor with a creamy mouthfeel. A little salt. Even less tartness than the smell. No bite or crispness. The carbonation does bring out a bit more flavor when sipped from the can rather than a glass, but still not a great example, imo.

Can. Pours a slightly turbid, honey . Skinny white head. Arches of lacing. Smells a little pukey. Tartness and cheese rind. Coriander sweetness. Lacto. Wheat. Salt. It uses seawater and it actually smells like the ocean. Flavor is wheaty, cheesy and sea watery. The finish is like a gulp of unexpected sea water while swimming. Mild coriander slice and sweetness. The nose, to me, was slightly offensive. The flavor (especially as it's temperature rises) is not as yucky. More body than its uber-light ABV. I am a fan of Rising Tide. Been to the brewery and such. This one grew on me ever-so-slightly. Still, it's initial baseline was not impressive. This style is gaining some steam and I will admit it's not my favorite but this one missed the mark.

Thanks to Tim for hooking me up with a can of this. Haven't gotten around to cracking it until now.

A - Poured into my Duvel tulip a slightly hazy straw hue with a thin one finger white head that fades to leave a very thin blanket.

A: Pours a cloudy straw yellow color with 2 fingers of head that slowly fades down to nothing

S: Wheat and coriander up front, with some salinity and light tartness in the back. Fruity and spicy notes stand out amongst the wheat. Solid

T: Starts off with a light tartness along with the fruity notes, light spice, and coriander. An underlying salinity throughout, though mostly prominent in the finish. Finishes with the salinity and hits of wheat

O: An extremely easy to drink gose with a nice balance of tartness, wheat, and salinity. A great summer brew

Best gose I've had in a long time. Not-too-anything, lower abv and pleasant tartness is very satisfying when compared to many other goses being made stateside.

Poured from 16 oz can into Nonic pint glass, purchased at the brewery.

Aggressive pour produced about two fingers worth of frothy head that quickly fell to a fluffy cap. The beer looks as it should - an unfiltered wheat that is slightly cloudy and a golden straw color.

The aroma is mild and bright. Definite spice notes of coriander, balanced by some lemony aroma, earthy yeast notes, kind of a sour wheat bread dough cuts through, and somehow it all seems very clean and refreshing. Maybe anticipating the salt, but it does put me in mind of clean, ocean air.

The taste was initially quite bready - the malt certainly shines through on the first sip. Then some earthy notes come through with a pleasant level of acidity, a little lemony characteristic, and moderate spiciness. The coriander (which was very apparent on the nose) is restrained on the tongue. Present, but more of s supporting character than the primary flavor. There is a definite metallic tang from the salt that lingers, buit not over the top.

Feel - I expected this to be just a bit lighter, but found it very refreshing in general. maybe a touch too heavy on the "lingering" aspects of the taste. It seems to waver between smooth and crisp - a little too much body to be really dry and crisp, but that is being very critical. Certainly refreshing.

I drank this beer on a very warm early winter day looking for a refresher and it hit the mark. It accurately represents the style without being heavy-handed in any particular aspect. This is certainly a beer I would drink when I can find it.

Pint on draft at Arcadia National Bar in Portland, Maine, along with some Burger Time and Ms. Pac Man.

Appearance: It's a hazy yellow with a short white head that hangs on for a while. Carbonation seems typical, but it's dark in here.

Aroma: Smells of coriander and spices, with a little bit of faint tartness - maybe bitter orange or something.

Taste: Hello there, salt. This beer hits the palate with a salty flavor and lots of coriander. That vaguely citrusy note is there, too. Rising Tide's website says this beer is made with local seawater and it's very believable. Wheat is also present.

Mouthfeel: Kind of light, which is not unexpected.

Overall: This beer walks the tightrope between having a nice, salty, wheaty taste and tasting like a gym bottle of coriander and sweat. It's on the right side of the aisle. Glad I found this at Arcadia - had been wanting try it at the brewery since hearing about RT trying out a gose.

Golden in color. Fairly clear in appearance. Closer to a traditional gose than say a Westbrook. Lots of wheat with a hint of salt and tartness. Refreshing.