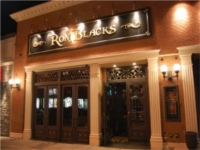 Reviewed by infi from New York

3.56/5  rDev -6.3%
vibe: 3.75 | quality: 4 | service: 3 | selection: 3.5
Arrived here for one of my good friend's 23rd birthday and wasn't expecting much, until I turned around and saw their tap lines. The atmosphere here was pretty lively, given it was a Saturday night, but there was enough people and space to make it comfortable and enjoyable. The lights were dimmed throughout the night and the air was mostly full of conversational chatter.

The quality is nice and clean at Ron Blacks.. very 19th century looking with wooden furnishings and copper embellishments. Very admirable. Service was quick and very attentive to the customers- they know their beers fairly well. I ordered a St. Bernardus 12 for myself, a Delirium Tremens for one friend and two Paulaner Hefe's for another two. All in proper glasses too! I was very delighted throughout the night. Prices were fairly reasonable: $8 for SB12, $10 for Tremens, and $5 for the hefe's. Their taplist also included some Captain Lawrence, Victory Prima Pils, DFH 90, SNPA and various others!

A serious gem in White Plains. If clubs/college bars aren't your thing, do yourself a favor, have a sit-down here and have a few!

Reviewed by Cameltoe from New York