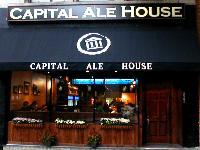 View: Place Reviews
Recent ratings and reviews. | Log in to view more ratings + sorting options.
3.83 by slasich from Pennsylvania on May 17, 2020

Rollin’ ‘round Richmond with the unusual suspects as we do. This, a return to the scene of a place I was at once before; being last year when we Ops folks came down for a 2 day VA work conference. Yes, the meet and greet was in that game room down and out back. A long day getting into town and the evening here a bit of a blur, but I recall heading out into the night for hot dogs at some point. Midway up or down the hill some, depends where you’ve coming from…

Long narrow place which narrows further to the rear. Angled wood laminate bar with a wide lip, panel base, & copper foot rail to the left starting halfway back; seating 15 on backed dark wooden chairs. Black subway tile barback wall with 76 taps on double high barbell rows and a standup trio off the bar over there (me, pointing). Growlers, wine, & glassware stacked or in rows on the counter tucked behind the taps, and more glassware shelved below. A flatscreen trio spaced along the bar overhang for the looking at. And a pair of triple door bottle & can coolers tucked just behind the front end of the bar (There are nearly 100 offerings there) with booze tiered alongside.

Black ceiling with ducts of the same up front, and a lower white drop ceiling to the rear and over the bar. Dark wood plank floors, and white walls with old Richmond beer prints & tins over wood panel framed lowers. Track lighting up front and in rows running to the rear up high over the bar & adjacent booths, and giant twisty drop filament bulb singles sitting lower over the booths.

7 mix & match tables in a raised space up front, 7 booths running the adjacent to the bar, and a ½ dozen more to the rear, plus a strange trapezoid table forward the bar where it awkwardly fits. The attached ‘Richmond Music Hall’ side room holds a stage area to the rear (didn’t know that was there) and 9 tables up front easily removed when performers perform. My notes indicate that there’s also a rear room that holds 10 tables banquet room style, but I just can’t see it in my head. Display cases of area brewerania, too? And down the rabbit hole (that which are stairs) to the game room. I went and saw the sights. It’s a smaller quieter bar; I suppose because you have to know it’s there. Damn, there’s another 2 dozen taps down here. A couple of guys chatting up the bartender, a few dart boards and a pool table. And through to some outside space, roughly a dozen and a half small tables amidst the giant tree and fountain. Almost makes you forget you’re in the middle of a city. But it’s humid as shit out there right now, so, back to the bar.

So, there are what, 79 taps up here and another 24 downstairs. Now I’m no mathsman but they’ve got about 100 taps. 53 of them were state of Virginia offerings spanning upwards of 3 dozen breweries and cideries, which is pretty badass. The tap list is carved out by, I was going to say ‘style descriptors’ but I think now it’s more ‘flavor profiles’ (malty & sweet, sour & funky, crisp & smooth, sharp & hoppy, bold & roasty), if that makes any sense. Brewery, beer, origin, ABV, style, serving size, & price by glass and growler are listed. I sampled a few things and settled on the Evolution DelMarVa Pure Pils, which was just lovely, so I had another.

Oh, and food for the win! Lots of stuff on the menu, could’ve gone this way or that, but went with the Sesame Ahi Tuna Salad. Witz had the giant pretzel, Davo the pierogis & mussels (no, not together), and Ben the Capital Club. Salad was okay, seemed a little lacking someway somehow, but I still housed it.

It’s a chain, better than most of this ilk. Really impressive state of Virginia representation here. When in Richmond…

Went on a Monday Burger Night. Service at bar was nothing exceptional as was the burger. Large draft selection but the person next to me knew more about the selections than those behind the bar. Overall down right mediocre

Ok - I had their black n blue bacon burger paired with a Port City Porter (Alexandria, Va.) at about 9pm on a Saturday night. Thought I died and went to Heaven...!! Both the beer and the burger were off the hook - nothing short of fabulous!!

I really enjoyed this place. The draft list is excellent. You can get crowlers/growlers to go. You can even buy bottles to go or consume on site. I sat at the bar with a good view of the TVs/bowl games. The service at the bar was excellent. The bartender provided some suggestions on food. The food was really good too, especially for bar food. Like I said, the draft list was so good. As a visitor to Richmond, they had a good choice of local VA breweries. I recommend giving this place a shot next time you are in Richmond. I know I'll be going back!

Fantastic place for dinner & a few beers. We hosted a company Christmas party here and it was a huge hit.
The place has a nice vibe, inviting and friendly atmosphere, tastefully decorated bar area and facilities. The servers are very knowledgeable and friendly, and actually give good recommendations. Our service was very good, given that this was on a Friday night with a large group! No complaints there. Beer selection in my opinion is incredible, I mean I don't get the nit-picky reviewers complaining about lack of selection, with over 150 to pick from, how many MORE beers do you need to have to be impressed?? Geez. It's Richmond, not New York. The food was very good, I was pleasantly surprised at how good it actually was. Being an Ale House I half expected the quality to be mediocre at best, but was very happy with how good it really was.
Our entire group thoroughly enjoyed the evening. They do a superb job with corporate parties, I recommend this if you have the chance.

The vibe is pretty typical of many other places you'd find in any east coast city, but it's nice. Seems like a pretty chill place to have a drink and a bite to eat. Great quality, excellent service, and fantastic selection of beers on tap and bottled. The food is good too, it's not everywhere you can enjoy pierogi with your beer. I'd definitely come back here the next time I found myself in downtown Richmond.

I use to love this place a few years ago. Now that Richmond has many many craft bar options this place has failed to evolve. The music hall part is nice, just not a lot of bands you really want to see come. Lots of taps but normally the same beers on tap that every other bar in Richmond has. Turn over on the beers also seems hit or miss. Price on the beer has typical bar mark up, you get a discount for buying bottles to go however. Food is ok. Service is hit or miss.

10 years ago I'd probably have given this place 5/5 but plenty of spots like this exist now.

Beer selection wins out over everything else here. The bottle list is beyond extensive and there are plenty of fantastic options on tap. They have high end favorites, great local/regional options and they put plenty of the less than easy to come by items on the menu, stuff like 120 pops up regularly. Prices are fair.

It feels like a typical bar - no frills in a good way, but nothing to write home about.

Food to me is a bit of a drawback - it's fine but the quality could step up just a touch. Sandwiches fries and all are fine but nothing special.

It is a great local chain and one to hit up if you're looking for a place to kill some time before walking to The National or something.

Updated: They must not turn over draft quickly or have exceedingly long draft lines. I had 2 pours and both were flat, and I mean dead flat. Tasted fine otherwise but that's disappointing. If you can't get around long lines, that's fine, but bleed the tap for a minute on the first pour if it's been a while. Most everything else is the same as before.

Great local brews, all your faves, plus some gems.

Quality of the beer and food was good. There were a lot of top notch world classics here to go with solid regional beers.

Service was solid, not too tough with a small crowd to deal with.

Selection was pretty top notch as there were 40-60 draft brews to pick from and mayb 100 bottle selections.

Food was very good, I had the gyro burger which was unique but very good and Da Boss had the fish tacos that were solid.

Capital Ale has a great selection and variety of beers at most places. The food is very good as well. The atmosphere can be great and some places even have live music. Sounds perfect right? Well..not so fast. My biggest gripe with this chain has always been service. I use to work across the street from the one in downtown Richmond. Clients wanted to go to lunch there. We could never get in and out in under 90 minutes and it was usually a lot closer to 2 hours. Service at night wasn't much better. The bar can be extremely crowded and the beertenders can get overwhelmed. Most are very knowledgeable. They have a 1/2 price growler night. Well worth trying but bring your patience when you go.