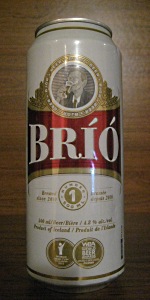 Notes: This beer is produced by Borg Brugghús exclusively for "Ölstofa Kormáks og Skjaldar" in downtown Reykjavík.
View: Beers
Reviews: 11 | Ratings: 44 | Log in to view all ratings and sort

L: Pale golden yellow with a small creamy white head and no lacing.

S: Strong floral notes with hints of lemon and some grain.

A solid but average pils

Amazing surprise. Good citrus aroma, excellent taste. Beer at the same time light and intense. A good option if you want something light like a pilsener and aromatic like an IPA.

A- Pours a very pale golden topped with a 1/2 finger white head that doesn't stick around too long. Similar to a BMC lager.

M- A lot bigger body than I was expecting: Medium body and moderate-high carbonation. Not high enough to come off as aggressive. Nice and creamy feel.

O- As the saying goes, looks can be deceiving... From the appearance, this beer looks like an average lager that could be strung in with the likes of Coors, Budweiser, etc. but dig deeper and you'll find a brew thats packed with good flavour and a creamy mouthfeel

A- Clear solid gold pale pour from the bottle to a tulip glass. Creamy white cap forms up to about one finger with decent retention. Plenty of lace webs coat much of the glass.

S- Clean with some spicy and herbal hops. A touch of crackery grains in the backdrop.

T- Much like the nose very clean. Cracker and bready malts lead to herbal, spicy and floral hops. Lager yeast is certainly there but as mentioned it is crisp and not of nuisance.

MF- Creamy and foamy with a substantial medium body; not thin at all. Very high end zesty crisp carbonation.

A very clean and well made Pils with the herbal spicy hops dominant above a light base of bready and crackery grains.

33cl bottle, served in a Gull tulip glass at Icelandic Fish and Chips in Reykjavik, Iceland.

Pours a lighter caramel golden body, one finger white head, good carbonation, plenty of lacing. Smells of light biscuit and bread, a bit of cereal, earthy and floral hop aromas. Flavour is similar, a bit light on the bready sweetness, a bit of cereal as on the nose, and noble hop aromas. It's missing a bit of the breadiness that I have come to really like from the pilsner style, and seems to be a bit lacking in flavour, like American adjunct lagers, although it has more body and a bit more complexity to it than Miller Lite. Mouthfeel is on the lighter side, good carbonation, refreshingly drinkable for a summer day. I won't begrudge people who enjoy this style of beer, as there is a time and place for it.

Wasn't expecting anything special, but this Icelandic brew surprised me. Huge, whipped egg white like head on a yellow/gold body. Biscuity, crackery malts, grassy hops... the regular Pilsner attributes. Then there's a kiwi-like hoppiness and a beautiful, velvety mouthfeel. One of the best of it's style that I've had, at least.

I wasn't expecting much from this beer, but was pleasantly surprised. Full disclosure here: part of that is probably some residual sentimentality, given how much I loved Iceland when I visited it. And part of it is that Icelandic beer was, generally, not very good (owing perhaps to the fact that full-strength beer was illegal in that country until 1989).

Colour is a bit of a sickly gold, but it's actually topped by a decent amount of foamy head, and rings the glass nicely. Smell is grassy, peppery, herbal, cracker-y. Taste is crackery malt with some light peppery notes, light grass and herbal, floral flavours. Slightly creamy. The body seems, on first instinct, like it's going to be overcarbonated, but is actually fairly restrained and enjoyable. This one is, surprisingly, a hit for me--there are better examples of the German pils out there, but you can be sure that none of them come from Iceland, and this one seems to strike a solid balance between what appears to be a taste for light, mild beer in the country and, on the other hand, respecting a particular style of beer.

a-hazy golden color
s-sweet floral smell is pronounced
t-tastes like it smells, a pleasant lingering sweet floral taste, slightly bitter yet refreshing finish
m-creamy feel that coats your mouth (lacing present in glass as well)
o-extremely surprised, this beer is outstanding, one of the best lagers I have ever tasted

500ml can. This appears to be brewed (or perhaps just packaged) by the Ölgerðin Egill Skallagrímsson brewery, in conjunction with the Borg Brugghús.

This beer pours a clear, pale golden yellow colour, with four fingers of puffy, melting marshmallow head, which leaves some sudsy recreations of mesa-profile lace around the glass as it quickly wafts away.

The carbonation is a bit peppy up front, but settles to a dull frothiness soon enough, the body a sturdy medium weight for the style, and generally smooth, with a small nod to creaminess. It finishes mostly dry, the edgy grainy malt, muddled noble hops, and subtle petrol essence carrying the day.

Not a bad attempt at a venerable German Pils - and it mostly works, nothing really seeming off or askew, other than a sense of isolation, ennui, and pathos. Some of which work, and others just have no place in beer-making. Anyways, drinkable enough, I suppose, especially if you don't sit and pontificate too much about it.