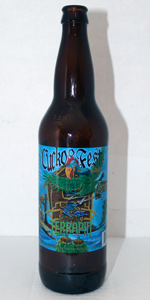 Notes: Brewed with all German malts for a traditional taste and real Blue Ridge Mountain grits for a Southern Twist; CuckooFest Festbier will put the heehaw back in your yodel.
View: Beers | Place Reviews
Reviews: 6 | Ratings: 30 | Log in to view all ratings and sort
Reviews by jnjander:

Trust me, there's little about summer that's to be criticized. But with the lighter, fruitier, hoppier fare of the warmer months, there's something simply awakening about the malty beers of fall that really get me going! Perhaps I'm cuckoo for CuckooFest!

Terrapin's fall festival ale is one deeply set in Germanic traditions as its juicy malt aromas and elegant grain character pull from its washed bronze body beneath. With a faint floral whimsy floating above the rim, its taste is sweet with an off-caramel, mild honey blend.

Over the middle, its sweetness recedes and its delicate grain character pulls forth with the delightful but earthy taste of cashew and pecan skin. With its floral sweetness fading, a balancing hop spice presents with light fragrant woods, perhaps of beech or lemony sassafras.

Creamy-dry in finish, the beer develops into a beautiful drinking session that's equipped with a medium body and crisp, clean closure. Perhaps a bit more "American-ized" with a simplistic taste and texture, the beer remains remarkably true to those Bavarian roots.

Looks just as it should, and the head fully coats the glass with a thin layer of foam with each tip of the glass.

Aroma: Ever so slightly more hoppy than malty, with a hint of toffee.

Flavor: true to style, for the most part, yet the hops and malts each stand out on their own and the interplay of flavors makes this more interesting than usual for the session style beer. A hint of grits too? Hops dominate the finish but the malts come to the fore in the aftertaste.

Feel: crisp and lively with a near medium body and a touch of dryness in the finish.

O: an above average version of the style, and the best beer made with grits I've ever had. Started right from the refrigerator but this improved with some warming.

"What time is it!? Time for CuckooFest Southern Style Fresbier! Brewed with all German malts for a traditional taste, and real Blue Ridge Mountain grits for a Southern twist, CuckooFest Festbier will put the yeehaw back in your yodel. Have one with your favorite plate of wurst, or with some down home fried chicken." Brewed in the style of a German Oktoberfest, available as a one-time limited release, available in 22 oz. bottles and limited draft.

Poured from a 22 oz. bottle to a Terrapin pint glass. Served above 51 degrees Fahrenheit.

(Smell) Smells much like an Oktoberfest should, with biscuity and bready german malts, a light syrupy caramel malt sweetness, a pinch of earthy grain and a pale nutty robustness. The aroma is mildly sweet but easygoing. Perceived bitterness is low with a mild floral hop aroma and some grain bitterness chiming in. No real aromatic character comes from the addition of grits, a close-to-odorless ingredient on its own. Potency is medium. 3.75

(Taste) The taste is very much like the aroma, highly drinkable German bread malt base with a soft touch of biscuit grain drizzled with toasted caramel syrup and garnished with a pale nuttiness of unroasted almond. Finishes clean, lightly acidic. It's possible that some corn character from those grits was slipped in there but it's difficult to tell as they are very much a silent ingredient in this beer. 3.75

(Mouthfeel) The texture is slick, lightly chewy, softly dry. Carbonation generates a soft frothiness for a smooth, fluffy mouthfeel. Body is medium for the style, medium overall. Balance is slightly sweet over earthy bitter. Alcohol presence is low, and there are no noted off characters. 3.75

(Overall) If I wasn't informed that there were grits used in this beer, I never would have been able to tell. From about all perspectives, this drinks and tastes as easy as an Oktoberfest should, very clean and flavorful with a mild sweetness and a mellow earthy robustness. To that extent, I can't find anything glaring to criticize. It's worth trying but I wouldn't go out of your way to locate a bottle, as I only was able to locate a bottle at a store in Athens, it hasn't yet trickled out as far as Atlanta. 3.75

S: I get some bubblegum, sweet malts, pretty decent amount of fragrance

T: I get a spiciness upfront, maybe clove or something like that, sweet malts come in with a caramel taste, these really combine well

M: Medium feel, carbonated well, has a slight crispness characteristic of a lager but not as much as most adjunct lagers.

O: I really like this. I don't get any of the grits it speaks of but definitely a great beer. Best Oktoberfest I've had.