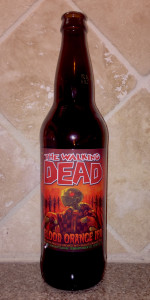 Notes: Terrapin Beer Company and The Walking Dead have teamed up to brew the official beer of the undead. With killer blood orange flavor, and a horrific amount of hops, this bloodthirsty Red IPA will have you prepared for the upcoming Zombie Apocalypse.
View: Beers | Place Reviews
Reviews: 75 | Ratings: 297 | Log in to view all ratings and sort
Reviews by OldManMetal:

This "Blood Orange IPA" pours to a giant, pillowy peach head on a very slightly hazy, effervescent dark ruby brown body; head retention is modest and lacing is good, consisting of rotten bands and sheets. The nose is medium-big, leading with toasted malt notes that are quickly overcome by a very nice blend of mango, grapefruit and blood orange with cardamom-like sweet/spicy backnotes, hints of perfumey florals and modest alcohol overtones. Up front, the palate follows the nose precisely: a very distinctive and beer-defining set of fruit notes that are most reminiscent of cherry Sweet Tarts and quite honestly become a bit off-putting by the end of the beer. Mid-palate, the malt emerges to challenge the hops, showing as modest bittersweet nutty notes and a prominent caramelish bready foundation; perceived bitterness retreats a bit to modest. The finish is a fair hit of nutty caramel and Sweet Tarts, followed by the onset of a modest, slightly grassy pine bitterness that lasts for awhile. Retrogustative olfaction is redolent of Sweet Tarts and caramel. Mouthfeel is commensurate with the medium body, and the texture is slightly creamy and medium-peppery from the well-expressed carbonation. (12 oz can, 33 days after pkg)

IPA? Not by today's standards ... While I love the marketing collab with the show it seems marketing got the best of calling it an IPA and riding on the IPA citrus bandwagon. Seems toned down in hops for the usual Terrapin IPA (hoppy beer). Tastes like a hoppy citrus peel flavors red ale ... to be that IPA there would have to be a bit more of a push in bitterness and flavor.

Good drinking? I guess, just not much of an IPA and the flavoring can't be an excuse for dialing the hops back.

Received in a trade. Reviewed while watching this week's The Walking Dead (Season 6 Episode 3) of course!

A - Poured into my Duvel tulip a crystal clear blood red ruby hue with a thin half finger off white head that faded to leave thin wisps and light lacing.

S - Aromas of malts, sweet malts, caramel, not much hops, maybe some faint citrus. Doesn't really smell like an IPA.

T - Taste is similar to the nose. Fair amount of caramel and malts, little bit of orange pith and peel. The finish has a decent amount of bitterness. Still, rather sweet and malty.

M - Mouthfeel is lightly carbonated, a bit on the sticky side.

O - Overall, I knew going into it that this was going to be a gimmick beer pandering to Walking Dead fans. That being said, I certainly expected it to be better than this. Especially from Terrapin.

This beer proved to be a bad omen for the episode as Glenn was apparently killed off. Wonderful. Damn this beer.

S: Break-light red body that supports a bone colored, spongy, yeasty head full of pitting and rolling waves. Tiny, tiny bubbles rise from the base of the glass. Lacing appears as consistent rings with small webs connecting each layer.

A: Pleasant bright orange citrus, slight pine, and gentle malt all come together to create an aroma far less scary than the walking dead. Another sniff yields a bit of mango.

T: The pine and orange greet the tongue immediately, followed by a soft, toasted bread crust and the spicy, tangy rye twinge ever-present in red IPAs. It’s got a bitter finish, the citrus and mango making a second appearance, just like when you think you killed that zombie, but didn’t see it die.

F: Slick, oily. Medium bodied. It sticks around on the palate for a bit after you swallow.

O: Enjoyable to drink, no true flaws, but not stand-out either (Try Sixpoint’s Righteous or Ninkasi’s Devil Went Down to Oregon as a great example). Beer isn’t exactly a gimmick, just close to it. 22 ounces of this 6.7% abv beer might make you a little slow, but good thing we’re dealing with the “walking dead” and not Usain Bolt’s reanimated corpse.

A very good IPA! And you can actually taste the blood oranges over the hops. Very drinkable and perfect for your zombie / Walking Dead viewing parties. I did find the mouthfeel to be a bit heavier than I would have liked, but I would definitely drink this again.

It is a clear, very deep ruby red color. There is a cream/light tan colored soapy head that is pretty thick and leaves a bit of lacing. So far so good.

It smells like orange rind, bready caramel malts, and some leafy floral hops.

There is a zesty, sour orange and peel flavor along with some bitter, resinous pine that all gets drowned out by a solid backdrop of sweet, toasted bready grains that linger.

A soild medium body. A bit pithy with a definite spicy rye like bite.

Pretty much a hoppy red. Much like the show after season 2, nothing worth revisiting.

Super hoppy, not really getting orange.

Bomber. Pours ruby amber, finger head, rings of lace. Mild aroma, subtle citrus. The taste is a good balance of bready malts, citrus peel, tartness from the blood oranges. Some grassy ness and pepper in the dry finish. Mouthfeel is on the thin side, very clean taste. Overall tasty brew, nice twist with the blood oranges.

T: Sweet malts, caramel, the orange that is advertised comes in slightly in the middle of the taste then the pine hops ends the taste to balance the sweet malt flavor

O: Typical malty IPA from Terrapin which is just fine with me, I tend to enjoy a bit more malt than most. The orange doesnt seem to meld well with the supper caramelly malts. Decent beer just not a homerun.

The Walking Dead Blood Orange IPA from Terrapin Beer Company
Beer rating: 84 out of 100 with 297 ratings