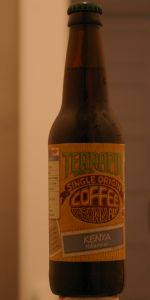 Pours a clear, reddish amber-brown color with a finger-and-half of frothy-looking tan head that leaves sheets of lacing.

Nice milk chocolate aroma with cream, cherry and wood behind.

Sweet tasting, with the same chocolatey, creamed coffee character with cherry and wood notes behind. Tons of coffee flavor without being bitter or acerbic. Like the perfect breakfast blend.

Relatively light bodied for a coffee beer these days, but on point for the style, with just slightly higher carbonation than I prefer.

I had last year's four-pack and thought it was fun, but this is definitely one of the better non-BBA coffee beers I've had. Delicious.

Was excited to find this on the shelf at a random shop. Love the brewery love darker spectrum of beers. But this beer was just odd. It tasted like it should’ve been thicker, darker. At least a porter or preferably a stout. Long story short good drink, could’ve been a WAYYYY better one though.

I found it hard to suppress my excitement when I recently saw this series available as single bottles at the FGBS! I am a retired U.S. Navy sailor who thrives on coffee and the combination of coffee & beer really trips my trigger. I am looking forward to an upcoming purchase from www.navyjoe.coffee of both JP-5 (300x of standard caffeine) & Battle Stations (darkest roast available) to really jump-start my mornings!

I think (hope) that we are moving into my territorial wheelhouse with this beer. The previous two had descriptors which suggested that I should drink them first, although, in retrospect in the reverse order. Once more, a Pop! of the cap signaled that the game was afoot. My anxious, jittery pour brought forth two-plus fingers of dense, foamy, light-tan head that hung around long enough for me to get my act together before leaving more lacing for me to deal with in its wake. Color was Coppery-Brown (SRM = > 17, < 22) with NE-quality clarity & deep amber highlights. Nose had the familiar roastiness of coffee, but not precisely. It was coffee, but it was African coffee. I drank it in Djibouti, Egypt and Kenya and it evokes memories of very different coffee than what South America produces. I cannot quantify it precisely, but it has a bitterness that is unlike any other. The label mentioned "tart" & I will buy that. It is probably due to the terroir of the growing region, but I promise you that I have not had anything like African coffee before or since. Mouthfeel was medium-to-full, not quite achieving creaminess. Marzipan = almonds. The taste was a tart/bitter almond flavor & my love of mystery & detective fiction screams one thing - cyanide! No worries. It was not THAT pronounced, but where I cannot generally register diacetyl, I do get bitter almonds from cyanide. I have been in a lot of labs over the years for various reasons and they say that I could be a canary when they are working with cyanide. Again, it was not as tart/bitter as that, but now we were beginning to move into a familiar realm of coffee. This almost made me want to get some North African coffee, but it just isn't quite my bag. Finish was semi-dry, slightly tart/bitter, but no so over-the top to make it totally dry. I think that this was the best of the lot, thus far, but that is just MHO. As far as an American Brown Ale is concerned, this site's description is so broad & all-encompassing that it is almost impossible to dun any iteration of it. Take that FWIW. It just makes it difficult to quantify.

Brewers are always on the search for the perfect spice to balance the sweetness in beer. Whether hops, herbs, spices or seasoning are used, each brewer takes pride in each spice as it's likely going to give a beer its identity, its thumbprint, its own unique signature that no other beer has. And for the Terrapin team, their latest series of brown ale employs unique coffee varietals for just that specific taste.

Kenya's Ndaroini coffee bean takes comfort in a delicate and nutty almonds with hints of an acidic twang- a perfect kickstart to an envelope of brown ale. Swirling with a creamy off white foam, the medium hued brown beer is light in its haze as the taste of natural caramel, toffee and chocolate simmer on the tip of the tongue.

As the coffee comes to life on the middle palate, the caramel and toffee maltiness of the beer begins to fade and the true nature of coffee shows its silky marzipan smoothness and hint of roasted pecan. A playful tartness of lime and red grape flavor mingle with a woodsy, sprucy hop bitterness, the balance is even and earthy.

The coffee has the softness of cold pressed technique while the ale is softly biscuit-like and molten on the finish. Medium bodied and standing slightly on the malty sweet side of balance, the coffee trails with the tartness of redcurrant with gently rolling almond on the finish.

12oz bottle poured into a snifter. This is the third beer that I've tried in the next Terrapin single origin coffee series. The first series was with coffee stouts featuring coffee from distinct origins around the world. The second series that this beer is part of is four different coffee brown ales.

Pours a dark brown color with light tan head. The tasting notes on the bottle is marzipan, slightly tart. The nose and taste are dominated by the sweet caramel malts, brown sugar and coffee. The taste also features a nice lingering burnt sugar sweetness with some roastiness from the coffee in the finish.

A: Light chestnut with short-lived beige head which gives away to splotchy lacing.

O: A delicious coffee brown ale that emphasizes nutty aromas and flavors over raw coffee in another interesting beer from Terrapin's Single Origin Coffee Brown series. Definitely a rewarding 4-multipack so far, one left to go!

Overall: another one in this series worth seeking out.

Pours a nice amber hue with nice clarity and a quickly dying head.

Aroma is light, some coffee, some nutty malty notes, maybe a tiny bit of smoke.

The flavor has a neutral nutty malt base and there are light coffee flavors. A bit watery, there are mineral and bitter flavors that one might assume are from the coffee. Light in flavor though.

Lighter bodied with a watery finish and some nutty, mineral laden notes.

Overall, not really all that exciting here. It seems that two of these single origin series beers had coffee flavors strong enough to make up for the weak base and two did not. A stout or more robust nut brown recipe would have carried the coffee better than these simple brown ales. Still interesting to see what the different coffees did, but the overall effect on the base was minimal at best. Perhaps a better recipe or more of the coffee would have improved it.

none of these brown ales were as good as they should have been, and the four pack was a major letdown, especially after such a wonderful experience with the single origin stouts last time around. this one was easily my favorite of the four through because the coffee was the most distinct and forward, it came through the base beer more than the others, but even this should have been better. i cant believe the chose a sugary monotone brown ale as the base, really annoying! anyway, this has a ton of roast and dark chocolate notes to it, deeper and earthier than even the chocolate malt in the brown, and the coffee is there from beginning to end of each sip, deeper penetration and more durability than the other three seemed to have. less of the sweet dried fruitiness the others had, subtle wood and whiskey notes to this one, and more bitterness too, enough to cut the sugary nature of the base beer pretty well. in the end this one was the best, a cup of coffee id like to have for sure, but all of these brown ales lacked the depth of the stout, and they all werent quite as coffee driven. its a shame.

Pours a brownish copper with less than a finger of head. The nose is bready but I am not getting much coffee. The coffee comes out in the flavor profile and peaks on the fi wish with some nice roasted bitterness.

My favorite of the four 2017 Terrapin coffee brown ales. Kenyan coffees are my favorite coffees and I was really looking forward to trying this one. It has some of typical acidity associated with Kenyan coffees with imparts an very faint tartness. This is paired with a nutty sweetness.