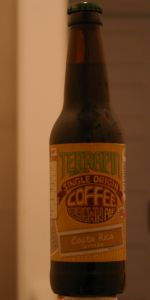 Light brown, relatively clear, with a strong reddish hue and a half finger of tan head that quickly dissipates into a crown.

Pretty similar taste. Perhaps the most light bodied of the six I've had from these series to date. Strong carbonation.

Another very tasty one showcasing the coffee qualities with much else getting in the way. Best-by of 6/17/17.

I found it hard to suppress my excitement when I recently saw this series available as single bottles at the FGBS! I am a retired U.S. Navy sailor who thrives on coffee and the combination of coffee & beer really trips my trigger. I am looking forward to an upcoming purchase from www.navyjoe.coffee of both JP-5 (300x of standard caffeine) & Battle Stations (darkest roast available) to really jump-start my mornings!

I was less-than-enthused by the previous beer in this series that I reviewed (Ecuador), but I did not expect it to be among my faves. I have to admit that the idea of milk chocolate & cherries is not terribly appealing, either, but I will not know until I Pop! the cap. I gave this beer an equally heavy-handed pour as I gave to Ecuador & once more, I got two-plus fingers of dense, foamy, light-tan head with modest retention. Color was Dark Brown to Very Dark Brown (SRM = > 27, < 34) with NE-quality & deep-amber highlights. The nose was redolent with cherries and I would never have identified it as having anything to do with coffee. This was quite intriguing! Mouthfeel seemed a tad on the thin side, not watery, but less than what I noted with Ecuador. The taste was spot-on milk chocolate & sweet (not sour) cherries! OMFG! What can I say? I was flabbergasted. These kinds of flavors, in beer, from coffee?!? Wow. It would not make me happy to have this from my coffee cup, but from a glass of beer, it was unique. Finish was sweet, no question, more towards a dessert beer than anything else. Loads of chocolate lingered after the swallow with the cherry becoming a pleasant afterthought. If you are trying this horizontal at home, this one might be the one with which to start.

Brewers are always on the search for the perfect spice to balance the sweetness in beer. Whether hops, herbs, spices or seasoning are used, each brewer takes pride in each spice as it's likely going to give a beer its identity, its thumbprint, its own unique signature that no other beer has. And for the Terrapin team, their latest series of brown ale employs unique coffee varietals for just that specific taste.

Costa Rica's Tarrazu coffee bean takes comfort in a rich chocolate aromas with hints of citrus and stone fruit- a perfect kickstart to an envelope of brown ale. Swirling with a creamy off white foam, the medium hued brown beer is light in its haze as the taste of caramel, toffee and chocolate simmer on the tip of the tongue.

As the coffee comes to life on the middle palate, the caramel and toffee maltiness of the beer begins to fade and the true nature of coffee shows its earthy milk chocolate flavors with hints of vanilla and cream. As a kiss of grapefruit and cherry mingle with a woodsy, sprucy hop bitterness, the balance is even and earthy.

The coffee has the softness of cold pressed technique while the ale is softly biscuit-like and molten on the finish. Medium bodied and standing slightly on the malty sweet side of balance, the coffee trails with a linger of chocolate and black cherry.

12oz bottle poured into a snifter. This is the fourth and final beer that I've tried in the next Terrapin single origin coffee series. The first series was with coffee stouts featuring coffee from distinct origins around the world. The second series that this beer is part of is four different coffee brown ales.

Pours a dark brown color with light tan head. The tasting notes on the bottle is milk chocolate, cherries. The nose definitely features tart cherries and chocolate from the Costa Rican coffee varietal. The taste has a touch of tartness/acidy up front with some roastiness from the coffee in the finish.

Pours a light brown color with a sudsy beige head.

The taste is of a moderate roast coffee with slight chocolate notes. A bit woody with caramel sweetness. The base beer has a light toast note, fairly light for a brown ale.

The feel is light with tingly carbonation. Sweet on the palate with some coffee bitterness. A bit of a lemony dryness.

The base beer is boring but it does have nice coffee notes.

A: Light chestnut brown, clear, with 1/2-finger beige head that falls away quickly and leaves no lacing.

T: Big bold coffee flavor with a solid shot of dark chocolate and cocoa powder that fades to an earthy, slightly minerally finish that helps establish a dry feel. I am not getting any of the stone fruit others are getting, but just a subtle sweetness in the finish. Bitterness is moderate and I don't detect any yeast ester character.

M: Smooth yet reasonably light feel with higher than average carbonation that helps with the dry finish along with the mineral note described above.

12 oz bottle in a Belgian snifter.

Appearance: With a fairly vigorous pour, the head rose only about .8 cm but did cover the top of the body and spotty lacing was left on the glass. A partial head hung on for a good while. The body is clear red-brown.

Pours amber and with nice clarity. Little head nor lace on this one.

Some mocha coffee and nutty brown malts in the nose.

The taste has a nutty, cocoa like fullness from the malts and coffee. Fuller flavor than the previous in the series. Nice cocoa and even a hint of vanilla as it warms.

It's a light bodied ale with a good level of carbonation, finishing with lingering coffee flavor.

Overall, a decent blend of coffee and a brown ale.

after absolutely loving the single origin stout series they did, we all had enormously high hopes for these beers, but the brown ale thats the base of them just doesnt seem all that good, and the coffee seems less heavy handed in the beers than it did in the stout, so nuance isnt quite as easy to pick up on, this was the first of the four we cracked, and for me it was the lightest. the coffee has some cocoa to it that works with the somewhat one dimensional base brown, but there is a lot of sweetness here too, toffee and molasses and its interfering with my coffee experience quite a lot, here more than others, this coffee seems delicate enough to be susceptible to that. some raisin dried fruitiness to it too, and the roast of course, which addss some bitterness thats not there in the malt. its weird though, all of these tasted sort of past their prime, but they were bottled on june 17th, so they shouldnt have fallen off like that already. even the coffee tastes a little oxidized, weird. i wish they would have stuck with the stout for this series or come up with a better brown ale as a base for the coffee, these werent even close to as good as the stouts, and we didnt quite get to nerd out on the coffee differences the way we had hoped with this four pack...