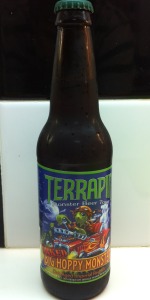 Poured this one into a tulop glass, it has a reddish color body with a very small tan head to it. The smell has some vanilla coming through with some oak also, i really don't get much else from it. The taste has a big flavor of malt up front with some vanilla and oak to it. I also detect some hops on the back of the tongue. I think it is a very boozy, but has a good mouth feel to it. Overall i like this but i couldn't drink it on a normal basis.

A: poured from a 12 oz bottle into a pint glass, red brown with a short off white head that dissipates leaving little lacing, hazy

O: the oak taste is strong, so are dark stone fruit flavors

A- Pours a brown but when held up to light you can see the reddish hue of this beer. Has a light tan head that dissipates after awhile.
S- Oak,Hops, and some caramel malts
T- Caramal malts with a nice oak background
M- Thin with solid carbonation
O- Theres a lot going on here but its well balanced and not over powering in any 1 area.

Smell:
A heavy malt presence but overshadowed by an even stronger oak smell as well as alcohol. However, the alcohol smell is a bit overpowering and does not really mix well with the malt. The hops do appear in the smell in a pine form but does not mix well with the alcohol. The end result is that the alcohol and pine smell a bit like a pine scented antiseptic and ruins the oak/pine combination, which is pretty nice. After waiting a while, the key to getting the full flavor is to drink the beer warmer or at room temperature in order to allow the hops to air out a little bit. However, even after the hops emerge from the bitter cold, the smell is still overpowered by the malts and oak.

Taste:
The amber ale tastes fairly weird. The oak taste seems to dominate everything including the malts and hops. However, the alcohol is the only taste that does not get covered by the oak. The hop presence comes out in the aftertaste and not at the front of the drink. The malts barely come out in the taste. After warming a bit, the hop presence became known. However, even after the beer warms up, the hops are still dominated by the oak and malt tastes.

Overall:
I can see what Terrapin wanted to do with this beer but feel that they fell short. The oak tastes too fake and overpowering to really work with an amber ale and the alcohol taste just does not mix with a heavy malt beer.