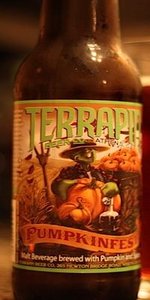 Notes: Although this is a pumpkin beer, it is a lager and therefore doesn't belong in the pumpkin ale category. Originally a Side Project, now a Fall seasonal in six-packs.
View: Beers | Place Reviews
Reviews: 266 | Ratings: 924 | Log in to view all ratings and sort
Reviews by JohnnyK:

T: Spices on front end, pumpkin comes in, maltiness of an octoberfest comes in, spicy aftertaste

O: Probably one of my favorite pumpkin beers. To me it is the perfect beer for fall, you have the base of a marzen with the pumpkin and spices added, both fall beers in one.

Look - copper color, two finger fluffy off white head, clear in appearance
Smell - pumpkin, candied yams, spice, cinnamon....smells delicious
Taste - This is where this beer falls off. You definitely get some pumpkin/spice notes but you also get like this soapy/sour type taste along with it.

Overall - There are better pumpkin beers out there to try.

12 oz bottle poured into a Sierra Nevada imperial pint. "Seasonal 2010", no other info.

Thanks to Thorpe429 for a few bottles of this! I've been looking forward to trying it since last year!

A - Pumpkinfest pours a beautiful brassy amber color that's brilliantly clear. From the tall pour, a noisy, effervescent bone head rose to two fingers. It sank down slowly but left no trace of lace on the glass.

S - Ripe pumpkin gourd wafts out of the nose with an allspice-heavy spice component. Nutmeg, ginger, and cinnamon all add contributions. Faint notes of sweet caramel come through but it purely smells of a pumpkin beer, not an Oktoberfest. It does smell much more like crisp pumpkin lager than an ale though.

T - Much more pumpkin in aroma and Märzen in flavor, the typical dry, metallic notes with the toasted malt comes through first and foremost. Pumpkin and its compatriot, spice, follow up but are merely an afterthought. The spice is felt more on the mouthfeel. Good Vienna malt backing, not real hop inclusion in this.

M - Crisp and refreshing, the lager qualities really shine through here. It's clean even with the lingering spiciness. The dry, lightly metallic finish is a little annoying but not enough to really damage my enjoyment of the beer.

D - The blend is good...save for the lack of pumpkin carry-over into the flavor. The nose is predominantly pumpkin while the flavor is Oktoberfest. The should marry the two with a better blend to become one great super-beer! Lakefront's Pumpkin Lager is a far superior pumpkin lager. This has a few adjustments to go before it gets to the next level but it's certainly drinkable as-is.

Tastes a lot like pumpkin pie spice, but not overly sweet. I thought it was a solid pumpkin beer.

12oz. bottle poured into an imperial pint. Thanks to BeerFMAndy for this one!

(S)- A good blend of spice (nutmeg & cinnamon) with some creamy pumpkin. Simple, but great for the style; not overpowering with spice.

(T)- Drops off alot from what the smell led me to believe. Subtle pumpkin is there, but primarily a bitter spice profile.

(M)- A good carbonation level. Spicy, with a present and sometimes annoying bitterness. A bit one sided than I would like to see.

(D)- Not bad. Far more spicier than what the smell led me to believe. The bitterness started to really bother me.

12 oz bottle poured into a pint glass at fridge-cellar temperature.

S – Bready and caramel malt, pumpkin, cloves, nutmeg, and cinnamon. Definitely a pumpkin pie beer with hints of an Oktoberfest.

T – Starts off with the sweet taste of the caramel malts and the pumpkin pie flavors (pumpkin, cloves, nutmeg, and cinnamon). The taste eventually shifts to bready and nutty malt flavors at the finish. Definitely equal parts Oktoberfest and pumpkin beer.

O – This is an interesting beer. It is definitely tasty and drinkable, and I think it’s a cool undertaking to combine two great fall styles – Oktoberfest and pumpkin beers. However, this beer is only an average example of each style. It doesn’t have the abundance of hearty malt aromas and flavors that I’d like in an Oktoberfest and it only has a mild and subtle pumpkin pie aroma and flavor. I’ve kind of run into this a lot with Terrapin when they try to combine styles, but they definitely get bonus points for trying and for creating a beer that is both tasty and unique.

Light medium body with a smooth texture. Normal carbonation level with a bit of effervescence in the middle and a nice prickly burst in the finish.

The flavor profile is good, but rather weak. Light pumpkin, light spice (so light I can't tell what it is), a hint of bitterness and a subtle sweetness that proves a very good balance. The finish is a slow fade of spiced pumpkin.

A: Poured deep amber, with a 1-finger head of golden foam; fair retention, not much lacing.

S: Pumpkin pie spice is the 1st aroma to hit me. Then a sweet, cake-like aroma. Floral hops are faint but detectable

T: The malt is only minimally sweet, with more of a rich flavor. Fresh pumpkin flesh flavors come through in the middle. The hops in the finish are a little more bitter than I'd like for the style, but by no means overpowering. The allspice, cloves, and other spice flavors are present start to finish, but not to the point of drowning out the pumpkin or beer flavors.

M: Clean and refreshing, although a little weak when it comes to carbonation.

O: Another tasty seasonal pumpkin beer, certainly worth another sampling.

A nice amber pour with 2 fingers of head. Best looking pumpkin ale I've had so far this year.
Smells of ginger, cinnamon, pumpkin pie.
holy crap this tastes like patchouli.. Lots of spices, floral.. Very nice very sweet.
medium body (on the lighter side), nice carbonation, slightly creamy on the lips - chalky on the roof.
as far as pumpkin beers go, this is the most unique do far this year. Very tasty.

This is a good example of a seasonal fruit beer, not overpowering, not too cloying - to my taste just right. Spike and the crew have done it again!

(thought i already wrote this review... but guess it got deleted?)

Pours a cloudy hazy, with little to no head, could have been the cask though. very hazy orange hue.

Pours a clear orange-amber with almost no head. Aroma is sweet malt, pumpkin, allspice and cloves. Taste is a wallop of malt, light pumpkin and an allspice/cinnamon spicy finish. Improved noticeably as beer warmed. Mouthfeel is fairly thin and moderately carbonated.
All things considered, a good pumpkin beer. 22 oz was plenty though.