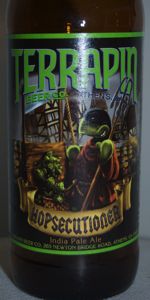 12 oz can. If I'm reading the julian date correctly, it's less than 2 months old.

Malt is the star of the show here. Same issue I had with their Hi-5 IPA. I don't get this beer. Very bitter, little hop flavor. A beer that's stuck in 2006.