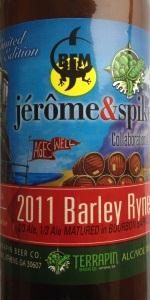 Nice dark amber color. Smell is of sweaty socks. No barrel on the nose. Taste is pretty much the same...sweaty socks, no bourbon, carmelly. A bit of a let down.

No label information. Jerome & Spike's 2011 Barley Ryne is brewed in the style of an English Barleywine, available in 22 oz. bottles and on limited draft. Vintage collaboration between Spike of Terrapin and Jerome of Brasserie BFM. Previously released through BFM, this version was brewed at and released from Terrapin, and partially barrel-aged.

(Appearance) Pours a short-lived dirty tan head over a densely hazy caramel brown body. Retention is below average with no visible lacing. 2.5

(Smell) Rich but accessible malt aroma of caramelized barley, candied sugar, fruit and rye grain for a robust malt profile. Some very distinctive barrel-aging aroma of raw oak but not much bourbon character to go with it. Potency is moderate. 3.5

(Taste) The taste directly follows the nose. Malt notes of barley, light caramel, fruit syrups, and distinctive rye body, with a drying barrel-aged finish, still not much bourbon. I enjoy it as a casual drinker, but it's nothing exceptional for the style. 3.5

(Mouthfeel) Texture is slick, residual, silky, medium dry. Carbonation is low with a mild frothiness and a very faintly crisp finish. Body is medium for the style, medium+ overall. Balance is slightly sweet over grainy booze and earthy bitterness. Alcohol presence is mild and there are no off characters. 3.25

(Overall) Although the bottle suggests that it "ages well", there wasn't much work that time needed to sort out with this beer. It's enjoyably flavored and quite the easy drinking English Barleywine, with the biggest complaints from me being a general lack of complexity (the rye malt was perhaps the only distinctive impact outside of style guidelines), and the barrel aging, which came off as a bit raw, lacking any bourbon character, feels tacked on top of the beer with less than impressive results. Enjoyable Barleywine but ultimately faceless against the competition, even with barrel aging treatment and rye grains included. 3.5

My first reaction was "oh no so sour." But it's grown on me. Smooth, dark brown with a hint of red, no carbonation. Rich mouth. Very sour on first taste with a sweet finish that balances it out. I wouldn't drink it every day but I enjoyed it more than I thought I would.

Came in a small fliptop bottle (I like these bottles for bottling homebrew gifts)
Poured into an Allagash goblet.
A direct smell of pickled, burnt cabbage soaked in rubbing alcohol permeated the air surrounding. My wife, who doesn't drink, exclaimed, "WHAT IS THAT SMELL?"
She insisted that the smell couldn't be beer as it was unlike any beer she had smelled before.
But, undeterred by the wretched and revolting "aroma", I took a deep swig.
A long-forgotten but instantly remembered taste of gin vomit I had puked up during a high school binge-drinking session flooded my senses. Only this was far worse!
I fear that this bottle had somehow become infected by some mutant bacterial fungus, or worse, Satan purposely urinated into the brew vat, fouling the whole batch up.
At any rate, if you must buy a bottle, you should purchase a HAZMAT suit and gas mask, then just pour it into an open sewer.

On the heels of the BFM version, Terrapin's collaboration Barleywine takes a more common flavor profile. Where that first one was sour and acidic, this one made with Terrapin's more traditional yeast gives the ale a succulent and sultry profile.

The ale pours with a heavy visual weight. Its slow separation of ale from froth reveals a tawny-brown body underneath with ribbons of mahogany and rust. What forms on top is a dense meringue of sandy-tan foam that sticks around for half the session with subtle lacing. The ale takes on brandy-like proportions as much as it does beer.

Plump barley aromas leap out immediately. Toffee, caramel, brown sugar and maple allow for a mild buttery note to provide a richer tone. Its slight barrel character offers mild toasted wood, coconut and vanilla. Its light earthiness might be oak, might be rye.

Then to taste, the beer's robust sweetness really opens up- toffee and maple seduce the front of the tongue with its moderate syrupy character. Dark fruits of plumb, fig and date- as the alcohol spice add complexity, it's not so much bourbon as it is spiced rum and sherry wine. Its savory flavors are balanced ever so slightly with herbal tea-like flavors, wood spice and toasty grains.

Its mouthfeel is lightly creamy and firmly chewy. Dense and deliberate, the beer's light carbonation allows the ale to sit weightily on the tongue in order to saturation the taste buds fully with its sweet booziness. Finishing with a long and sweet linger, the beer's aftertaste extends well into the next sip.

Seriously meant for after dinner sipping, the ale is heavily dessert-like and practically begs for a pairing with Stilton Blue cheese.

A 22oz bomber I have been aging for 2 years now. Collaboration with BFM and Terrapin

A - Dark amber, brown, with a bit of clarity. Looks like liquid brown sugar! 1 finger of head.

O - Very drinkable. A sipper, and it will warm you up, but smooth and tasty. Well done!

Im sampling a 2011 bottle at cellar temp poured into a snifter. The beer is a simple clear chestnut hue with garnet highlights.
A tightly packed beige head of 2cm fades to an edge layer and wispy island.

Aroma is big malty notes with some deep booze too. I get dark fruit, caramel, red grapes, bourbon and brown sugar. Rich and complex nose is very appealing.
First sip reveals a mild spacious carbonation and smooth yet sticky texture.
Flavor is rich and fruity with plums and dry wood and some spiciness. Maybe cinnamon?
Otherwise malty as the nose advertises with almost no hop presence to speak of anywhere. Caramel, brown sugar and a little warmth on the finish.
Quite a nice complex barleywine. I wish I had a second bottle.

Poured from 22oz bomber into a pint glass. The 2011 vintage ... already retired!

Smell: richly malty with dank cereals, raisins and a general murkiness. Complexity is low for the style, but I like the murk.

Taste: amazingly mild for the strength and style of this beer. A wet-cereal graininess, almost reminiscent of rye, is right up front, followed by fruits and mustiness. Not outstanding, perhaps, but a decent example of the style.

Mouthfeel: medium-rich body with a moderate carbonation and a good silkiness. Creaminess is not high, but it's serviceable.

Overall: totally decent and quite drinkable for its strength. I never had this beer younger than its current 2 years; perhaps mellowing helped its drinkability? In any case, I like it.