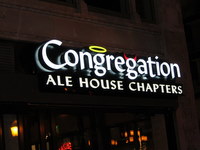 View: Place Reviews
Reviews: 19 | Ratings: 58 | Log in to view all ratings and sort
Reviews by lisomiso:

First, the place is great. Some serious money went in to putting it together, and it shows. The whole Catholic theme is fun (save the poor waitresses, who look pretty miserable in their ill-fitting school girl uniforms), and I dig the stained glass and dark wood.

Food's good, and a good value, especially during happy hour. I've liked everything I've tried. Nothing to write home about, but above average bar food for sure.

The beer selection is... good. They've got a load of taps. The problem is that I rarely find anything I'm particularly excited about... but I can usually decide on something I'm happy with. (Interesting wine list, too.)

Obviously the owners have put in lots of thought and money into the place. Why they decided not to hire anyone who knew the first thing about beer is beyond me. I went about a week after opening and the bartender - super nice and I totally liked him - admitted that he was new to beer. Problem is that I've been back several times and nobody has seemed to learn anything since. I asked the girl at the register if the cider they had on tap was dry and she looked at me with a face that said, "Uh, it's wet?" written all over it. Sigh.

Honestly, I think it's a management problem. I was served a Gordon's red in a 12oz tulip (?) with a four finger head (!!)... and paid (iirc) $6 for it. That's not ok. I actually tried to send it back but the bartender said, rudely, "It's not supposed to be filled all the way to the top." Yeah, thanks. The pours are embarrassing - and what's worse, it seems that they've turned down the CO2 to make it easier, so all the beers are a little bit flat.

It also looks like the employees are confused by HOW they are supposed to serve customers... There's an order-at-the-register plus half-table-service system going that doesn't seem to make a lot of sense to the employees OR the customers.

Rumor has it they don't cold-store their kegs - boy, I hope this is not true. I also vaguely remember hearing that they sat on a keg of Sculpin for a few months. Again, I hope I'm wrong - and I certainly could be.... But I just can't put it past them, either.

I really, really, REALLY want to love this place. I just don't. I keep going back in hopes of changing my mind, but so far, it's not happening.

Edit: I see a previous reviewer chatted with a girl who knew her stuff. Girl, I want to talk to you next time I'm in! Seriously!

Edit: After posting my review, I got a very nice email from Travis @ Congregation responding to it. I really appreciate his professionalism and while I still feel my scores are accurate, I want to add what he had to say in response.

He says that they have been trying to figure out the best way to provide service, and as it is a new place I totally understand that it's something that takes time to work the kinks out. Looking forward to them figuring out the system that works for them.

He admitted having trouble with short pours, and said he has been working with his staff to improve them (as well as working to educate his staff about beer, which is awesome). Last time I went I did get proper pours, so this seems to be true - and much appreciated. He also says they have not turned down their CO2 levels at all, but my Strand 24th St. Pale was rather flat last week.

He told me that their keg turnover is fast and since they've only been around a few months, how could they keep kegs around? He also did not address cold-storing kegs - and a friend of mine said when he asked at the bar they told him point blank they barely have enough room to keep the kegs on tap cold. Well, as long as the fresh hop-bombs go straight on tap, I won't complain...

Really cool vibe. The guy who helped us was proud of their beers and when asked a few pointed questions leapt into a "beer" conversation. Really advocated for us trying a few beers beyond what we had planned. Cool guy. A good variety of styles, and well chosen guest beers.

This place was great. Cool vibe inside and nice street side patio. Food was outstanding. Bottle and canned beer selection is extensive. Even the picky beer drinker should be able to find something here.

great place to grab a beer nice look as well can be packed with people sometimes and loud so definitely a hangout spot.

A great spot. A smaller selection then the Azusa or Pasadena location. Burgers are out of sight. Sunday Mass includes A pitcher of Bloddy Marys at a great price. Very easy access to public transit if you intend to put down a few and not want to drive.

This spot right next to Beachwood Brewing started out as my place to go when Beachwood was packed or had events. Slowly it became equally if not preferred to Beachwood as Beachwood's food as slowly gone down hill. What happened to your nachos Beachwood?

The draft list is hit or miss but most often hit. I've had Abyss, Knuckle, Alpine and numerous limited offerings in the past. There is always something good and interesting on the draft list. The food is as perfect as it gets for beer food. Brats, burgers, fries and tots many different ways with 8 sauces I can think of off hand.

I love how you place your card down and can order from anywhere. The service has always been good and the patio is the spot to be. There are also TVs for game nights.

Great spot overall that I will continue to frequent.