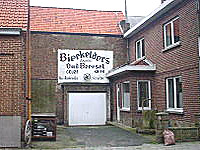 Although I have been here several times over the years, my most memorable trip was when I first came here during my first ever trip to Belgium in 1994. We were staying in Ostende and caught the Train down to Brussels & then onto Beersel (it was a weekday). After visits to the Drie Fonteinen and the Drie Bronnen we headed out on the good 1-2km walk from the town center of Beersel, to find the Bierhuis Oud Beersel, or the OB Café as we called it. Walking in the peaceful country surrounds it took us a little while  we just followed the signs for Oud Beersel 1882. Most Bars & Cafés in the center of Beersel will be happy to give you detailed directions if needed. But you really cannot miss the superb black, red & white tiled frontage which announces the Oud Beersel "brewery tap". This legend of Payottenland Cafés is actually situated right next door to the Brewery which also acts as a Heritage Museum (#230), and is the best place to sample the beers in my humble opinion. Inside is the Café that time forgot, it was rather quiet with only a handful of people all speaking a folksy Dutch whilst they sat in a darkened wooden interior with only the streaming Easter sunshine to light air. The waitress offered us Pils at first I remember. But we told her we wanted Lem-beek in a poor Anglo-Dutch accent. The lambic beers here are unswervingly traditional. The Oud Beersel Lambic that was on draft on my first visit was 18 months old & was incredibly flat & musty; like liquid mushrooms in a glass  Excellent, sheer Heaven! The Geuze & the Kriek were served from 750 Bottles which I shared with friends. The latter is acidic, astringent & very sour, yet the Geuze was surprisingly soft. The Kriek was most popular & was one of the best we tried that day, & at ~7%, one of the strongest available. Bottled Beer can be bought here for take out also. The ones I bought had no labels just pink and white painted sash marks. I fell in love when I first came here, and it kept me returning whenever I was in Beersel. I especially enjoyed the quiet, yet almost surreal surroundings of the Café. Surreal??  Well, just ask the bar staff to play the huge 1930's Dutch Fairground Organ in the back room, hold onto your beer though!!!!

**UPDATE** 12/31/03
I visited here again the last week of November 2002. It was not open as I had expected, but I did not know at that time that it had closed its doors for good. Following the closure of the Brewery, the Oud Beersel Café has now been sold, along with the astonishing 1932 Mortierpijp Dutch Organ to which I referred above. The Organ has allegedly been shipped to the US, huh - where else?!? Sadly, it is now a Flower Shop. The world does not need another Flower Shop, but it will most definitely miss the demise of yet another traditional Lambic Café that now disappears into the mists of time only to be remembered on reflection by those of us who came here.

Strangely, during the last time I was here in November 2002, as the Café was closed, I decided to take the opportunity to take a closer look at, and some Photographs of, a Monument that lies opposite the Bierhuis OB Café. It is dedicated to all of the extinct lambic breweries that once filled the area. This is now somewhat very sadly ironic.

Motto of this Story:
Visit the remaining lambic Cafés - whilst you still can!!

Bierhuis Oud Beersel in Beersel, Belgium
Place rating: 4.53 out of 5 with 1 ratings