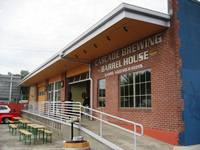 4.8/5  rDev +5.3%
vibe: 4.5 | quality: 5 | service: 4.5 | selection: 5
Humble yet formidable, blessedly untrendy temple of the Tart Arts. Splendiferous list of inventive barrel sours (some upwards of 8 years old and all the better for it). Old World knowledge and homebrew playfulness on display. Severly underrated—both in Portland rankings and national sour landscape—likely as a result of Web-1.0-era optics.
May 25, 2018
Rated: 4.25 by psoriasaurus from Thailand

Reviewed by Taybeh from Minnesota

4.63/5  rDev +1.5%
vibe: 4.25 | quality: 4.5 | service: 5 | selection: 5 | food: 3.5
What a cool place! The clean, spacious interior is light colored and wood-centric with booths, high tops, a medium bar, and a few muted TV screens. Outdoors there is a huge urban beer garden--Portland really knows how to do the beer scene! Walk up to the bar and place your order, or belly-up and watch the action, which amps up rather shortly after open.

Reviewed by BeanBump from California

4.89/5  rDev +7.2%
vibe: 5 | quality: 5 | service: 4.75 | selection: 5 | food: 4.5
Sour beer heaven. On a recent trip to Portland, I made sure to stop by Cascade 3 times in as many days. I regret nothing. World-class sours a-plenty! On any given day they offer about 20 beers, 17 or so are sours and you honestly cant go wrong. I did stray from the sour path ever so slightly and tried a milk stout as well and it was also fantastic. Clean tasting room, friendly staff and you cant beat the selection. When in Portland, this is a must.
Sep 21, 2017
Rated: 5 by CB2maltygoodness from District of Columbia

4.76/5  rDev +4.4%
vibe: 4.5 | quality: 4.75 | service: 4.75 | selection: 5 | food: 4.5
Visited by myself on a business trip. They don't do flights but you can order 4 oz'ers two at a time. The waitress asked what I wanted and I said, "All of them." So for the next 90 minutes every time she looked my way I held up two fingers and she brought two more - kind of a fun interaction really and I certainly benefited from a little pacing. Alas I was not able to finish a sample of everything (seemed like around 20 taps) but the waitress gave me an "A" for effort. Bottom line I've been to several of the well known "sour houses" and this one had the most consistently great stuff. Food was really nice too - I got some kind of cold asparagus salad and bruschetta which really paired well with the sours. Not as stuffy as you might expect from a place with such high quality beer. And an easy walk back to the trolley line which connected with the light rail back to my hotel which allows one to safely attempt to consume all their beers without getting behind the wheel.
Apr 20, 2017
Rated: 4.93 by Junichi from Texas

Reviewed by DallasK from Oregon

4.78/5  rDev +4.8%
vibe: 4.5 | quality: 5 | service: 5 | selection: 4.5 | food: 4.5
Cascade is a real gem. Great in all areas. Food is good and pairs well with the main course, the sour beers. The service is amazing even when busy and their is plenty of outdoor seating. Favorite summer spot. Only downside for some is all of Cascades offerings are world class sours bar a single ipa and porter that are average.
Jan 03, 2017
Rated: 4.6 by BeerMeCJS from California

Reviewed by Koral from Minnesota

4.94/5  rDev +8.3%
vibe: 4.5 | quality: 5 | service: 5 | selection: 5
Any of the beers on tap at the Cascade Barrel House would be the best beer on any tap list in any other restaurant/bar/brewery. This place is the best brewery in the states, hands down. Nobody else's sours come close to these magnificent beverages.
Aug 05, 2016

Rated by TheBasedElliot from Minnesota

Reviewed by edhizdeid from Washington

4.15/5  rDev -9%
vibe: 3.5 | quality: 4.5 | service: 3.5 | selection: 4.5 | food: 4.5
Nice location with a very enjoyable patio. I am not especially thrilled with the service there. I was told to sit down and waited at least 10 minutes before a waiter showed up. At that point, they were in a hurry to have my wife and I order even though the place was nowhere close to full (Considering the other reviews I read, we may have been unlucky this one time). The beers lived up to the standard I expected (very good) and my wife was happy with the IPA she got (not a sour fan). Food was also very nice.
Jul 21, 2016
Cascade Brewing Barrel House in Portland, OR
Place rating: 4.56 out of 5 with 256 ratings