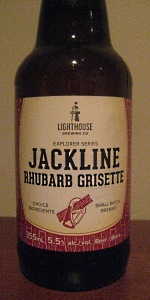 Lighthouse Brewing 'Jackline Rhubarb Grisette' @ 5.5% , served from a 650 ml bottle purchased for $6.50
A-pour is a light gold from the bottle to a clear light gold in the glass with a large white head leaving a fine spotty lace along the chalice
S-pilsner malt , wheat saison
T-can't really taste the rhubarb
MF-lots of carbonation , medium body
Ov-better than just an ok beer
prost LampertLand

S: A little bit of Belgian yeastyness with saison-like aromas, but very clean and bright.

F: Overly fizzy mouthfeel on this one, not a fan.

O: Solid, average saison. The rhubarb saves it from mediocrity.

Pours a pale pink with lot's of frothy head. Smells slightly like sweet dough with a hint of floral and fruit. Really liked the taste. The slightly sweet, not over-the-top tartness adds nicely to the sweetness of this style.
A definite summertime patio refresher if one could actually get a fresh pint on a sunny patio in good old Victoria

Appearance - Pours a light straw with a finger width of bubbly white head.

Taste - Predominantly rhubarb and biscuity malts. A little bit of the Belgian yeast, clove, and lemon are present, but they are all so light that they are easy to miss.

Overall - A lacklustre brew whose saving grace is the rhubarb. I wish there was more variation and intensity from the ingredients, rather than the one note of rhubarb and malts.

355ml bottle, part of the current Lighthouse mixed-pack. Grisette, as a style, appears to be pretty much the same thing as a Saison, but aimed at workers other than those on a farm. At any rate, all this can be avoided here, simply due to the brewer's use of rhubarb in the recipe.

This beer pours a clear, very pale pink-tinged golden straw colour, with a teeming tower of puffy, loosely foamy, and quite fizzy off-white head, which leaves some layered soapscum lace around the glass as it gently subsides.

The carbonation is rather involving with its multifaceted effervescence, the body just on the south side of medium weight, and mostly smooth, that yeast tripping about at times. It finishes on a drying trend, the malt fizzling out, while the lingering ethereal rhubarb and stolid yeast keep 'er straight and true.

Kind of a simple-seeming Saison, is what I get from this, with an extra 'baiser' of garden patch tartness. Not all that interesting, save the historical brewing context, but I suppose I'm glad I got to try it.

Jackline Rhubarb Grisette from Lighthouse Brewing Company
Beer rating: 84 out of 100 with 24 ratings