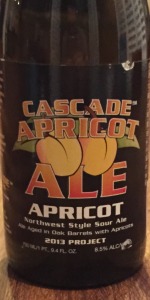 Notes: This NW style sour blond ale was barrel aged for up to nine months, then aged on fresh apricot for an additional six months. Aromas of sweet apricot blossoms and tart fruit are present as you draw the glass near. Deep, rich apricot flesh, then tart apricot notes dance on the palate and lead to a sweet apricot flesh finish with a lingering fruit tartness.
View: Beers | Place Reviews
Reviews: 313 | Ratings: 1,807 | Log in to view all ratings and sort
Reviews by DarthKostrizer:

Muchas gracias to Jeff for cracking this with me... I love Cascade sours and apricots, so the combination should be orgasmic. Pale amber and kind of "peachy" all-around; foggy and cloudy throughout the body with only a touch of visibility to the other side of the glass. A nimbus-like head forms and grows quickly, then recedes just as fast to a silky skin atop the apricot brew that lasts for over half the glass. No lacing, no legging.

A fantastic arrangement of fresh, farm-market apricots explode upon bringing my nose to the brew. The fruity elegance is broken up by a solidifying tartness; sour, juicy, and lactic. The sourness seems to grow with each and every successive whiff, as does the acidity. Not much in the way of actual vinegar, but some vinous-oak notes reside faintly in the background. It smells fruity, it smells tart. Now I can only hope it tastes that way, too.

Well, my hopes for a sour beer were certainly met! One sip and I'm already puckering and wincing from the onslaught of lactic and acetic acid. The fruit character is astoundingly tasty, gushing with ripe apricots, lemon-juice, and maybe a hint of white grapes. Cascade Apricot is definitely a bit vinous in flavor, as the oaky and wine-like notes buckle down and start hitting the palate hard. Dry oak, damp hay, must, and horsey-funk are strong in the finish, along with the apricot's kiss of death.

Unlike the nose, the flavor also shows heavy vinegar characteristics, as well as a substantial amount of acidity. The taste is amazing, but this shit will burn a hole in your stomach lining. Granted, I had consumed a few other sour beers before this one, but each sip of Cascade Apricot left a burning feeling in the pit of my gut; I'm sure I was pushing ulcer-like levels of acidity down there.

So juicy, refreshing, and tasty, despite the fierce acidity. I was at such a personal crossroads with myself - so goddamn tasty that I couldn't stop drinking it, but I knew I would pay for each and every sip. WORTH IT. Pretty thick and heavy-bodied for a wild ale, but most of Cascade's offerings seem to be a bit stronger and heavier than those of other brewers. Lively carbonation, slick, wet, and crisp mouth feel.

All around, this is really a fantastic beer. The flavors are great; fruity, juicy, quenching, tart, mildly funky, oaky - complex and refined. Really my only large complaint is the fact that your stomach might have an easier time handling battery acid than this stuff. Although I'm not ready to blame my entire abdominal agony on this beer since it wasn't the only sour of the night, you could definitely feel each sip as it went down. But there's no doubt that I'd gladly suffer for this one again, it's far too tasty to pass up.

It pours a hazy light orange, with lots of visible carbonation, and a pretty big 1.5 inch head, and a little bit of lacing.

This one smells profoundly sour, tons of funk and lactic acid, a bit of vinegar, with a good helping of apricot too.

This is one brow-beating sour. We had West Ashley and Fou Foune in the same night, and this one couldn't hold a candle to either of them, as both were much more subtle than this one. Looking at this one on it's own merits is much better. It's bracingly sour, in every way, I get sour wine, sour apricots, sour oak, and sour lemon, tons of lactic acid, some white wine vinegar, etc. It tastes good, but it's definitely not subtle, or elegant. It's a big brash bruiser of a sour.

This is medium bodied, with a tangy, crisp mouthfeel, and a fairly high level of carbonation. It's a slow sipper due to the intense sourness.

This is a very bold sour, but I do tend to prefer the more nuanced sours.

A - Amber/golden body with a thick white head. Head settles to about a quarter inch thick and persists throughout.

S - Very similar to a fresh hard cider. Apricots/pears come through as the beer warms up. Moderate funk and slight lactic acid balance out the big sweet fruity vinous aroma.

Poured from 750ml bottle into glass. Labeled as '2015 PROJECT'.
Clear, apricot gold colored body. Surprising long lasting white head, which leaves behind strings and webs of lacing.
Tart aroma of lemon and apricot, along with oak barrel.
Effervescent taste of apricot and sour fruit, along with the oak barrel. Quite sour but not the feeling that it scrapes the teeth. Rather dry.
Bubbly, fizzy mouth feel, lip smacking. Good carbonation.
Outstanding apricot sour. Tannic and acidic at the same time.

Bottle thanks to brewbetter, poured into a Hill Farmstead stem.

Smell: Big apricots and lactic sourness up front. A nice funk I was not expecting, as well as some lemon pith and pear skins. A light white vinegar, but most of the sour is characterized by the lacticity.

Taste: Follows the nose with big apricot skin and must, as well as sharp lactic sourness. Sourness isn’t overpowering, but quite nice. A light bready sweetnes comes in. Finishes sour with pear skins.

Overall: Wonderful beer. Like Fou Foune sans the classic Cantillon funk. I loved this and will be seeking it out again. Thanks Neel!

A: poured an ice tea brown with a thin head and good sticky lacing on the glass.

S: I'm getting more of a acetic aroma with very faint apricots and oak notes in the mix. I kinda get a little vinegar as well after a couple whiffs.

T: mild tart acetic apricot backbone with oak accents like the nose but not really to sweet to throw off the balance in the beer.

D: I always enjoy cascade beers and this one is no exception. Glad that I've been able to try this brew a couple times.

DoubleDaisyCutter from District of Columbia